Ignite’s Stock Chart is Looking Primed for a Potential Breakout

First off, let’s make something clear right away. This article has nothing to do with Ignite’s fundamentals, its a purely technical analysis of the company’s current stock chart formation. Ignite International Brands (CSE: BILZ) (OTCQX: BILZF) very well might be overvalued at current levels but that doesn’t mean the stock can’t experience a short term technical breakout to higher levels.

Many circumstances can temporarily inflate or deflate a company’s share price and the fact that Ignite’s CEO Dan Bilzerian started promoting the company to his many millions of followers on social media is likely the driving force behind the recent surge higher. In our last article, we highlighted the company’s new OTCQX: BILZF listing and the social media posts by Bilzerian that sent the stock into low earth orbit. Bilzerian’s posts led to a huge influx of new buying which caused shares of BILZ stock to get temporarily halted by IIROC.

The halt did little to slow the momentum as Bilzerian’s followers continued to gobble up shares at inflated prices. The stock has since pulled back by roughly 15% leaving some new shareholders wondering if they got left holding the bag. Good news for those shareholders, there might be a saving grace in the works that could allow BILZ investors to exit the stock with a nice profit before a possible downswing takes place.

Ignite’s stock is currently at the tail-end of what chart technicians call a Bull Pennant chart formation. Bull pennants are very similar to bull flags, the only difference is the shape of the pattern. Everything else is nearly identical.

According to Investopedia, a bull pennant is a “continuation pattern in technical analysis formed when there is a large movement in a security, known as the flagpole, followed by a consolidation period with converging trend lines – the pennant – followed by a breakout movement in the same direction as the initial large movement.”

The initial breakout forms the flag pole and the period of consolidation that follows creates the pennant. A proper pennant is created when the battle between the bulls and bears grows more even and the top and bottom trendlines gradually slope inward toward one another. The two trendlines will eventually meet up at a point called the ‘apex’. As the share price approaches the apex of the pennant, volume should begin to pick up as the stock prepares to breakout above the upper trendline. In very bullish markets, it’s common for a stock to break out early, well before reaching the apex. We are not in one of those markets right now so we don’t have to worry about that happening here.

Once the stock breaks out, look for the share price to close above the top trendline on a similar spike in volume as the original breakout. One additional point to be aware of, it is not uncommon for the stock to retest the breakout point from the upside before continuing higher towards its price target. Many conservative traders use the hold of the retest point as their confirmation to enter the trade. This is why the stock usually pops a second time fueled by the new set of traders entering the stock.

Speaking of price target, let’s go over how to calculate the price target of a bull pennant chart pattern. See the chart below for visual reference. 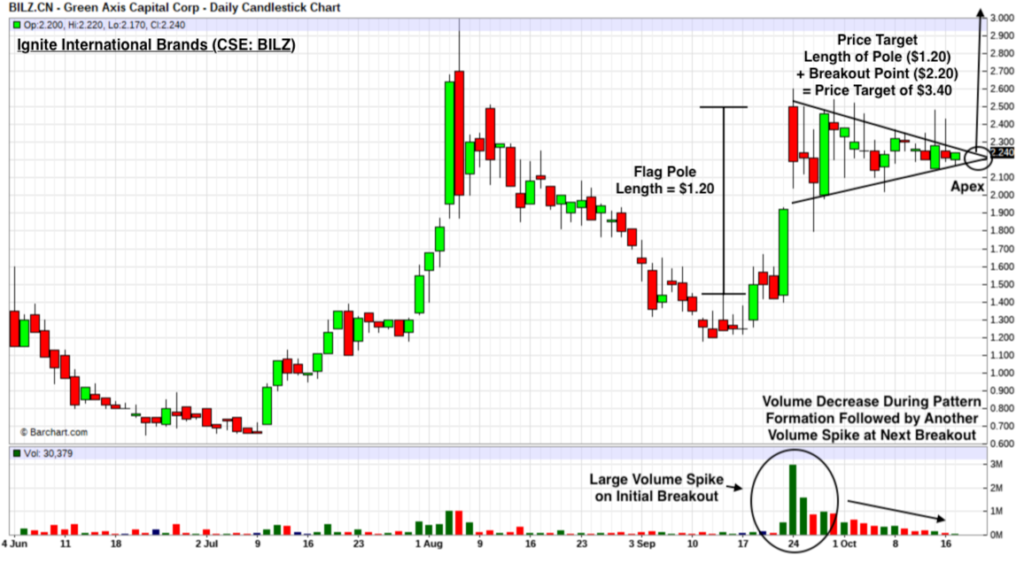 Use this information as a blueprint for your future trades. The formula can be applied to any stock with a bull pennant or flag formation. There is no guarantee the trade will work out perfectly every time but it will help put you in a position where the odds are stacked in your favour. If the stock closes below the bottom trendline it may be worth keeping a closer eye on it as the chances of a failed pattern go up.

External factors such as market conditions and macro events can throw a wrench in even a seemingly perfect plan. Other factors such as bad news, dilution or a large seller can also mess with a chart pattern. That is why it’s key to use a stop-loss to avoid getting caught with your pants down.

I’ll leave you today with a past example of a bull pennant formation that played out almost perfectly. 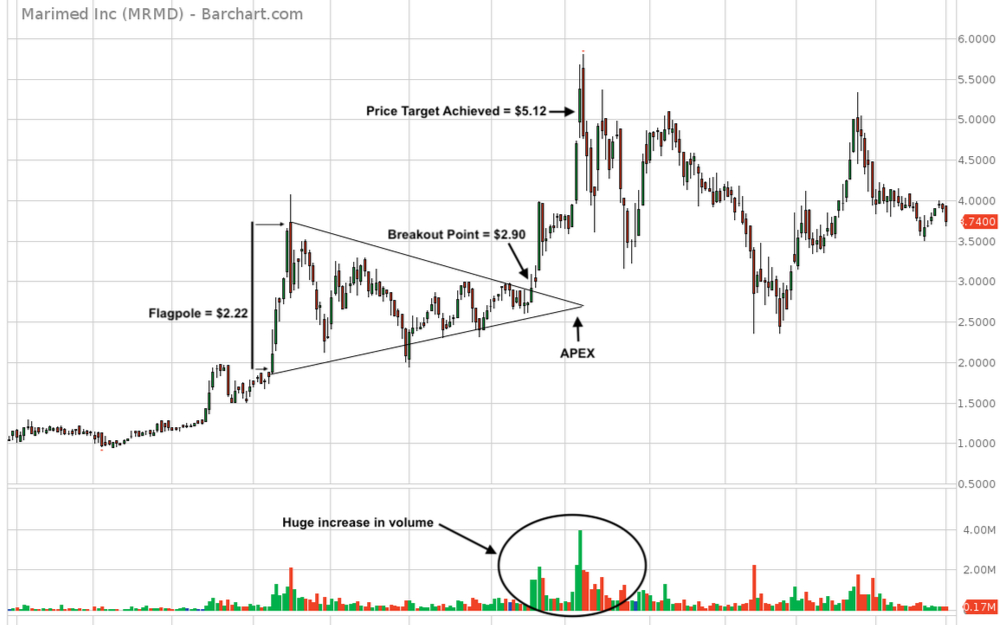 If you are interested in learning more about investing in the booming cannabis sector, grab a copy of our Ultimate Cannabis Investing Guide. It’s packed with tons of information to help you navigate the burgeoning industry while avoiding the pitfalls along the way.