The company describes its new high-end vodka as being gluten-free and distilled from corn using blends of only the highest-quality ingredients. Ignite’s vodka will be made in New York and the company intends to distribute its nationwide.

“We’ve been hard at work perfecting our products for our consumers, and with the introduction of vodka, we’re continuing to push the envelope and disrupt the beverage category with our premium quality products,” stated Curtis Heffernan, President of Ignite International Brands.

The company says it plans to make its vodka available for purchase at various retail locations throughout the United States such as convenience stores, grocery stores and specialty retail shops.

“We’re excited to add vodka to our portfolio of premium products and introduce a spirit that meets the high industry standards the IGNITE brand is known for,” added Heffernan.

Bilzerian and Ignite’s social media influence gives the company a huge marketing advantage over its competition. Online advertising in the cannabis industry can be a difficult task due to federal marijuana prohibition in the U.S. Many websites such as Google and Facebook adhere to U.S. federal laws and therefore won’t allow cannabis companies to run paid ads on their advertising platforms.

While other cannabis companies are struggling to get ads approved, Bilzerian/Ignite can reach many millions of consumers organically with one Instagram post that costs them virtually nothing. Even if it was possible to replicate that type of reach with paid ads, it would likely be extremely expensive.

Shares of Ignite’s CSE listed BILZ stock received a modest boost today following this morning’s IGNITE vodka announcement. BILZ closed today’s trading session at $1.39 per share, up 2.21% on the day. South of the border, the company’s U.S. OTC Markets listed BILZF stock closed the day up 0.49% at $1.03. Overseas in Germany, Ignite’s Frankfurt listed shares traded in the opposite direction and closed the day at $0.90, down 14.29%.

Looking at the BILZ stock chart below, recent price action has been rather uneventful as the stock continues into its third month of tight sideways consolidation. As mentioned in our previous Ignite article, BILZ is still holding its $1.30 support level which is good for bulls. Periods of tight consolidation like we are seeing with BILZ are usually followed by a strong move in either direction and fueled by a large spike in volume.

Whether BILZ breaks upward or downward will likely depend on market conditions and the type of catalyst that initiates the move. Keep an eye on trading volume as it will normally precede any move in the stock’s share price. 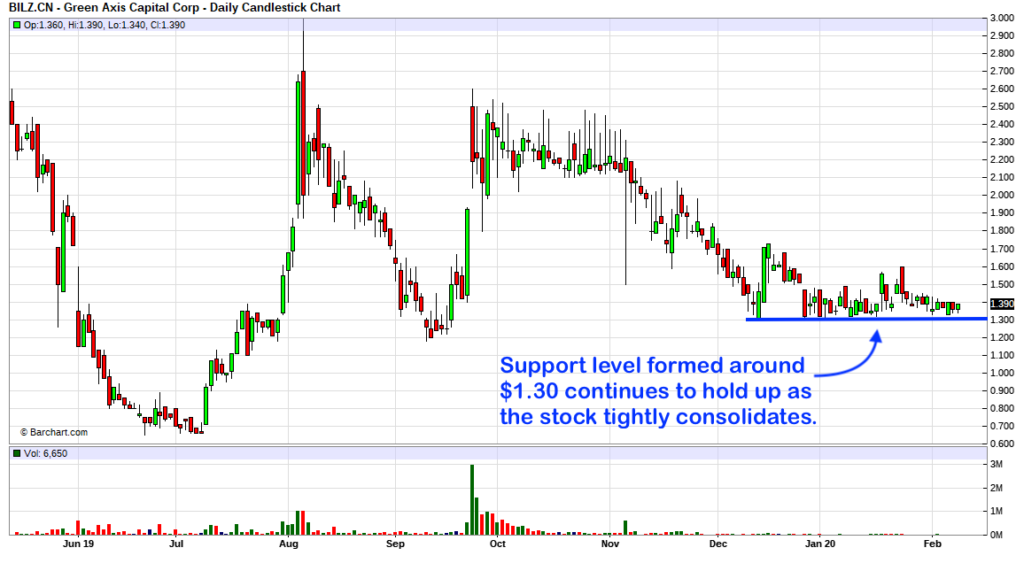 Disclosure: Ignite was previously a client of The Cannabis Investor. TCI does not hold a position in any of the stocks mentioned in this article.