Sanders Vowed to Legalize Cannabis in All 50 States on His First Day in Office, Here’s How He’d Do It

The U.S. Will Literally ‘Feel the Bern’ if Bernie Sanders is Elected President in the 2020 Election

“Feel the Bern” just took on a whole new meaning after the 2020 Presidential candidate’s recent comments on the subject of cannabis legalization in the U.S. If elected as the 46th President of the United States, Bernie Sanders vowed to legalize cannabis in all 50 states on his very first day in office.

By legalizing cannabis on day one in the White House, Senator Bernie Sanders (I-Vt.) — one of leading 2020 Democratic presidential candidates — has pledged to let America burn freely if he’s elected.

“We will end the destructive war on drugs,” said Sanders, at a rally in Cedar Rapids, Iowa. “On my first day in office through executive order, we will legalize marijuana in every state in this country.”

Sanders went on to explain that for his administration, it wouldn’t be just about ending cannabis prohibition, it would be doing so in a way that benefited the vulnerable communities that have been harmed by the decades-long war on drugs.

“We will move forward to expunge the records of those arrested for possession of marijuana,” said Sanders. “And we will make certain that the legalized marijuana industry is not controlled by a handful of corporations but that those people — the African-American community, the Latino community, the Native American community — those people who have suffered the most will get help in order to make money through a legalized marijuana industry.” 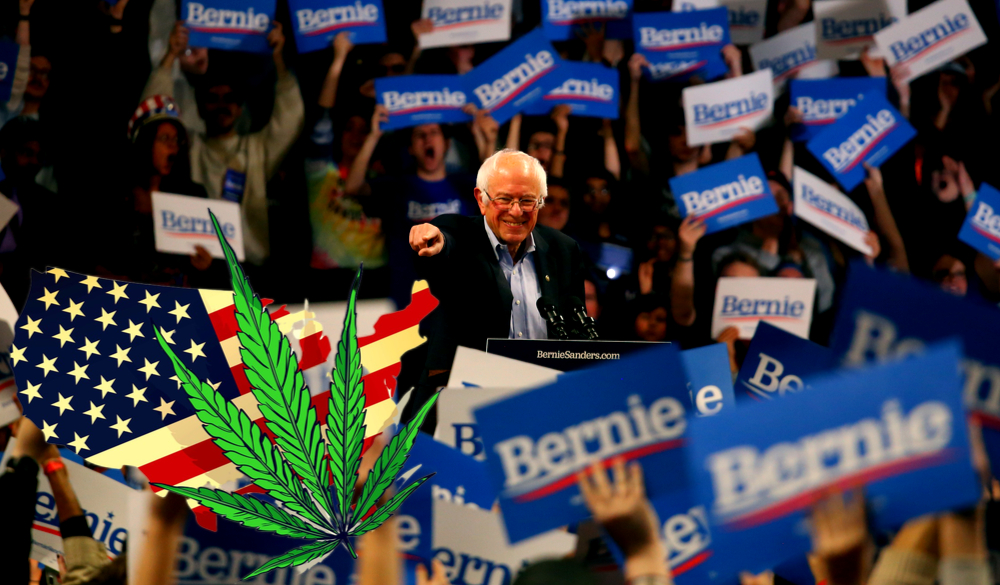 Could it Really Be Done?

While ‘Day One’ promises sound great on the campaign trail — especially when they involve legalizing cannabis! — it remains to be seen if Sanders would actually be able to get it done. While the Controlled Substances Act grants the U.S. executive branch the authority to reclassify cannabis without action from Congress, unilateral federal legalization of cannabis wouldn’t likely happen hours after being sworn in.

To remove cannabis from the list of Schedule I drugs at the federal level, both the U.S. Attorney General and the Health and Human Services Secretary would need to be involved — and these Sanders designees likely wouldn’t be in place on Day One. Furthermore, international drug treaties could impact a decision by an administration to legalize cannabis federally, and in terms of legalizing cannabis in every state, a president can do little to repeal local laws.

Given all of the hurdles to legalizing cannabis on Day One, it’s no wonder that Sanders joked about what he’d tell his wife on inauguration day: “I’ll be home late, my dear.”

The Pot Plans Are in Place

Despite the obstacles, Sanders is serious about his cannabis promise. The Washington Post recently reported that Sanders’ campaign aides have included legalized cannabis in a list of executive orders to be completed in the first year of a Sanders presidency.

While Sanders did cover some of this ground in his 2015 bid for the Democratic nomination, this time around he’s even more sure of his position. 2020 has seen Sanders propose one of the boldest cannabis legalization plans in the campaign, going from the 100-day promise announced last fall to the recently announced Day One promise, coming in advance of the critical Iowa Caucus.

When it comes to ending the prohibition of controlled substances beyond cannabis, Sanders falls short of some rival candidates, including Andrew Yang, who supports the use of Psychedelic psilocybin mushrooms among military veterans. While Sanders offers broad support for ending the war on drugs, he admits he’s not yet sold on legalizing controlled substances beyond cannabis.

Regardless of his reluctance to extend support to legalization beyond cannabis, the fact that one of the frontrunners for the Democratic presidential nomination is a stout supporter of federally legal cannabis is a major step forward.

If somehow Bernie Sanders pulls it off and wins the presidency, you can guarantee, Cannabis Stocks will be “Feel’n the Bern” in a major way!

📢 The Cannabis Sector is Long Overdue for a High-Profile IPO

📗 Get Your Copy of The Ultimate Cannabis Investing Guide