Even after the industry cratered in 2019, there are many cannabis companies still carrying lofty valuations. While many of these companies continue to claim that the growth in revenues and profits to justify their huge market caps are just around the corner, many have come to the conclusion that these firms were simply over-optimistic. Whether it be access to capital or oppressive regulations, many cannabis stocks simply aren’t giving investors the appropriate bang for their investment buck.

However, not all companies are hugely overvalued. Some carry valuations much more in line with their short-term prospects. These are the companies that stand to deliver outsized gains to investors in the current cannabis market. One such company just acquired a leading cannabis extraction company and appears ridiculously undervalued to its peers.

Hollister Biosciences is a Hidden Gem That’s No Longer Hidden

Hollister Biosciences (CSE: HOLL) (OTC: HSTRF) (FRA: HOB) is a producer of cannabis and marijuana products for California’s medical and recreational markets. The company’s headquarters is located in Hollister, California, a rural town just outside the San Francisco Bay Area. The region is well known for its agricultural industry, and Hollister is the first cannabis company to set up shop in the area.

Hollister has a distribution deal with Indus Holdings (CSE: INDS) (OTCQX: INDXF) to distribute its products to over 350 dispensaries throughout the state of California. The company sells an assortment of value-added products, under a variety of brands. Hollister’s current brand lineup includes:

Hollister also has proprietary technology in NanoPure, which increases the bioavailability of cannabis products resulting in fewer cannabinoids needed to achieve the desired result. NanoPure allows for a better controlled “high” in edible products, which are notorious for having unexpected effects. Essentially, NanoPure causes cannabinoids to work faster and in a more controlled manner, meaning the user’s high comes quicker, ends faster, and has less ups and downs. The predictable experience that NanoPure can provide is certainly something that many users desire.

Hollister’s management realized that its company lacked a recognizable brand in the cannabis oil and concentrates sector, so the company struck a deal to purchase Venom Extracts, a premium extraction company. Venom Extracts is leading manufacturer and purveyor of cannabis concentrates and cartridges in the Arizona market. Hollister officially closed the Venom Extracts acquisition on March 30, 2020. Venom Extracts brings with it 2019 revenue of $16.4 million and EBITDA of $2.5 million, significantly strengthening Hollister’s fundamentals, putting the company on the fast track to becoming a cannabis industry leader this year.

The Venom deal is transformational for Hollister, as the company can now lay claim to being a multi-state operator (MSO). The move is also a good one for Venom, as its management team had been looking for an avenue to enter the California market and ultimately decided that joining forces with Hollister was a win-win situation for both companies.

Hollister’s Stock is a Bargain

The Venom deal gives Hollister its first major revenue-generating brand. As previously mentioned, in 2019, Venom Extracts brought in over $16.4 million in revenues and $2.5 million in EBITDA. Hollister expects to quickly ramp up Venom sales in California, while continuing to grow the brand in Arizona, which looks poised to legalize recreational cannabis soon. According to management, the Venom acquisition will push Hollister’s 2020 revenues to over $25 million.

$25 million is a substantial amount of revenues for a company of Hollister’s size. After factoring in the acquisition of Venom, the company should have a market cap of roughly $40 million. This gives Hollister a price to sales ratio of 1.6, which ranks the company near the bottom of the price to sales comparison chart below and firmly establishes Hollister as one of the most attractively valued U.S. cannabis stocks in the entire sector.

The only pot stocks on the above list that carry a lower price to sales ratio than Hollister have all been experiencing severe financial issues, resulting in their lower valuations. Acreage Holdings (CSE: ACRG.U) (OTCQX: ACRGF) (FRA: 0VZ) is tied to Canopy Growth (TSX: WEED) (NYSE: CGC) (FRA: 11L1), which has been getting punished as a result of the botch adult-use retail rollout in Canada.

MedMen (CSE: MMEN) (OTCQX: MMNFF) (FRA: 0JS) has been hemorrhaging cash and selling off assets after paying its management vast sums of money. Milestone Investments, one of MedMen’s lenders, is allegedly demanding that MedMen co-founders, Adam Bierman and Andrew Modlin, as well as current CSO Christopher Ganan hand over the key’s to their homes over a loan gone bad. The three MedMen execs reportedly put up their homes to backstop a loan that is now in default.

iAnthus (CSE: IAN) (OTCQX: ITHUF) (FRA: 2IA) has a tremendous debt load and cash issues of its own. In total, iAnthus currently has over $159 million in debt obligations, which seem to have finally caught up to the company after it was recently reported that iAnthus defaulted on its interest obligations.

For some investors, the hefty price to sales ratios certain companies carry are deserved, thanks to exposure in more states and a larger footprint overall. However, as we’ve seen recently, growing too large, too fast, has proven to be a terrible mistake for many cannabis companies. It’s costly to get the licenses and build out the necessary infrastructure in each state a company wishes to operate in. That’s why the best-performing companies, like Trulieve (CSE: TRUL) (OTCQX: TCNNF), are focusing on dominating a single state. In Trulieve’s case, the state is Florida.

The single-state route is the one Hollister intends to focus on. While Venom operates in Arizona, Hollister will be primarily concerned with bringing the brand to its home market of California. With federal legalization unlikely in the near-term, focusing on California will allow Hollister to establish popular brands and profitable operations that it can then export to the rest of the country when the feds catch up to the states. 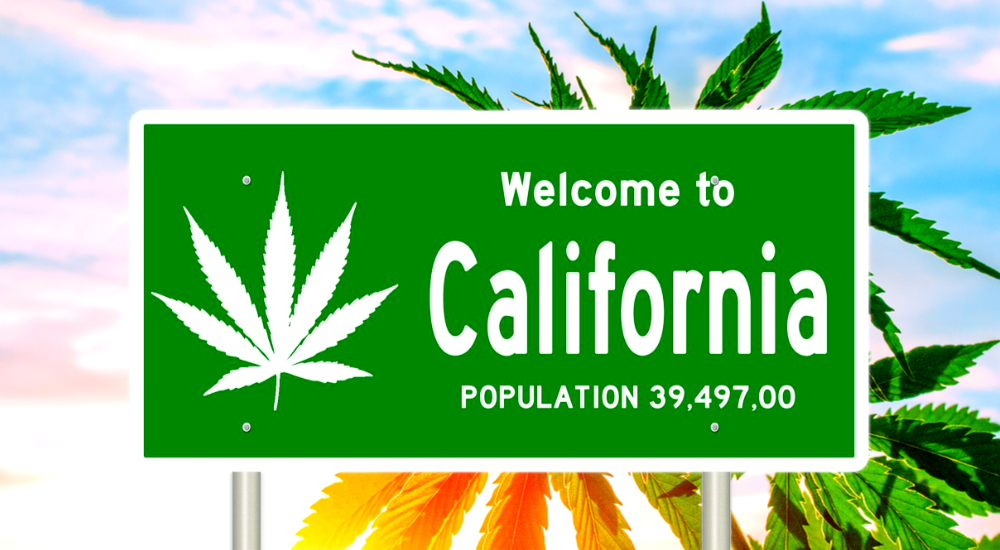 California, also known by many as the Golden State, is the crown jewel of the global cannabis market. The approximately 80 million people that either live in or visit the state yearly spend billions of dollars on cannabis each year, making California by far the largest marijuana market in the world. Hollister Biosciences knows that the best way to penetrate this market is by establishing popular brands in leading segments of the industry. The company’s deal to purchase Venom Extracts gives them a proven, profitable brand in one of the most popular sectors of the industry.

Hollister’s resulting valuation relative to other U.S. cannabis stocks indicates that Hollister’s stock can currently be purchased at a significant discount to its peers. Don’t expect this to last long though. Once it begins to rollout Venom branded goods, as well as the other products in its pipeline, across California, investors will increasingly take notice. Increased attention, revenue growth and profitability is a sure recipe for an increasing share price.

Hollister announced in mid-March that it plans to enter the booming Psychedelics sector after the company reported signing an LOI to acquire Alphamind Brands. Alphamind is a psychedelics company operating in the legal medicinal mushroom and Psilocybin (Magic Mushrooms) markets.

Alphamind is currently conducting R&D for Psilocybin pharmaceutical applications as well as developing several exciting new medical mushroom products. Alphamind has operations in both the United States and Canada. Once the Alphamind acquisition closes, the deal will further diversify Hollister’s operations while at the same time increase shareholder value.

Since bottoming at $0.04 in early April, Hollister’s stock has soared as much as 212.5% off its lows. In our previous Hollister article dated March 30, 2020, we informed our readers that HOLL stock was way underpriced due to the Coronavirus market correction and was currently presenting investors with an incredible opportunity. For those that were paying attention, congrats to you. The investing community is now giving Hollister the attention it rightfully deserves, and the company’s stock appears to be in the early stages of a major bull run. Investors would be wise to start their due diligence on Hollister as soon as possible. HOLL’s cheap share price won’t be around forever.

Shares of Hollister’s CSE listed HOLL stock closed trading today at $0.12 per share, up another 4.35% on the day. South of the border, the company’s U.S. OTC Markets listed HSTRF stock closed today’s trading session up 12.9% at $0.089 per share. Overseas in Germany, Hollister’s Frankfurt Stock Exchange-listed shares surged an impressive 27.5% to finish the day at $0.076. 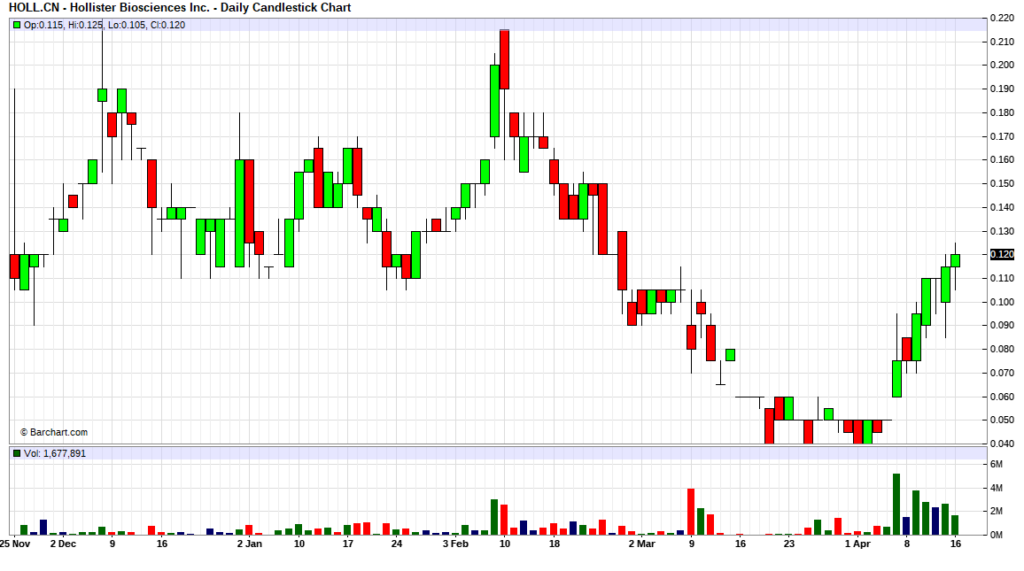