GATINEAU, Quebec, Dec. 13, 2018 (GLOBE NEWSWIRE) — HEXO Corp. (TSX:HEXO) (the “Company”) is reporting its financial results for the first quarter of the 2019 fiscal year. Gross revenue for the quarter reached $6.7 million, which includes $5.2 million in sales of adult-use cannabis in the first two weeks following legalization in Canada.

“HEXO hit tremendous milestones in the weeks following the legalization of adult-use cannabis,” said HEXO’s CEO and co-founder Sebastien St-Louis. “The Company continues to honour its commitment to executing on its plans, which has led to a significant portion of our first quarter’s $6.7 million in revenue generated in just two weeks and represents more than a 500% increase over last quarter.”

“HEXO’s first quarter financials highlight the remarkable pace of its adult-use cannabis sales and puts HEXO on-track to generate significant revenue this year”, added Mr. St-Louis. “Today, we are a world-class organization as our team continues to focus on our strategy which includes partnering with Fortune 500 companies in various product categories and leverage their distribution platforms.”

Other financial highlights include:

The management discussion and analysis for the period and the accompanying financial statements and notes are available under the Company’s profile on SEDAR at www.sedar.com and on its website at www.HEXO.com. All amounts are expressed in Canadian dollars.

Summary of results for the three-month period ended October 31, 2018 and October 31, 2017 (in thousands of Canadian dollars, except share and per share amounts, and where otherwise noted) 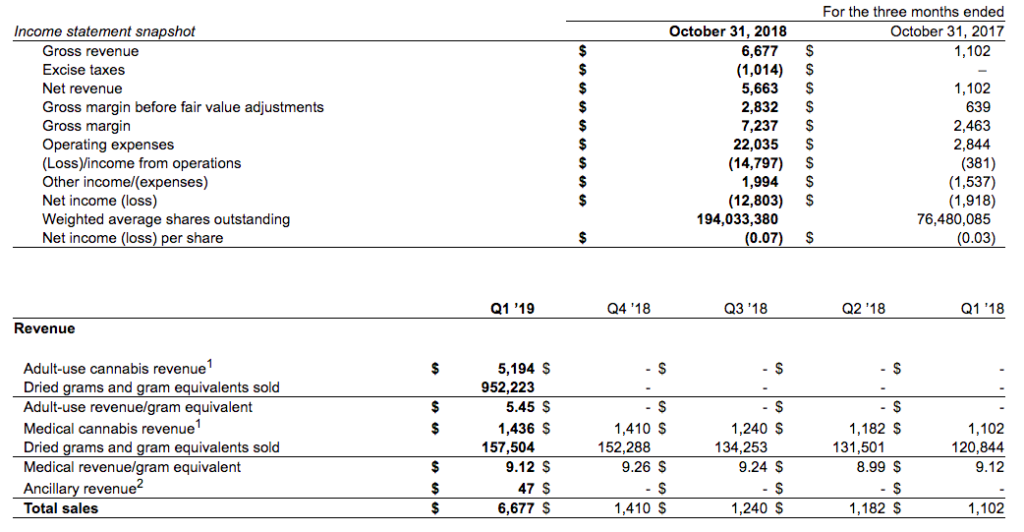 1 Cannabis revenue represents adult-use and medical market sales under the normal course of business and is exclusive of excise taxes.
2 Revenue outside of the primary operations of the Company.

Total revenue in the first quarter of fiscal 2019 increased to $6,677 from $1,102 in the compared period of fiscal 2018. The main contributor is the introduction of adult-use sales in the final two weeks of the quarter which accounted for 78% of total revenue. New in the period is $47 of ancillary non-direct cannabis sales revenue related to a management agreement.

The Company realized its first adult-use revenues during the first quarter of fiscal 2019. Adult-use sales totaled $5,194 in this period which is a 371% increase over the $1,102 of medical sales in the first quarter of 2018, and a 5% increase over the $4,934 of total medical sales in all of fiscal 2018. This is a direct result of the Company’s introductory brand awareness campaign.

During the period, 90% of all adult-use sales were realized in Quebec through the SQDC with the remaining 10% derived in Ontario and British Columbia via the OCS and BCLDB respectively.

Revenue for the first quarter ended October 31, 2018 increased 30% to $1,436 compared to $1,102 in the same period in fiscal 2018. Higher revenue was driven by increased sales volume as well higher Elixir oil sales which command a higher revenue per gram when compared to dried gram sales. Compared to the prior quarter, the sequential revenue increase was 2% reflecting a lower revenue per gram on the dried flower sales which decreased $0.22/gram due to the current period’s sales mix of products.

Geographical sales in Ontario and Quebec increased 8% and 16% respectively.

Cost of Sales and Excise Taxes

Fair value of biological assets represents the increase or decrease in fair value of plants during the growing process less expected cost to complete and selling costs and includes certain management estimates.

Fair value adjustment on the sale of inventory for the first quarter ended October 31, 2018 was $717 compared to $814 for the same quarter ended October 31, 2018. This variance is due to increased sales volume of inventory sold when compared to the same quarter in fiscal year 2018 and the reversal of the previously recognized net realizable impairment on dried inventory.

Fair value adjustment on biological assets for the quarter ended October 31, 2018 was ($5,123) compared to ($2,639) for the same quarter ended in fiscal 2018. This variance is due to the increase in the total number of plants as the first harvests and first full quarter of the B6 greenhouse being active. This results in significantly increased expected gram yields in the quarter and increased production costs of operating a newly in-use facility. The increase in scale and total plants on hand is the result of preparing for the adult-use market, which began October 17, 2018.

New in the period were excise taxes associated with the first adult-use and medical recognized revenues post legalization between October 17, 2018 and October 31, 2018. These taxes totaled $1,014 and reduced the total gross margin by approximately 13%. Excise taxes are a function of fixed provincial and territorial rates based upon the gram equivalents sold as well as a variable ad valorem component which is dependent upon the selling price of the products.

General and administrative expenses increased to $4,912 in the first quarter, compared to $1,168 for the same period in fiscal 2018. This increase reflects the general growing scale of our operations, including an increase in general, finance and administrative staffing and additional rental space. Total general and administrative payroll increased $2,063 due to the growth in operations. Total professional fees increased by $710, as a result of the increased financial reporting and control-based regulatory requirements accompanying public status on the TSX, additional legal fees pertaining to agreements such as the joint ventures established in the period, recruiting fees and increased compliance costs as a publicly listed company.

Marketing and promotion expenses significantly increased to $11,711 in the first quarter, compared to $1,115 for the same period in fiscal 2018. This reflects the launch of adult-use marketing and promotional events undertaken in the quarter as we build brand recognition and establish HEXO in the cannabis market. This is inclusive of higher staff and travel-related expenses, printing and promotional materials as well as advertisement costs.

AMORTIZATION OF PROPERTY, PLANT AND EQUIPMENT

Amortization of property, plant and equipment increased to $573 in the quarter, compared with $124 for the same period in fiscal 2018. The increase is the direct result of the Company’s newly built greenhouses and acquired cultivation equipment. Additionally, increases to cultivation and production equipment were incurred in order to support the larger production demands and scalability of the Company.

Amortization of intangible assets increased to $150 in the first quarter, compared with $63 for the same period in fiscal 2018. The increase is the result of the implementation of the first phase of a new ERP system, which will replace certain software programs we currently use and capitalized licenses and web based assets.

Income/(loss) from operations for the first quarter was ($14,797), compared to ($381) for the same period in fiscal 2018. The increased loss from operations is due mainly to higher expenses in line with the expanding scale of operations as we prepared for the legalization of the adult-use market and the realization of stock-based compensation expenses in line with the increased headcount and market share price value of the Company.

Other income/(expense) was $1,994 for the three months ended October 31, 2018 compared to ($1,537) in the same period of fiscal 2018. Revaluation of financial instruments of ($2,337) in the latest quarter reflects the revaluation of an embedded derivative related to USD denominated warrants issued in the prior year. Additionally, we had an unrealized fair value gain on convertible debenture receivable of $3,434. Interest income of $1,066 was realized for the three months ended October 31, 2018 reflective of the interest generated from the increased short-term investments held as at October 31, 2018.

HEXO Corp. creates and distributes innovative, easy-to-use and easy-to-understand products to serve the Canadian cannabis market. One of the country’s lowest-cost producers, HEXO is rapidly increasing its production capacity in the lead up to the adult-use cannabis market. The Company currently operates with over 310,000 sq. ft. of production capacity with construction on another 1,000,000 sq. ft. expansion set to be complete by year end. HEXO will serve the adult-use market under the HEXO brand, while continuing to serve its medical cannabis clients through the well-known Hydropothecary brand.

This press release may contain forward-looking information that is based on certain assumptions and involves known and unknown risks and uncertainties and other factors that could cause actual events to differ materially from current assumptions and expectations. These statements should not be read as guarantees of future performance or results. Such statements involve known and unknown risks, uncertainties and other factors that may cause actual results, performance or achievements to be materially different from those implied by such statements. A more complete discussion of the risks and uncertainties facing the Company appears in the Company’s Annual Information Form and continuous disclosure filings, which are available on SEDAR’s website at www.sedar.com. Readers are cautioned not to place undue reliance on these forward-looking statements, which speak only as of the date of this press release. The Company disclaims any intention or obligation, except to the extent required by law, to update or revise any forward-looking statements as a result of new information or future events, or for any other reason.