Have No Beer, Legal Weed is Here: Beer Sales Decline as Canadians Opt For Legal Cannabis - The Cannabis Investor

Have No Beer, Legal Weed is Here: Beer Sales Decline as Canadians Opt For Legal Cannabis

Is There a Correlation Between the Rise in Marijuana Sales and Weakening Beer Sales?

According to new data from Beer Canada, Canadians drank 3.9% less domestic beer in the first full year of legalized cannabis, as compared to 2018. Interestingly, last year’s sizeable drop in domestic brew came alongside a 1.4% increase in the consumption of imported beer brands. But overall, there’s been a sizeable slide in Canada’s beer consumption — the worst the country has seen in at least six years. So is this trend related to Canada’s newly legalized recreational cannabis market?

Some people seem to think so.

“This is far worse than the trends seen between 2014-2018, where beer industry volumes fell an average 0.3%,” said Vivien Azer, Managing Director and senior research analyst at COWEN, specializing in beverages, tobacco, and cannabis sectors.

Azer believes that cannabis-loving canucks prefer mainstream, imported beer brands over the country’s countless domestically brewed options, suggesting that cannabis users tend to opt for the best “buzz for your buck” when it comes to beer.

Meanwhile, Canada’s shrinking beer market — in the face of legalized cannabis — may be a sign of things to come south of the border. Beer volumes in the U.S. have declined for five consecutive years leading up to 2018, and while federal cannabis laws in the U.S. are far more complicated than in Canada, one can bet that the country’s Big Beer brands are on high alert.

Only the Beginning of the Cannabis Craze?

Canada’s beer brands better brace themselves — this could be just the beginning of cannabis encroaching on the country’s beloved barley and hops.

In December 2019, Canada began allowing cannabis-infused products — including beverages, extracts, vapes, topicals, and edibles — to be sold on shelves, with many more items expected to hit the market in the coming months. Azer, who favours cannabis over beer as an investment, notes that the launch of these new cannabis products will likely “perpetuate this trend” of declining beer consumption.

While there is still uncertainty regarding the connection between legalized cannabis use and reduced alcohol consumption, a recent U.S.-based survey produced by BDS Analytics suggests that more than half of people have paired alcohol with cannabis — and when paired, people tend to drink less. 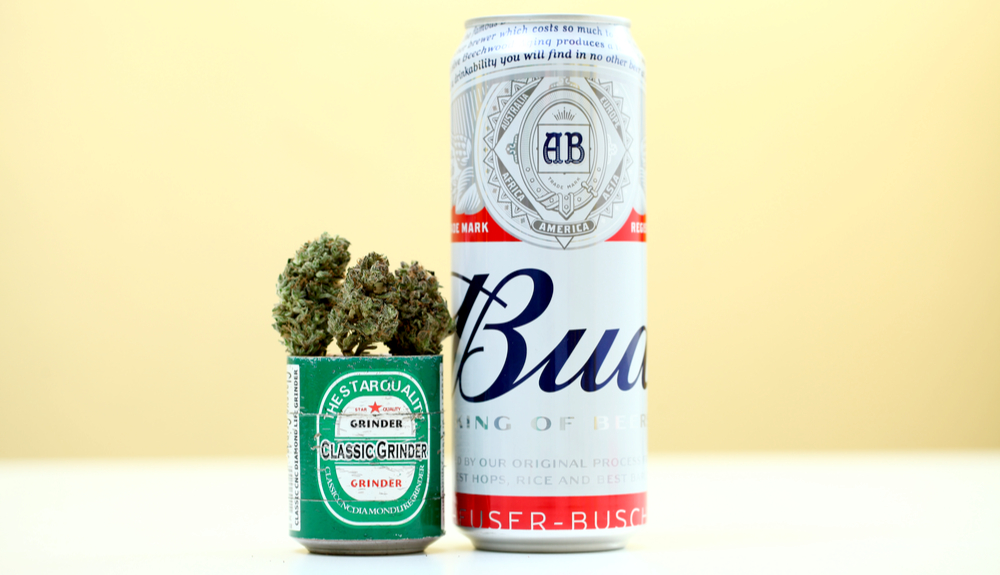 Alcohol-Cannabis Partnerships on the Rise

The recent decline in beer sales has led to several alcohol-cannabis partnerships, with a full line-up of cannabis-infused drinks ready to hit the Canadian market. This development — which some are referring to as ‘Cannabis 2.0’ — has many cannabis investors hopeful that the emerging beverage market will be a boon to underperforming pot stocks.

Here’s a look at some of the cannabis beverage products you can expect to see on shelves soon:

Canopy Growth (TSX: WEED) (NYSE: CGC) (FRA: 11L1) partnered with Corona maker and alcohol titan Constellation Brands (NYSE: STZ) (FRA: CB1A) to introduce a diverse selection of 13 cannabis-based beverages. The Canadian cannabis giant will be using a patented and proprietary process called Distilled Cannabis to produce the beverages. While details are scarce, we do know that Canopy’s new line of Distilled Cannabis beverages will come in a variety of THC and CBD infused options. It is anticipated that the company’s Distilled branded spirits will be available for purchase in Canada in early February 2020 with a retail price tag of $3.49 + tax. Canopy stated that its “cannabis beverages have the potential to introduce a whole different demographic to the cannabis category by presenting them with a familiar product format.”

Tilray (NASDAQ: TLRY) (FRA: 2HQ) teamed up with Budweiser maker and ‘King of Beers’ Anheuser-Busch InBev (EBR: ABI) (NYSE: BUD) (FRA: ITKA) with plans to produce a line of CBD-infused flavoured teas under their Fluent Beverage venture. Consumers should be on the lookout for Fluent’s new Everie brand to hit the market soon. Everie is a non-alcoholic “carefully crafted infusion – using CBD Isolate, a purified form of CBD – delivering 98% pure CBD, with less than 0.05mg of THC per serving.” The company’s lineup of flavoured teas will be distributed through Tilray’s High Park in partnership with Labatt Breweries. Labatt’s president Kyle Norrington stated that, in the next 5 years, the company’s alternative portfolio “Beyond Beer” could replace as much as 10% of its beer production.

Cannabis Still Small Compared to Beer, But the Potential is Massive

Despite all the buzz surrounding Canada’s ever-evolving cannabis market, marijuana consumption is still a drop in the bucket compared to Canada’s well-established beer and alcohol markets. Recent data from Beer Canada and Cowen puts annual cannabis sales at $1.5 billion, compared to beer’s $9.2 billion in sales and alcohol sales of $23 billion.

But if you’re anything like COWEN’s Vivien Azer, you know that despite the obstacles, the future of cannabis is brimming with opportunity.

“Cannabis is an emerging industry and is subject to regulatory headwinds,” said Azer. “Looking forward, much work and change still needs to occur in order for this industry to realize its full potential.”