“Delivering a solid first quarter is a great start to 2019.  We saw accelerated organic growth across both our consumer products and retail businesses, continued execution of our store build-out with four new openings year-to-date, and further expansion of our consumer products business with the closing of the AGL and Beboe transactions,” said GTI Founder and Chief Executive Officer Ben Kovler. “Integral Associates, Nevada’s top cannabis operator, is on track to close in the second quarter, which will significantly scale our branded products and retail footprint in the western U.S.”

“This performance led to the successful closing of our $105 million debt financing. GTI continues to be a first mover—this time in the capital markets. Importantly, this financing allows us to continue building a capital-efficient business that is well positioned for scalable, long-term sustainable growth,” Kovler continued. “We look forward to strong performance in 2019 as we see our investments in people, infrastructure, and branding gain momentum.”

Subsequent to the quarter, GTI closed a $105 million senior secured non-brokered private placement debt financing through the issuance of senior secured notes (the “Notes”). The financing will be used for general working capital purposes, strategic growth initiatives, and to retire the Company’s existing debt. The Notes have a maturity date of May 22, 2022 and will bear interest at 12% per annum, payable quarterly, with an option, at the discretion of the Company, to extend an additional 12 months.

In the first quarter, GTI generated revenue in nine markets: Nevada, Illinois, Pennsylvania, Massachusetts, Florida, Maryland, Connecticut, California, and Colorado. New revenue streams generated during the quarter included the sale of consumer products to third-party retail stores in Nevada, California, Colorado and Connecticut and the beginning of retail sales in Florida. The Company also made capital investments related to the build out of new markets in Florida, Nevada, and Ohio.

Total other income was $4.7 million for the first quarter as compared to $0.5 million for the same period last year. The increase primarily reflects the net increase in asset value of the Company’s strategic investment portfolio.

Additional information relating to the Company’s first quarter 2019 results is available on SEDAR at www.sedar.com in the Company’s Interim Financial Statements and Management Discussion & Analysis (“MD&A”).

GTI refers to certain non-IFRS financial measures such as Earnings Before Interest, Taxes, Depreciation and Amortization (EBITDA), adjusted EBITDA earnings defined as earnings before interest, other income, taxes, depreciation, amortization, less certain non-cash equity compensation expense, including one-time transaction fees and all other non-cash items, and adjusted operating EBITDA earnings defined as adjusted EBITDA excluding other income. These measures do not have any standardized meaning prescribed by IFRS and may not be comparable to similar measures presented by other issuers.

In January 2016, the IASB issued IFRS 16, Leases (“IFRS 16”), which replaced IAS 17, Leases. This standard introduces a single lessee accounting model and requires a lessee to recognize assets and liabilities for all leases with a term of more than twelve months unless the underlying asset is of low value. A lessee is required to recognize a right-of-use asset representing its right to use the underlying asset and a lease liability representing its obligation to make lease payments. The standard is effective for annual periods beginning on or after January 1, 2019.

The Company has applied this standard on a modified retrospective basis, where the cumulative effect of initially applying the standard is recognized as an adjustment to the opening balance of retained earnings and comparative balances are not restated.

GTI will host a conference call on Thursday, May 30, 2019 at 5:00 pm ET to discuss its financial results for the first quarter ended March 31, 2019. The conference call may be accessed by dialing 877-273-8145 (Toll-Free) or 647-689-5400 (International) with conference ID: 9458208. A live audio webcast of the call will also be available on the Investor Relations section of GTI’s website at https://investors.gtigrows.com/investors and will be archived for replay.

Green Thumb Industries (GTI), a national cannabis consumer packaged goods company and retailer, is dedicated to providing dignified access to cannabis while giving back to the communities in which they serve. GTI manufactures and distributes a portfolio of branded cannabis products including Rythm, Dogwalkers, The Feel Collection, and Beboe, among others. The company also owns and operates a rapidly growing national chain of retail cannabis stores called Rise™. Headquartered in Chicago, Illinois, GTI has 11 manufacturing facilities, licenses for 78 retail locations and operations across 12 U.S. markets. Established in 2014, GTI employs approximately 800 people and serves thousands of patients and customers each year. GTI was named a Best Workplace 2018 by Crain’s Chicago Business.  More information is available at GTIgrows.com.

This press release contains statements which may constitute “forward-looking information” within the meaning of applicable securities laws, including statements regarding the plans, intentions, beliefs and current expectations of GTI with respect to future business activities. Forward-looking information is often identified by the words “may,” “would,” “could,” “should,” “will,” “intend,” “plan,” “anticipate,” “believe,” “estimate,” “expect,” or similar expressions and include information regarding the future direction and business objectives of GTI (including proposed acquisitions and plans for expansion)  The forward‐looking information in this news release is based upon the expectations, estimates, projections, assumptions and views of future events which management believes to be reasonable in the circumstances, including those relating to the ability of GTI to complete the acquisition of Integral Associates on the current terms and the timing of such acquisition, and expectations relating to general economic and market conditions. Any forward‐looking information speaks only as of the date on which it is made, and, except as required by law, GTI does not undertake any obligation to update or revise any forward‐looking information, whether as a result of new information, future events or otherwise. The forward‐looking information in this news release is subject to a variety of known and unknown risks, uncertainties and other factors that could cause actual events or results to differ from those express or implied. When considering these forward‐looking statements, readers should keep in mind the risk factors and other cautionary statements in GTI’s public filings with the applicable securities regulatory authorities on SEDAR at www.sedar.com, including the risk factors set out in GTI’s annual information form dated July 10, 2018.

The Canadian Securities Exchange does not accept responsibility for the adequacy or accuracy of this release. 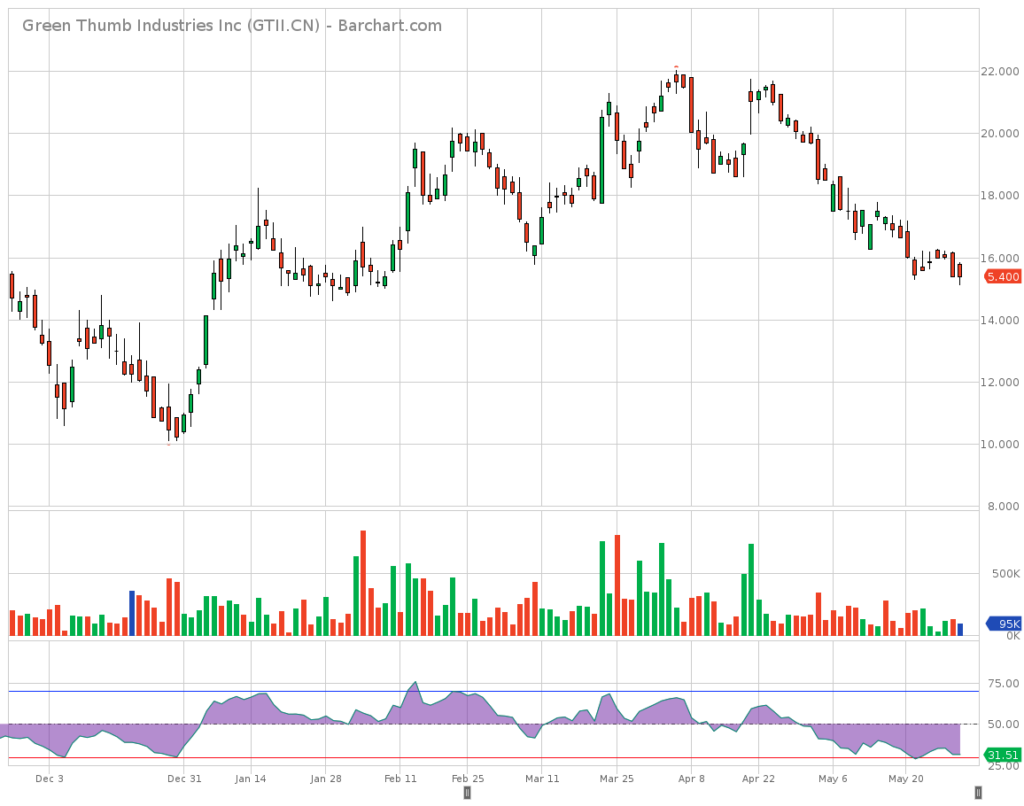 Technical Analysis for GTII by TradingView