FDA and Psychedelics: What it Has, What it Wants - The Cannabis Investor

FDA and Psychedelics: What it Has, What it Wants

How to work with and do clinical testing on cannabis, for example, which is now legalized in 33 states and the District of Columbia but is still listed by the Drug Enforcement Administration (DEA) as having no medical value whatsoever, and one of the worst drugs on the planet, has put the U.S. Food and Drug Administration (FDA) in a tough spot. Is it good? Is it bad? Can we allow research on a DEA Schedule 1 drug that seems to help so many people— and is already legal in so many states?

Evidence (mostly anecdotal) of human pain relief because of cannabis and compounds derived from cannabis, backs up claims that marijuana should be legalized as an approved medicine by the FDA, and prescribed by doctors.

In June 2018, the FDA approved Epidiolex made by GW Pharmaceuticals (NASDAQ: GWPH) (FRA: GW2A), the first drug to be approved by the FDA made with cannabidiol, an ingredient derived from cannabis used to treat a rare form of epilepsy. Epidiolex was the first non-synthetic, non-THC, plant-derived, lab purified cannabidiol drug approved by the FDA. The FDA’s approval of Epidiolex also directly contradicts the DEA’s stance that cannabis is a Schedule 1 drug.

A synthetic THC drug, Marinol (Dronabinol), created by Unimed Pharmaceuticals, was approved by the FDA in 1985. It was originally listed as a DEA Schedule II drug until Unimed petitioned the DEA to have it relisted as Schedule III, allowing doctors to prescribe it. Until the end of 2019, Marinol was manufactured by Thermo Fisher (NYSE: TMO) owned Patheon Softgels for pharmaceutical giant AbbVie (NYSE: ABBV). On December 31, 2019, Alkem Laboratories (NSE: ALKEM) acquired Marinol from AbbVie for $10 million. Dronabinol prices have dropped off significantly in recent years due to increased competition from generic makers such as Akorn (NASDAQ: AKRX) and Lannett (NYSE: LCI).

But there’s more to consider. FDA insiders say that, even if cannabis were approved for FDA testing, qualified labs would have to test it one cannabinoid at a time. And there are reportedly 100-plus cannabinoids in the plant, with the likelihood of more to be discovered as researchers continue their work. 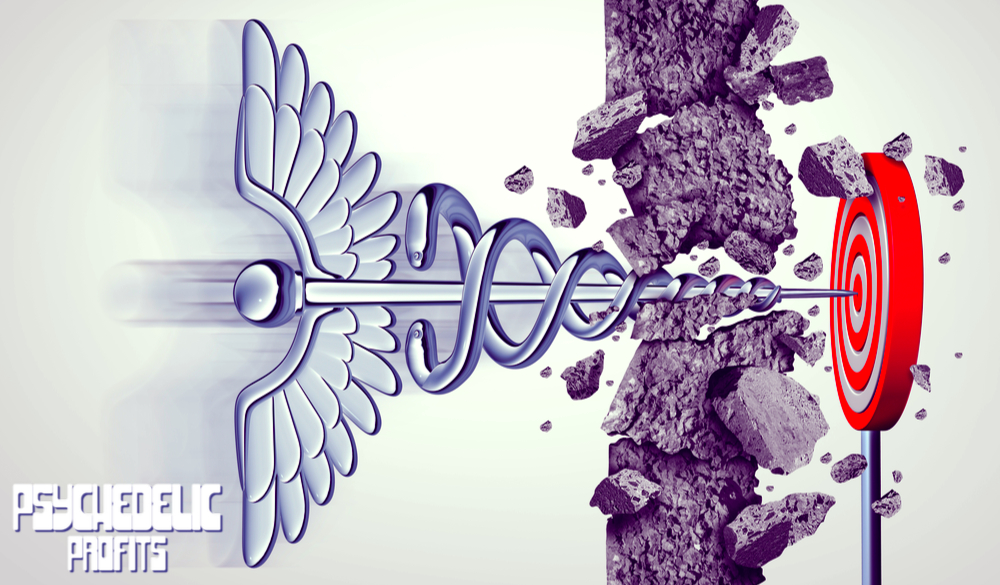 Now psychedelics are having their day with the FDA, following the same path in some ways that cannabis followed in terms of anecdotal studies. The FDA has been getting more involved in approving various psychedelics for patient use and applying both breakthrough therapy designation and fast track process to psychedelics.

One of the first examples of this new initiative by the FDA was when they granted breakthrough designation for MDMA-assisted psychotherapy for the treatment of PTSD in August 2017, which is in clinical studies now with FDA approval expected in 2022.

Breakthrough therapy designation is relatively new, created by the FDA on July 9, 2012, in Section 902 Food and Drug Administration Safety and Innovation Act (FDASIA). A breakthrough therapy is a drug that, either alone or in combination with one or more other drugs, is used to treat a serious or life-threatening disease or condition, with preliminary clinical evidence indicating that the drug may demonstrate “substantial improvement over existing therapies on one or more clinically significant endpoints, such as substantial treatment effects observed early in clinical development.”

Breakthrough designations (and fast track process criteria) by the FDA are guided by how the FDA interprets the term “serious” in a disease or condition, listing the following: “Whether a disease or condition is serious is a matter of clinical judgment, based on its impact on such factors as survival, day-to-day functioning, or the likelihood that the disease if left untreated, will progress from a less severe condition to a more serious one.”

The FDA requires a lot of documentation for submissions for breakthrough therapy designation. Researchers submitting applications should have preliminary clinical evidence that the drug may demonstrate substantial improvement over available therapies; include a description of the preliminary clinical evidence, such as, for example, a brief description of available therapies (if there are any); information about the study design, and the population studied; and a brief description of the study results and statistical analyses.

The FDA expects that these applications will require at least 20 pages of details.

If the FDA gatekeepers like what they see in the application, they will respond within 60 days that breakthrough therapy designation is granted for the development of the product for use in treating the specific serious condition. The FDA will work closely with the sponsor to provide guidance on subsequent development, including providing advice on generating evidence needed to support the drug approval in an efficient manner; and alert the sponsor to the need for the drug development program to continue to meet the criteria for breakthrough therapy designation.

When it comes to managing the clinical trial design and approval process for psychedelics, with breakthrough therapy already happening and businesses realizing that’s how you get a drug from lab to patient faster, the FDA is trying to figure out the right approach, and is looking for help.

In a presentation at the Psychedelic Opportunity Summit in June, speakers Katherine Bonson, a senior pharmacologist at the Center for Drug Evaluation and Research (CDER) and the FDA, along with Dr. Javier Muniz, the associate director for the Office of Neuroscience at CDER/FDA, discussed issues related to the poor quality studies of LSD and the path to FDA approval going forward.

Funding for psychedelics studies had dried up in the 1970s and 1980s. Past and current psychedelic studies are often more like case reports or small-scale pilot studies, Bonson pointed out.

What the FDA wants is more “modern-day” approach that complies with regulations for “adequate and well-controlled studies.”

They suggest that researchers apply for a Schedule I license after first submitting a clinical study to the FDA that includes the merits of the research. The DEA makes the final decision on whether to issue that license.

Muniz brought up the unique challenges that psychedelics have in clinical tests. “People describe their experiences as one of the five most important experiences in their lives,” he said. “I knew that experiences such as these were abundant, but I remember thinking to my regulatory self, how in the world are we going to be able to work with that?”

Subjects would know whether they were taking placebos or not due to the profound experiences those who actually took the psychedelics were experiencing.

“The reality is that we don’t know what the correct approach to doing these clinical trials for psychedelics are yet,” Muniz said. “We have approaches that may have their own strengths or weaknesses. But none of these approaches have been formalized. The bottom line is that we must take that totality of the research that has already been done showing that the drug works.”

He closed his presentation asking for help from those who have already conducted research to further guide what the CDER and FDA need to do.

These clinical challenges were precisely what author Michael Pollan noted in his book How to Change Your Mind. “How do you do a controlled experiment with a psychedelic? How do you effectively blind your patients and clinicians or control for the powerful expectancy effect? When ‘set’ and ‘setting’ play such a big role in the patient’s experience, how can you hope to isolate a single variable or design a therapeutic application?”

“There are many challenges in testing psychedelics in psychiatric patients, especially in the context of the placebo effects,” Bonson said. “But in the end, these studies need to be designed so we can determine that the psychedelic products have a safe and effective therapeutic response that will allow us to approve the drug for marketing.”