Dana White: Lookin' for a New Type of Fight and it Involves Psychedelics for Fighter Brain Injuries - The Cannabis Investor

Dana White: Lookin’ for a New Type of Fight and it Involves Psychedelics for Fighter Brain Injuries

The UFC, Which Has Long Been at the Forefront of Cutting Edge Sports Science and Research, is Again Pushing the Boundaries Looking to Be the First Major Pro Sports League to Enter the World of Psychedelic Medicine

At the Request of President Dana White, the UFC Has Reached Out to Global Psychedelic Research Leader Johns Hopkins University to Take a Closer Look at Psychedelics and How They Might Help Combat the Effects of CTE and Other Traumatic Brain Injuries

The Ultimate Fighting Championship (UFC) has garnered a reputation for being one of the boldest pro sports leagues in North American by consistently being the first to challenge difficult obstacles or enter new frontiers.

For example, during the early days of the pandemic, when the MLB, NHL and NBA were all frozen in fear, waiting for each other to make the first move, the UFC, led by its fearless president, Dana White, took the bull by the horns and created the blueprint that would see pro sports return to TV.

In keeping up with its streak of firsts, the UFC has taken the first steps to explore psychedelic medicine as a potential therapy for fighters dealing with brain injuries and mental health issues, such as CTE, PTSD and addiction.

At the directive of President Dana White, the world’s leading MMA promotion has reached out to Johns Hopkins University, the global leader in psychedelic research, to help the UFC determine if psychedelics like Psilocybin (Magic Mushrooms) and LSD could help treat fighter brain issues.

When asked by media outlet MMA Junkie if the UFC was, in fact, looking into psychedelics, White responded by saying: “we’re diving into that.”

“Dana said, ‘Hey, find out what this is about. To see if it does help with some traumatic brain injury, addiction, mental health problems. We want to be on board, and we want to be first,” described Jeff Novitzky, Sr. VP of Health and Performance at the UFC.

According to ESPN, Novitzky said the UFC’s interest in psychedelic medicine stemmed from a recent episode of the HBO show “Real Sports,” which featured former MMA fighters discussing their personal experiences with psychedelics therapy.

According to Novitzky, after viewing the HBO Real Sports segment last month, Dana White issued him a directive to take a deeper look into psychedelic research, which ultimately led to Novitzky reaching out to Johns Hopkins.

“But Dana has basically instructed me: ‘Hey, I want this looked into. Bring me some potential avenues we can be involved,'” added Novitzky. 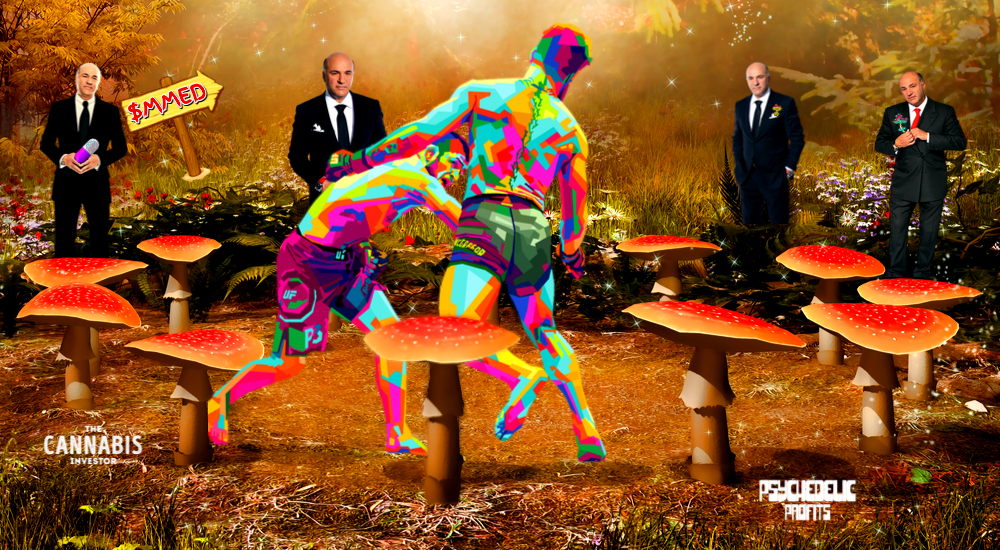 The Johns Hopkins Center for Psychedelic and Consciousness Research is the first research center of its kind. It has allowed researchers the unique ability to study up close the effect psychedelics have on behaviour, mood, cognition, brain function, and biological markers of health.

Upcoming studies at the Johns Hopkins Psychedelic Center will be focused on determining the effectiveness of psilocybin as a new therapy for opioid addiction, PTSD, alcohol use in people with major depression, Alzheimer’s, post-treatment Lyme disease syndrome and anorexia nervosa. The center’s researchers hope to one day create precision psychedelic medicines that are tailored to the specific needs of individual patients.

Since the Psychedelic research center’s launch, it has published groundbreaking studies in over 60 peer-reviewed articles in respected scientific journals.

“Johns Hopkins is deeply committed to exploring innovative treatments for our patients. Our scientists have shown that psychedelics have real potential as medicine, and this new center will help us explore that potential,” wrote Paul B. Rothman, Dean of Johns Hopkins University School of Medicine and CEO of Johns Hopkins Medicine.

Should the UFC get involved with Johns Hopkins, expect the cash cow organization to contribute substantial capital to the psychedelic research center’s efforts. According to Novitzky, the top MMA promotion would possibly look to recruit active fighters from its rosters and retried MMA fighters to take part in the study.

One thing is for sure, when the UFC gets behind something, it doesn’t half-ass it. It goes all-in. So, if a research partnership between the UFC and Johns Hopkins materializes, it will be a massive win for the entire psychedelics industry.

Stay tuned for more details on this developing story.

Trending: World’s First Psychedelics ETF is on the Horizon, Here Are 4 Psychedelic Stocks Certain to Be in the ETF’s Portfolio