“We are proud of all we have accomplished in 2018 and in the fourth quarter. Over the past year, Cronos Group has diligently focused on our strategic objectives, which culminated in our transformative partnership with Altria Group, Inc.,” said Mike Gorenstein, CEO of Cronos Group. “We’ve expanded our production footprint domestically and internationally, developed our distribution with global partnerships, launched iconic brands for the Canadian adult-use market and grown our IP portfolio with landmark research and development initiatives.”

“At Cronos Group, we take pride in leading the industry forward responsibly and are motivated to create meaningful products that excite our consumers and bring happiness and an improved quality of life. We are very excited to partner with Altria to help us realize our goals. Altria’s investment and the services they provide will enhance our resources and enable us to scale our product development and commercialization capabilities. The growth potential in the cannabis industry is vast and we are only just beginning. With our differentiated brands, global footprint, growing production capacity and commitment to cannabinoid innovation, together with Altria’s partnership, Cronos Group is well positioned to realize this opportunity. We’re heading into 2019 energized and ready to execute on our strategy.”

Cronos Group became the first pure-play cannabis company to list on a major stock exchange in the United States. The Company’s common shares began trading on the NASDAQ Global Market (“NASDAQ”) under the trading symbol “CRON” in February 2018. Another milestone came in May 2018, as the trading of Cronos Group’s common shares in Canada was up-listed from the TSX Venture Exchange to the Toronto Stock Exchange (“TSX”). In May 2018, the Cronos Group board of directors (the “Cronos Group Board”) approved the appointment of KPMG LLP as independent auditor of the Company. These major corporate milestones reflect the significant progress Cronos Group has made in strengthening our corporate governance structure.

In March 2019, the Company closed the $2.4 billion equity investment in the Company previously announced in December 2018 (the “Altria Investment”) by Altria Group, Inc. (“Altria”), pursuant to a subscription agreement dated December 7, 2018. At closing, Altria also received a warrant to acquire additional common shares of the Company (the “Warrant”) that if fully exercised at closing, would provide the Company with approximately $1.4 billion of additional proceeds.

As of the closing date of the Altria Investment, Altria held an approximately 45% ownership interest in the Company (calculated on a non-diluted basis) and, if exercised in full on such date, the exercise of the Warrant, would result in Altria holding a total ownership interest in the Company of approximately 55% (calculated on a non-diluted basis). This strategic partnership with Altria provides Cronos Group with additional financial resources, product development and commercialization capabilities, and deep regulatory expertise to better position the Company to compete in the global cannabis industry.

Along with new appointees to the Cronos Group Board, Cronos Group bolstered its management team with the addition of Jerry Barbato, who has been appointed Chief Financial Officer (“CFO”) of the Company, effective April 15, 2019. Mr. Barbato most recently was the Senior Director of Corporate Strategy at Altria and will assume the CFO role from William Hilson, who will transition to a new role as Cronos Group’s Chief Commercial Officer, also effective April 15, 2019. As Chief Commercial Officer, Mr. Hilson will report to Mike Gorenstein and be responsible for further enhancing the commercial strategy as well as the product and research development priorities of the Company.

Cronos Group is committed to building a global network, with partnerships, joint ventures, production and distribution across international and domestic markets. In the Canadian market, the Company’s wholly-owned licensed producer and center of excellence, Peace Naturals Project Inc. (“Peace Naturals”), yielded its first harvest in December 2018 in the newly completed Building 4 (“B4”) at the Peace Naturals campus. B4 is Cronos Group’s 286,000 sq. ft. purpose-built indoor production facility, which was built to Good Manufacturing Practice (“GMP”) standards. In 2018, the Company not only constructed B4 but also completed construction of the Peace Naturals greenhouse. Peace Naturals engages in the cultivation, production, and research and development of cannabis, cannabinoids and cannabis-based products.

Cronos Group’s joint venture, Cronos Israel, with the Israeli agricultural collective settlement Kibbutz Gan Shmuel (“Gan Shmuel”) for the production, manufacture and distribution of medical cannabis, is currently under construction. The Company anticipates that construction of the 45,000 sq. ft. greenhouse will be complete in the first half of 2019 and construction of the manufacturing facility will be complete in the second half of 2019.

This partnership establishes a newly formed entity, NatuEra S.à r.l. (“NatuEra”), in Colombia that will develop, cultivate, manufacture and export cannabis-based medical and consumer products for the Latin American and global markets. NatuEra is the cannabis industry’s first Contract Manufacturing Organization (CMO) in Latin America, with plans to allow the growing number of cannabis brands to outsource cultivation and manufacturing. NatuEra plans to develop its initial cultivation and manufacturing operations with a purpose-built, GMP-standard facility located in Cundinamarca, Colombia.

NatuEra was granted a license to cultivate non-psychoactive cannabis plants to produce seeds for planting and the manufacture of derivative products. Commencement of operations at the facility will be subject to obtaining the remaining appropriate licenses under applicable law.

On October 17, 2018, Canada became the first G7 country and the second country in the world to legalize cannabis sales for adult use. Cronos Group participated in this new market through the launch of its two adult-use brands COVE™ and Spinach™. Currently, these brands are distributed to the following provinces: Ontario, British Columbia, Nova Scotia, Prince Edward Island and Saskatchewan. As Cronos Group’s production capacity grows, the Company intends to explore expanding its distribution into additional Canadian provinces and territories by entering into agreements with the appropriate parties.

Additionally, for the Canadian market, Cronos GrowCo entered into a supply agreement with Cura Cannabis Solutions (“Cura”) in August 2018. Cura signed a five year take-or-pay supply agreement to purchase a minimum of 20,000 kilograms of cannabis per annum from Cronos GrowCo after Cura receives all necessary licenses from Health Canada.

In September 2018, Cronos Group and Ginkgo announced a landmark partnership to produce cultured cannabinoids through fermentation that are identical to those extracted from the cannabis plant. The research and development partnership is focused on producing large volumes of eight target cannabinoids, including rare cannabinoids, from custom yeast strains by leveraging existing fermentation infrastructure without incurring significant capital expenditures to build new cultivation and extraction facilities.

The Company will fund certain research and development and foundry expenses expected to be approximately US$22.0 million, subject to the achievement of certain milestones. In addition, tranches of Cronos Group’s common shares will be issued to Ginkgo, upon Ginkgo’s demonstration that the microorganisms are able to produce the target cannabinoids for less than US$1,000 per kilogram of pure cannabinoid at a scale of greater than 200 liters.

In November 2018, Ginkgo received from the U.S. Drug Enforcement Agency (the “DEA”) a DEA Researcher Controlled Substance Registration Certificate and a Researcher Controlled Substance Registration Certificate from the Massachusetts Department of Public Health for the conduct of research involving cannabinoids. The Company intends to produce and distribute the target cannabinoids globally and has received confirmation from Health Canada that this method of production is permitted under the Cannabis Act.

In October 2018, Cronos Group announced that the Company had entered into a sponsored research agreement with Technion to explore the use of cannabinoids and their role in regulating skin health and skin disorders. The preclinical studies will be conducted by Technion over a three-year period and will focus on three skin conditions: acne, psoriasis and skin repair. Research will be led by Technion faculty members Dr. David “Dedi” Meiri, Head, Laboratory of Cancer Biology and Cannabinoid Research, and Dr. Yaron Fuchs, Head, Laboratory of Stem Cell Biology and Regenerative Medicine, two of the world’s leading researchers in cannabis and skin stem cell research, respectively.

Cronos Group is building an iconic brand portfolio designed to meet the needs and exceed the expectations of our consumers. In May 2018, Cronos Group previewed its premium recreational brand COVE™. COVE™ was born in the Okanagan Valley in British Columbia, which is known for producing some of the world’s finest cannabis. COVE™ products are terpene-rich and hand-trimmed using only the best results from each harvest. By avoiding shortcuts like harsh refining processes, COVE™ maintains the natural balance of the plant across all the brand’s terpene-rich cannabis extracts and brings the highest quality products to its consumers.

In September 2018, Cronos Group launched its other adult-use brand, Spinach™. This mainstream adult-use brand is fun, lighthearted and playful. Spinach™ is focused on offering Farm-To-Bowl™ products that bring friends together and make experiences more enjoyable. This brand has High Expectations™ and is geared towards a wide range of consumers that don’t take life too seriously and are looking for entertaining, fun ways to enhance activities.

In 2018, Cronos Group strengthened liquidity by raising $100.0 million and $46.0 million of gross proceeds through two separate bought deal offerings of common shares in April 2018 and January 2018, respectively. In March 2019, the Company’s liquidity position was further strengthened by the closing of the Altria Investment.

In March 2019, the Company sold all of its approximately 19% equity interest in Whistler Medical Marijuana Corporation (“Whistler”) to Aurora Cannabis Inc. (“Aurora”) in an all-share transaction (the “Aurora Acquisition”). At closing of the Aurora Acquisition, the Company received approximately $24.7 million in value of Aurora common shares. Subject to the satisfaction of certain specified milestones, the Company expects to receive an additional $7.6 million in value of Aurora common shares.

The Company will host a conference call and live audio webcast on Tuesday, March 26, 2019 at 8:30 a.m. EST to discuss fourth quarter 2018 and fiscal year 2018 results. The call will last approximately one hour. Instructions for the conference call are provided below:

An audio replay of the call will be archived on the Company’s website for replay.

All references in this news release to “dollars”, “C$” or “$” are to Canadian dollars and all references to “US$” are to United States dollars. 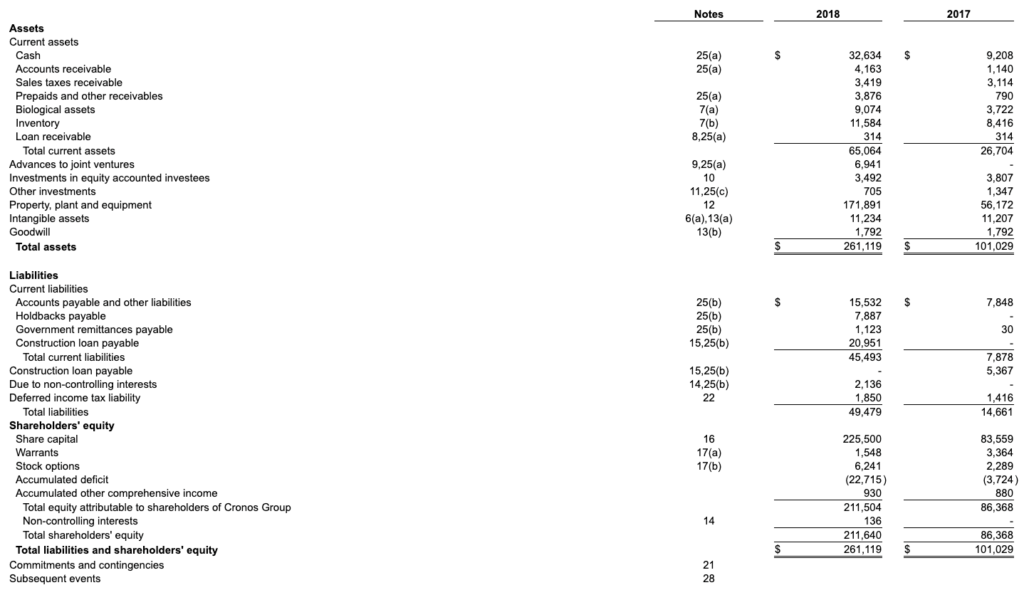 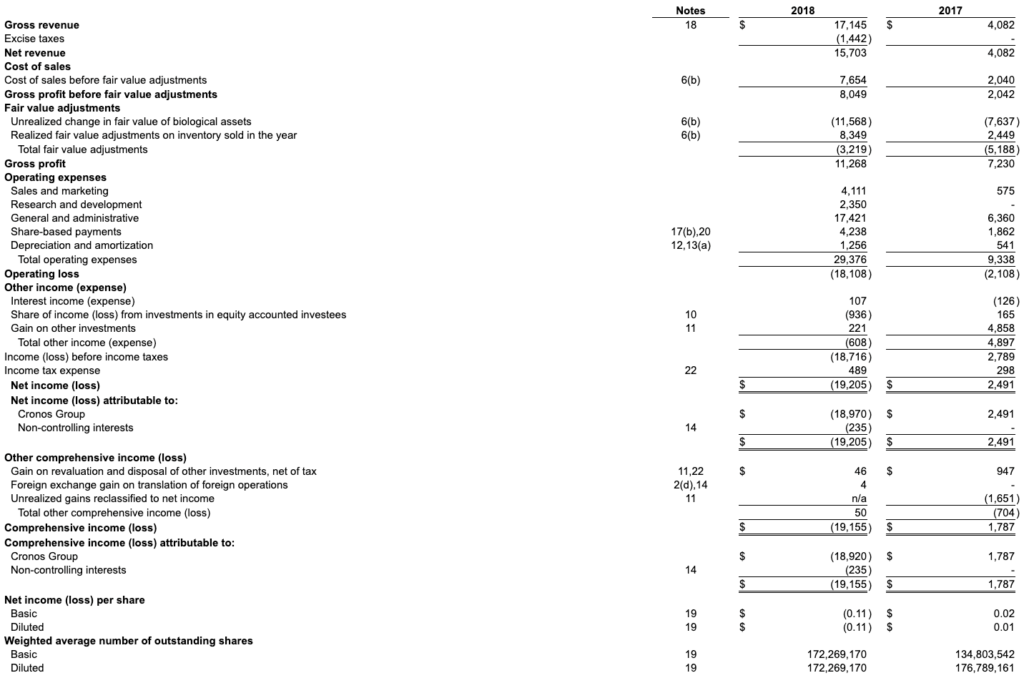 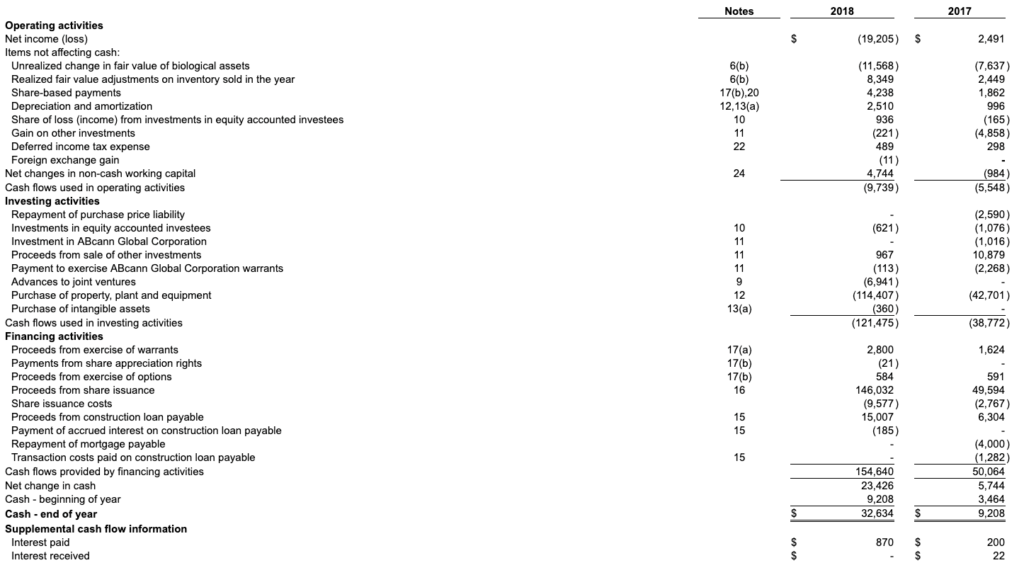 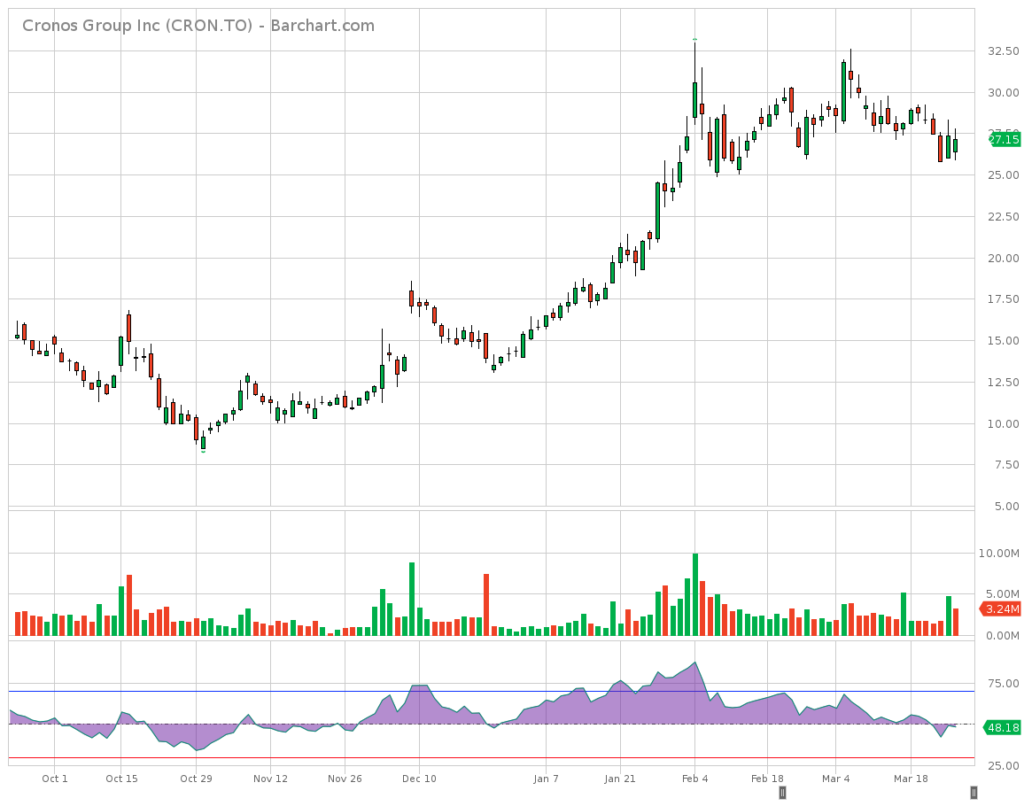 Create your own CRON technical and interactive chart – Barchart

Technical Analysis for CRON by TradingView