SMITHS FALLS, ON and NEW YORK, April 18, 2019 /PRNewswire/ – Canopy Growth Corporation (“Canopy Growth“) (TSX: WEED) (NYSE: CGC) and Acreage Holdings, Inc. (“Acreage“) (CSE: ACGR.U) (OTCQX: ACRGF) (FSE: 0ZV) (together, the “Companies“) are pleased to announce that they have entered into a definitive arrangement agreement that grants Canopy Growth the right to acquire 100 percent of the shares of Acreage (the “Right“), with a requirement to do so at such time as cannabis production and sale becomes federally legal in the United States (the “Transaction“), subject to obtaining the requisite prior approval of the shareholders of each of Acreage and Canopy Growth, respectively (the “Shareholder Approval“), as well as the approval of the Supreme Court of British Columbia (the “Court Approval“).

The Companies will also execute a licensing agreement granting Acreage access to Canopy Growth’s award-winning line-up of brands such as Tweed and Tokyo Smoke, along with other intellectual property. Once the Right is exercised, Acreage will become part of a leading global cannabis company with access to markets beyond the U.S. Until then, the two companies will continue to operate independently.

“Today we announce a complex transaction with a simple objective. Our right to acquire Acreage secures our entrance strategy into the United States as soon as a federally-permissible pathway exists,” said Bruce Linton, Chairman and co-CEO, Canopy Growth. “By combining Acreage’s management team, licenses and assets with Canopy Growth’s intellectual property and brands, there will be tremendous value creation for both companies’ shareholders.”

“From the first day we created our company, providing exceptional customer care and delivering shareholder value have been our top priorities. This transaction will help accomplish both,” said Acreage Holdings Chairman, CEO and President Kevin Murphy. “When the right is exercised having access to Canopy Growth’s deep resources will enable us to innovate, develop and distribute quality cannabis brands across the U.S. and continue expanding our U.S. footprint. At the same time, a confluence of factors are making it much more difficult for a multi-state operator to achieve its full potential, including the enormous amount of cash required to scale. Our Board of Directors, management team and I are pleased to deliver significantly increased liquidity to our shareholders and put ourselves in an even stronger position to deliver continued and significant upside.”

Once the Right is exercised, the combined infrastructure, intellectual property, brands and organizational resources are expected to create a global cannabis powerhouse, with an anticipated leadership position in every targeted international market for legal cannabis sales, including the U.S., Canada, and select markets across Latin America, Europe and Asia-Pacific.

The Transaction will be carried out by way of a court-approved plan of arrangement under the Business Corporations Act (British Columbia) (the “Arrangement“) and will require the approval of shareholders of both Canopy Growth and Acreage at special meetings expected to take place in June 2019. In addition to shareholder approval, the Transaction is subject to applicable regulatory, court and stock exchange approvals and certain other closing conditions.

Completion of the Transaction is conditional on the approval by holders of Canopy Shares of the issuance of the Canopy Shares pursuant to the Transaction and certain amendments to the existing warrants held by a subsidiary of Constellation Brands. Due to the scope of the proposed transaction, Canopy Growth and Constellation Brands have amended the investor rights agreement as outlined here:

With these Amendments, Constellation continues using its cash flow to generate a return for its shareholders while Canopy Growth continues to deploy the USD $4 billion investment made by Constellation in November 2018.

The Acreage Board and the special committee have obtained a fairness opinion from each of Canaccord Genuity Corp. and INFOR Financial Inc. that, as of the date of the respective opinions, and subject to the assumptions, limitations, and qualifications on which such opinions are based, the consideration to be received by Acreage Holders pursuant to the Transaction is fair, from a financial point of view to the Acreage Holders.

The issuance of the Canopy Shares in connection with the Transaction and certain of the amendments will require the approval of a simple majority of the disinterested shareholders of Canopy Growth present at a special meeting (the “Canopy Meeting“).

The Transaction is subject to, among other things, approval from the CSE, the Toronto Stock Exchange, and the New York Stock Exchange, the Supreme Court of British Columbia and certain other regulatory approvals and closing conditions. The Agreement contains representations, warranties and covenants, including a termination fee in the amount of US$150 million payable by Acreage in the event that the Transaction is terminated in certain circumstances. The Agreement also includes certain non-solicitation covenants subject to the right of Acreage to accept a superior proposal in certain circumstances, with Canopy Growth having a five-business-day right to match any such superior proposal received by Acreage.

About Canopy GrowthCanopy Growth is a world-leading diversified cannabis and hemp company, offering distinct brands and curated cannabis varieties in dried, oil and Softgel capsule forms. Canopy Growth offers medically approved vaporizers through its subsidiary, Storz & Bickel GMbH & Co. KG. From product and process innovation to market execution, Canopy Growth is driven by a passion for leadership and a commitment to building a world-class cannabis company one product, site and country at a time. Canopy Growth has operations in over a dozen countries across five continents.

About AcreageHeadquartered in New York City, Acreage is the largest vertically integrated, multi-state owner of cannabis licenses and assets in the U.S. with respect to the number of states with cannabis-related licenses, according to publicly available information. Acreage owns licenses to operate or has management services agreements in place with license holders to assist in operations in 20 states (including pending acquisitions) with a population of approximately 180 million Americans, and an estimated 2022 total addressable market of more than $17 billion in legal cannabis sales, according to Arcview Market Research. Acreage is dedicated to building and scaling operations to create a seamless, consumer-focused branded cannabis experience. Acreage’s national retail store brand, The Botanist, debuted in 2018. 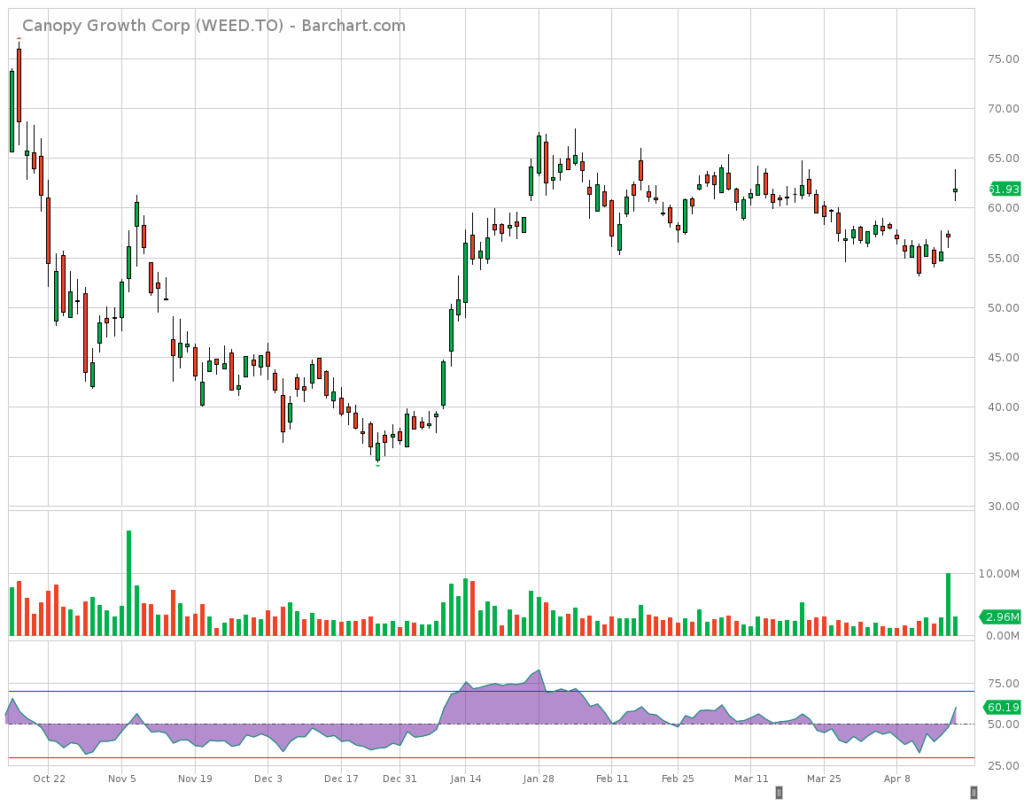 Create your own WEED technical and interactive chart – Barchart

Technical Analysis for WEED by TradingView