Canopy Growth (TSX: WEED) (NYSE: CGC) reported fiscal Q1 earnings yesterday aftermarket, and the results caused shares of cannabis stocks across the board to plunge. The majority of noteworthy marijuana stocks dropped anywhere from 5% – 15% as the market fully digested the dismal financials.

Canopy reported a net loss of approximately $1.3 billion for the first quarter of fiscal 2020. On a per-share basis, the company’s large loss worked out to $3.70. The substantial increase in Canopy’s net loss has struck fear into the market, and rightfully so. In fiscal Q1 of 2019, the company lost roughly $91 million or $0.40 per share.

The company blamed the acceleration of its losses on its non-cash loss of $1.18 million caused by the extinguishment of warrants held by Constellation Brands (NYSE: STZ). Not sure how much merit that claim has considering the $1.18 million non-cash loss made up only a small fraction of the over $1 billion quarterly loss. Constellation shook the cannabis market in November of last year when the alcohol giant made a surprise $5 billion investment into Canopy. The market is still searching for 2019’s version of that catalyst.

It wasn’t all doom and gloom for the cannabis industry’s market cap leader. Canopy was able to offset some of its absurd losses by posting net revenue of $90.5 million for the quarter. Revenue in the company’s previous year’s first quarter was $25.9 million representing strong year-over-year revenue growth of 249.42%. Adjusted EBITDA came in at negative $92 million, which was a slight increase of about $6 million compared to the previous quarter.

The company also saw it’s operating expenses jump 215% to $229 million. Gross margins dropped substantially quarter-over-quarter in direct response to the company’s execution of its aggressive expansion initiatives. Canopy’s gross margin before fair value impacts in cost of sales accounted for 15% of net revenue and came in at $13 million.

Canopy attributed its decreased gross margins on the $16 million in operating costs the company experienced on its facilities that’s capacity was under-utilized or not producing cannabis yet. Canopy’s product mix pivot away from higher-margin products in their opinion, also played a role. 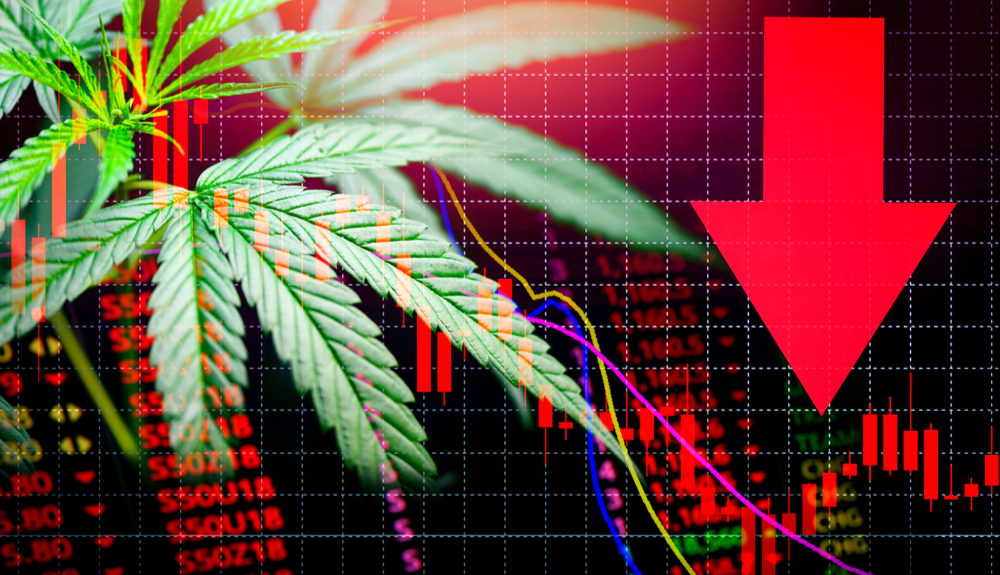 Analysts Expectations – Swing and a Miss

According to Refinitiv, the consensus amongst industry analysts had Canopy reporting a fiscal Q1 2020 loss of $0.70 per share on revenue of $107 million.

As previously mentioned, Canopy’s actual earnings per share (EPS) wasn’t even close to the analyst predictions, coming in at $3.70. Revenue missed the mark as well coming in at $90.5 million but not nearly as bad a EPS.

Revenue growth drivers for Canopy came predominately from the newly legalized Canadian adult-use market. The company saw its Canadian medical sales fall off by 39%. Strong growth in international markets allowed Canopy to realize a small loss of 5% on its overall medical segment.

On a more positive note, Canopy achieved a record harvest in the quarter of more than 40,000 kgs. This was one of the driving forces behind the company’s overall revenue growth. It was Canopy’s first full-scale harvest since its large greenhouses were retrofitted. Quarter-over-quarter the company realized growth in this area of 183%.

Commentary from the Current and Former CEO

“Our recent harvests are proof that our focus on operational excellence is working, and we look forward to showing both our Canadian and U.S. customers what we’ve been working on behind the scenes to prepare for the next wave of products coming later this year.”

“Canopy Growth continues to execute on the emerging opportunity for increasingly sophisticated global and national recreational and medical products. This is a vision and dedication exercise that is designed to reward shareholders over a huge and rapidly emerging market. August has always been a buying opportunity.”

Cannabis Stocks Across the Board Plunge

Yesterday evening’s adverse earnings report from Canopy Growth has struck fear into the cannabis market, causing share prices throughout the sector to sink even lower.

Shares of Canopy gapped down over 10% this morning and were unable to rebound whatsoever. WEED stock closed trading today at $36.41, down nearly 15% on the day.

As we mentioned, Canopy isn’ the only stock seeing red today as shares of the company’s U.S. ally Acreage Holdings (CSE: ACRG.U) (OTCQX: ACRGF) are being pummeled as well. Canopy and Acreage have plans to merge contingent on the United States lifting its Federal ban on cannabis first. ACRG.U stock closed trading today down over 10% at $10 per share.