Canopy Growth (TSX: WEED) (NYSE: CGC) Founder and Co-CEO Bruce Linton took some heat late last week after it was reported via SEDI insider filings that the leader of the world’s largest cannabis company exercised and sold off nearly 1/3rd of his Canopy stock options. The options exercised by Linton had strike prices that ranged between $2.95 – $24.12. President and Co-CEO Mark Zekulin made similar trades around the same dates.

Investors quickly took to social media and stock market message boards to voice their displeasure over the news. Many viewed Linton’s move as him insinuating that Canopy’s stock had topped or that his move could, in fact, create a phycological top in the same way that insider buying can create a phycological bottom. Canopy’s recently earnings did not help the matter either. Investor sentiment was already slightly on the negative side. 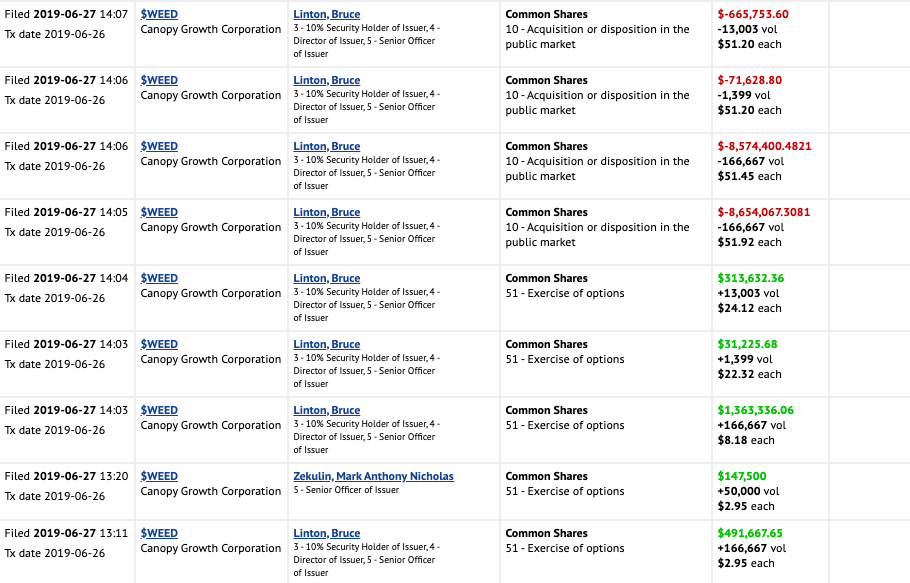 Many others took the complete opposite stance and were quick to defend the pot mogul stating that he had every right to take some profit off the table. It’s not as if he sold off all of his position. The market seems to support this side of the crowd as the overall reaction to the downside was minimal. Linton has without a doubt more than earned the right to cash out a portion of his options. Canopy’s meteoric rise to the top has not only made Linton a multi-millionaire but many other early investors as well.

Let’s not forget, Linton receives the majority of his compensation for his role as Canopy Co-CEO in the form of equity which he does so in order to help the company conserve capital for operations and expansion. Many top executives can be hesitant to take some equity off the table as they don’t want to send a negative signal to the market. Anything can happen in the financial markets so we can’t blame Bruce Linton for making this move. At the end of the day, he has earned the right to do so.