Cannabis Short Sellers Bank $1.76 Billion in Q3, Up Another $200 Million Since Friday - The Cannabis Investor

Cannabis Short Sellers Bank $1.76 Billion in Q3, Up Another $200 Million Since Friday

As Shorts Continue to Pile In and Regulatory Issues Fade, The Potential for a Massive Short Squeeze is Heightened

The cannabis market is famous for making legendary runs and in the process has created many marijuana millionaires. As with any stock or security, the share price can move quickly in either direction. With the sector seemingly in free fall, we are seeing a new wave of millionaires being created that have bet against cannabis stocks in hopes that they will drop. I am referring to the group of investors known as ‘short-sellers’.

Short sellers are essentially the opposite of a long investor. A short seller or ‘short’ sells shares in a stock they don’t own by borrowing it from the brokerage in anticipation that those shares will decline in price. If all goes to plan, the short will purchase the shares back in the market at a lower price thereby covering the short position and pocketing the difference in price.

The shorts started 2019 deeply in the red as cannabis stocks were in the midst of another epic run. Since late Q1 2019, the cannabis sector has been in a downswing and with weaker than expected earnings and regulatory scandals from companies like CannTrust (TSX: TRST) (NYSE: CTST), the market has struggled to reverse.

Most experts predicted a fall rally in cannabis equities but just when it looked like the bear market was on the rebound news on the vaping health crisis hit the market like a ton of bricks. According to data from S3 Partners, short coving in September had already begun before the media got ahold of the vape news.

After a rough start to the year, shorts have been in control since the end of Q1 and in Q3 alone have racked up roughly $1.76 billion in gains. Since Friday, shorts have taken full advantage of the vaping media scare and in the process banked another $200 million in profits.

Even though it has been proven that likely all of the vapes that contributed to the vaping related health issues were from the illegal black market, the damage from the news media was already done. Shorts, which had already begun covering their positions in early September took this opportunity to dig in rather than finish covering their short positions. The short squeeze many had been predicting was ultimately delayed due to unforeseen negative industry news.

This brings us to where we’re at now with short positions at almost ludicrous levels as shorting pot stocks has become a trendy thing to do despite the very high borrow rates being charged. Shorting in the cannabis sector is very expensive with the average borrow cost coming it at over 26% compared to less than 1% for the overall stock market. Stocks like Tilray (NASDAQ: TLRY), Aurora Cannabis (TSX: ACB) (NYSE: ACB) and Canopy Growth (TSX: WEED) (NYSE: CGC) currently have the highest borrow rates at 66.08%, 44.08% and 39.33% respectively. Unless the market continues to go the shorts way, carrying a position at these rates is not sustainable for the long term. 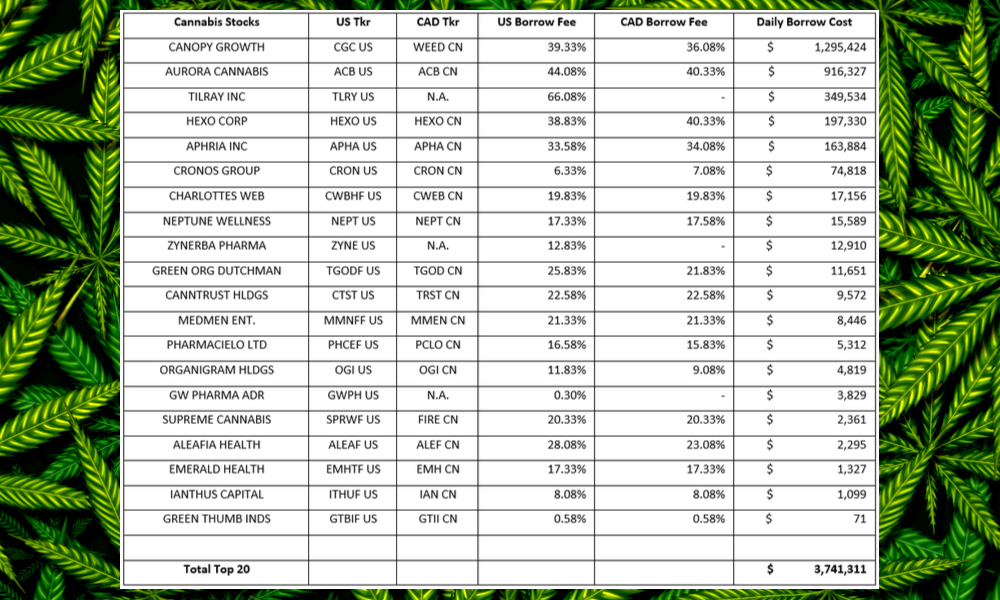 S3 Partners, a leading provider of financial data, released information showing the majority of the shorting has been mostly concentrated in 20 big name cannabis stocks. This group of 20 stocks makes up over 80% of the sector’s short interest. Companies like Canopy Growth (TSX: WEED) (NYSE: CGC), Aurora Cannabis (TSX: ACB) (NYSE: ACB), GW Pharma (NASDAQ: GWPH) and Cronos Group (TSX: CRON) (NASDAQ: CRON) currently lead the pack in terms of largest short positions. As is always the case in the stock market, what goes up can come down and what goes down can always come back up again. All factors considered and with the shorts so overextended, it seems the market could be headed for an epic all-time short squeeze in these heavily shorted pot stocks.

All of the issues that have contributed to the current status of the cannabis sector will likely fade away and with very large catalysts in the U.S. looming a surprise announcement could send shorts scrambling to cover. The short-covering buying added with the buying from enthusiastic longs could be the perfect formula for a massive reversal.

Below is a list of the current top 20 most shorted cannabis stocks. This list is a good starting point for those looking to establish positions in anticipation of a large short squeeze.

The shorts are now up to their eyeballs in borrowed shares and fees. The market can turn on the drop of a dime and paying 30% or higher to carry a short position only works when the market is your friend.

You’ll want to make sure you have your plan in place and plenty of ammo ready when the day comes that the shorts get caught with their pants down. 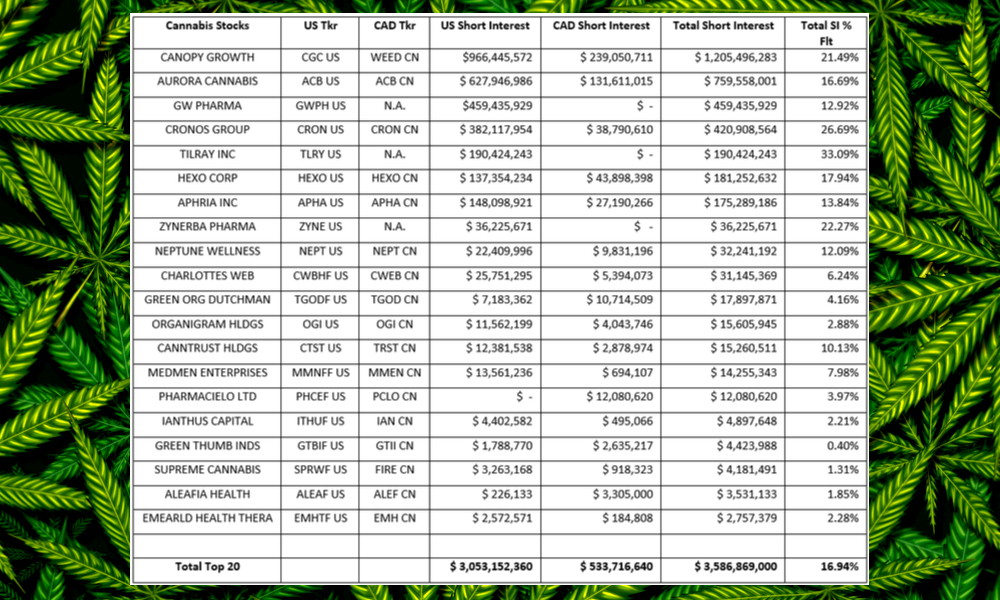