There’s plenty of baseball lingo in investing: everyone wants to hit a home run with a team of utility players who turn out to be all-stars. Investors pick their stock rosters, fine-tune their squad (team) and aim to outperform the competition by maintaining focus and taking some big swings. Well, you probably know about Moneyball and the now decades-old trend to look at player statistics that really win. Baseball and investing are both math-heavy games with a lot of ratios to look at. As we get closer to baseball playoff season, let’s evaluate which players in a cannabis stock portfolio have what it takes down the stretch.

Think about a player that has great potential: maybe it’s an 18-year-old with a cannon arm who needs more coaching. Just because he’s not in the big leagues doesn’t mean he can’t get ready with the right resources. Major cannabis operations are still being built out, even though companies are sitting on the money to get them done. They aren’t yet up and running and delivering revenue, but progress is steady. To select the best prospects to deliver returns to cannabis investors based on potential and investment, let’s look at a specific metric that helps us understand weed stocks.

This measure helps us look at the proportion of a company’s Enterprise Value (EV) to its Fully-Funded Capacity, i.e. the amount of its projected production where the company actually has capital investment money ready to go. Enterprise value is the sum of market cap, debt, cash, equity, and assorted liabilities–it’s a dollar amount. Capacity, whether funded or not, is measured by the weight of the weed itself, in kilograms. We get EV/FFC by taking a company’s enterprise value and multiplying by 1000, then dividing by fully-funded capacity. This stat gives us a read on whether the market is fully taking into account the company’s real potential. 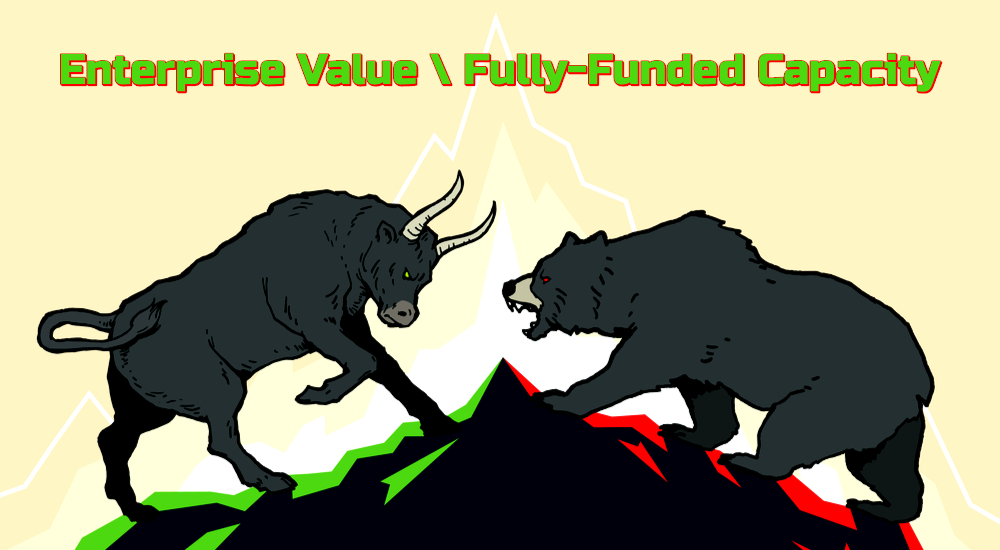 Using EV/FFC to Unlock Value in These 4 Cannabis Stocks

Aleafia Health (TSX: ALEF) (OTCQX: ALEAF) is one of the best buys based on enterprise value EV/FFC. The lower this number comes out to, the more evenly valued the stock is with respect to its ready-to-go production. In Aleafia’s case, it’s sitting at just 2.2x. Aleafia has its hands in a lot of the cannabis value chain, from cultivation to clinical operations, so it’s important for them to not put the cart before the horse. Aleafia’s EV/FFC measure reflects a focus on licensed production and a nice opportunity for investors to buy into its vertically integrated model. Think of a ratio like Price to Earnings (P/E) or Price to Sales (P/S) and you have a sense of how these idiosyncratic measures of a company’s value serve to give the market ranges of reason, indicating inflation or undervalued shares.

In mid-June, it was reported, Aleafia became the first licensed producer (LP) to officially set up a large-scale outdoor grow in Canada and quickly received the second portion of its license to expand into their full operation. More recently, Aleafia announced its biggest order ever, one that was larger than all of its 2018’s combined cannabis revenues. Just last week, Aleafia reported record Q2 revenue which increased 159% quarter-over-quarter. Cannabis revenues grew 377% Q/Q.

WeedMD (TSXV: WMD) (OTCQX: WDDMF) is even lower than Aleafia at 1.3x EV/FFC. WeedMD is a Canadian LP of cannabis products for both the medical and recreational markets. The company owns and operates a 158-acre state-of-the-art greenhouse and outdoor facility located in Strathroy, ON. WeedMD through its wholly-owned subsidiary, CX Industries, operates a fully-licensed 26,000 sq ft extraction and processing facility located in Aylmer, Ontario. The company is also one of the four LPs capitalizing on the outdoor grow opportunity in Canada. Cannabis grown outdoors costs substantially less than in the standard greenhouse or indoor facilities. Earlier this month, WeedMD announced it expects to report Q2 net revenues of $8 million. The company will announce its second-quarter earnings on August 29, 2019.

CannTrust Holdings (TSX: TRST) (NYSE: CTST) has a discounted EV/FFC at just above 4x. CannTrust’s addition to this list should come with an asterisk next to it due to the company’s recent slew of issues stemming from it’s July 8th failed Health Canada compliance report. The company’s mounting difficulties have caused multiple regulatory investigations to pop up putting their cannabis licenses in jeopardy. A few days ago, The Ontario Cannabis Store (OCS) informed CannTrust of their intent to return $2.9 million worth of the company’s product that they deemed as “non-conforming”. If you are considering CannTrust as an investment be sure to do your homework first. The stock comes with big risks, but with big risk comes the potential for big rewards.

Organigram Holdings (TSX: OGI) (NASDAQ: OGI) also ranks well with regard to this important indicator coming in at just above 5x. The recent bear market in cannabis equities has caused former top-performing stocks like Organigram to come back to earth. Historically the best time to buy pot stocks has been in August. Earlier this year, Organigram made a big move and uplisted its U.S. OTCQX listing to the NASDAQ. The company followed that up by making a similar move this week and uplisting its TSXV shares to the TSX Big Board Exchange. In mid-July, Organigram released strong fiscal Q3 2019 earnings which saw the company’s net revenue surge 621%. 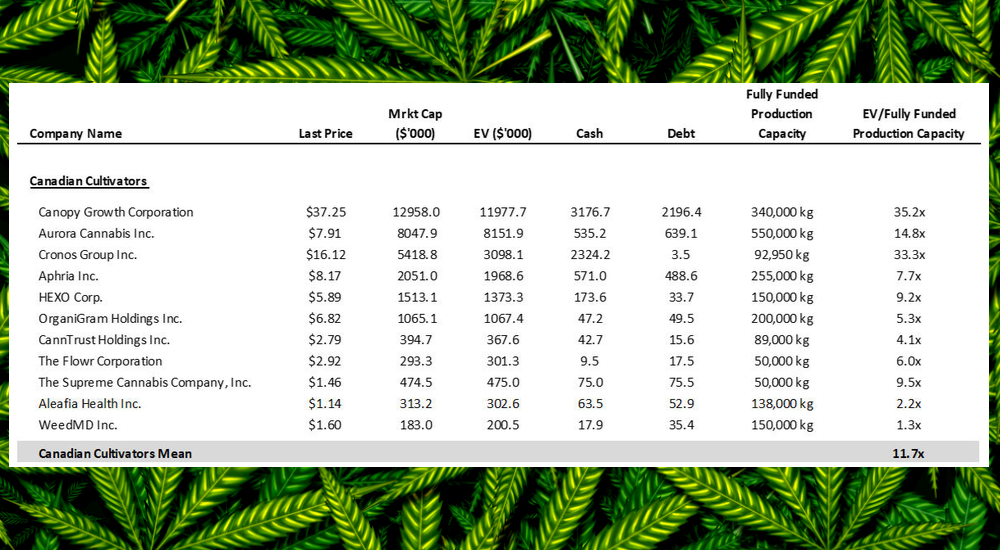 Some big names don’t look so attractive when analyzed through the prism of EV/FFC:

Beyond this ratio, it’s important to dig into the funding mechanisms that cannabis companies are using to bring production capacity online. Financial officers are using debt, advanced payments on future production and other methods to infuse needed capital into growing facilities. Investors also need to keep their eyes on the operations once they are producing, keeping in mind factors like efficiency and revenue per kg.

We will keep you updated on opportunities for bargain-hunters who are sharp enough to look at those indicators, too.

Aleafia Health is a paid client of The Cannabis Investor.