Cannabis Earnings Roundup: Has New Leadership Put the "Big 4" Canadian LPs on the Path to Profitability? - The Cannabis Investor

Cannabis Earnings Roundup: Has New Leadership Put the “Big 4” Canadian LPs on the Path to Profitability?

* Unless otherwise noted, all figures below are in Canadian dollars (CAD).

“We’re proud of our strong first-quarter performance, despite unprecedented volatility and uncertainty in the market and across the globe. We grew our revenue year-over-year and are seeing market share improvement, notably achieving number one market share in cannabis-infused beverages in the Canadian market.  We are implementing a renewed corporate strategy with the appointment of a new leadership team, which will focus on delivering quality products to our consumers, positioning our business for continued growth.  The proposed retooled Acreage announcement refocuses our entry for the evolving U.S. market, where we are seeing increased momentum.” – David Klein, Canopy Growth CEO

“At Aphria, we are setting ourselves apart from the rest of the cannabis industry. We have generated some of the strongest sales growth, we have one of the strongest balance sheets and cash positions, compelling consumer brands and a well-diversified global business. We are grateful for the dedication of our employees for whom our commitment to protect their safety is unwavering and remains a founding principle of our company. Our strong finish to fiscal year 2020 demonstrates that this was a transformative year for Aphria, as our net revenue increased 129% from fiscal year 2019. We continue to focus on capturing strong market share in Canada by executing upon our strategic plan and positioning Aphria as a leader in category innovation. With exciting new product categories and line extensions launching in the very near future, we believe our award-winning adult-use portfolio remains unmatched in the industry. By building on this foundation, we remain focused on the highest return opportunities for growth and long-term value creation.” – Irwin D. Simon, Aphria Chairman & CEO

“In the second quarter of 2020, we continued our progress despite unprecedented shifts in our industry and the global economy. We officially entered the Israeli medical cannabis market, with Cronos Israel commencing the sale of PEACE NATURALS™ branded dried flower products to medical patients. During these extraordinary times, it is very encouraging to see that we are making progress against our strategy across our global footprint.” – Mike Gorenstein, Co-Founder & Executive Chairman of Cronos Group

“As reported in our September 8, 2020 business update, our Q4 demonstrated progress in the rationalization of SG&A and cash burn along with continued leadership in both Canadian and international medical. However, Aurora has slipped from its top position in Canadian consumer, a market that continues to support material growth and opportunity. My focus is, therefore, to re-position the Canadian consumer business immediately. We look to expand beyond the value flower segment, leverage our capabilities in science and product innovation and put our effort on a finite number of emerging growth formats. This entails prioritizing our San Rafael, Aurora and Whistler premium brands in flower, pre-rolls and vapor, which will be shortly followed by strategic marketing and innovation efforts in concentrates and edibles.” – Miguel Martin, CEO of Aurora Cannabis 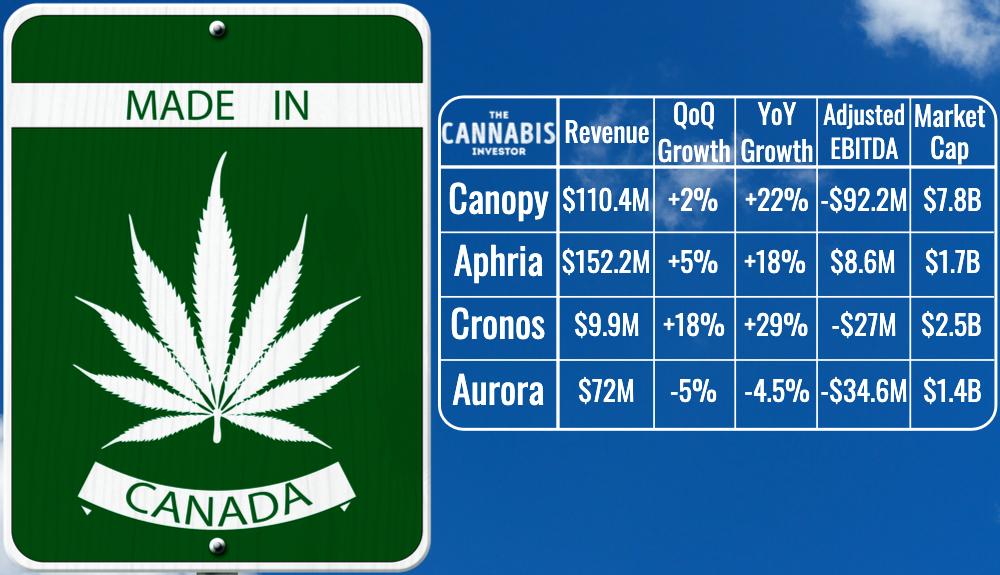 The Canadian cannabis industry still has a ways to go on its road to recovery. Aurora Cannabis, in particular, is undergoing an extensive business transformation in an attempt to salvage the mess left by Terry Booth and his outlandish M&A spending. A similar story can be said for Canopy Growth in the post-Bruce Linton era.

As of now, all four LPs have replaced their original CEOs and implemented much more fiscally responsible strategies. As a result, certain partnerships are being cancelled, production facilities closed, employees laid off and spending slashed. As expected, these moves have caused revenues to dip, but if all goes to plan, it should only be a temporary issue.

New leadership believes these changes are necessary to right-size their company’s operations and drive profitability, but the results are still being determined. The rising retail store count in Ontario should ultimately drive revenues for all four companies and right-sized operations will hopefully put them on the path to profitability.