Shares of Aurora Cannabis (TSX: ACB) (NYSE: ACB) sold off today thanks in part to the new research note by GLJ Research analyst Gordon Johnson. The GLJ analyst officially initiated coverage on ACB stock today and his view of Aurora is extremely bearish, to say the least.

In a note to clients, Johnson placed a ‘Sell’ rating on Aurora stock and slapped the company with a $0 per share price target. In other words, the analyst said: “Aurora Cannabis’ equity is effectively worthless.”

Not the words Aurora shareholders wanted to hear and the stock’s reaction today seems to echo that sentiment.

Johnson mentioned Aurora’s existing $200 million Bank of Montreal credit facility which the company recently added $160 million to. The BMO facility is backed by Aurora’s producing assets and the analyst points out that this debt comes with several restrictions that take effect on the last day of September 2020.

The analyst goes on to say that Aurora’s balance sheet is stretched to the max and it’s become clear that the company is quickly running out of capital.

“With roughly nine months to go before these covenants take effect, and our work pointing to continued operating losses for ACB, as well as new open market equity issuances under Aurora’s ATM program, and a further deterioration in Canadian cannabis industry fundamentals on tap, we see risk to Aurora’s ability to continue borrowing from BMO as soon as June 2020,” stated Johnson.

Johnson believes that Aurora’s lenders and shareholders should be concerned about the BMO debt due to the fact the company recently suspend construction at its Aurora Sun and Nordic 2 cultivation facilities. As previously mentioned, the BMO facility is secured by these assets among others. 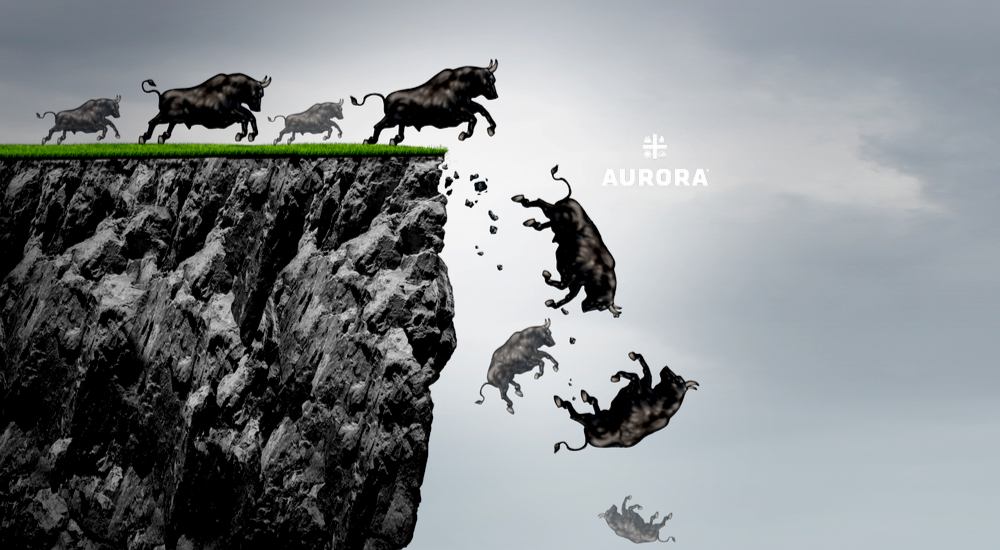 At the current rate the company is burning through cash, Johnson predicts Aurora will soon face major liquidity crunch before it reaches profitability. The analyst says that Aurora has made multiple decisions of late that he deemed risky for ACB shareholders.

Johnson pointed to the following questionable moves by Aurora’s management to back up his point:

Johnson is not confident that the number two Canadian licensed producer (LP) will be able to navigate through the bumpy road ahead.

“As the pace at which Aurora Cannabis is burning cash becomes clear to the market, barring additional resources from the capital markets, our work suggests the company will run out of cash before 7/1/20,” added Johnson.

Shares of Aurora Cannabis’ TSX listed stock closed today’s trading session at $3.31 per share, down 4.61% on the day. Overall, today’s price action could have been much worse. Taking a look at the ACB stock chart below, it seems Aurora’s stock is holding up pretty well as it continues to try and put in a bottom similar to what Canopy accomplished nearly a month ago. Historically, Aurora has been a lagging indicator of the cannabis sector. The complete opposite of Canopy which is seen as the industry bellwether and a leading indicator for pot stocks.

Will Johnson’s prognosis become a reality? Only time will tell but on further inspection, the $0 price target may be a tag aggressive. One thing is clear though, Aurora’s management team is about to face some serious decisions in early 2020 and how they decide to tackle these obstacles should give investors a better picture of which direction the company’s stock is headed. 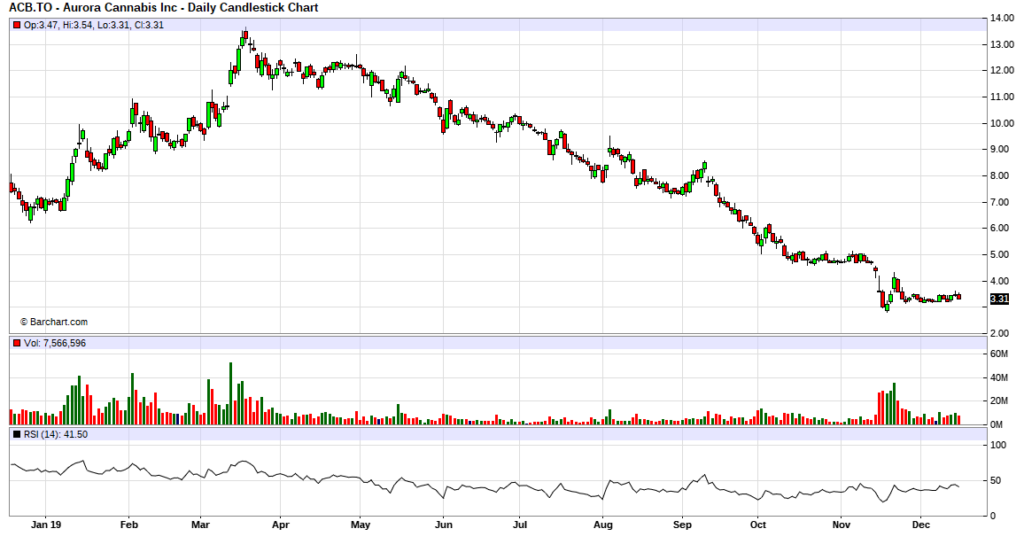