Mike Tyson is easily one of the most famous humans on the planet and, during his incredible life, the former boxing champion has done everything you could imagine.

From winning the heavyweight title at 20 to earning $300 million in his boxing career to owning pet tigers to making face tattoos cool to biting off another man’s ear to dabbling in pro wrestling to having his own video game and even racing pigeons! The champ has done it all.

Nowadays, Mike Tyson lives a much calmer life, which revolves around cannabis as an outspoken marijuana advocate and successful businessman.

When California legalized recreational cannabis in 2016, Tyson showed an impressive business savvy by getting in the cannabis game quickly. He wasted no time in opening his first Tyson Ranch in El Segundo, California. According to the Tyson Ranch website: “Tyson Ranch is a licensing & branding company founded by Mike Tyson. Consistency and quality are at the core of our company with the mission to make cannabis universally understood.”

In addition, being a branding company that positions the 53-year-old Tyson as a tastemaker in the emerging cannabis industry, Tyson Ranch is a 40-acre grow operation that cultivates recreational and medicinal cannabis, along with hemp and CBD products. And upon completion, the Tyson Ranch is poised to become even more.

The ultimate goal of Tyson Ranch is to create a popular tourist destination in the form of a massive entertainment complex, complete with retail, accommodation, camping grounds, an amphitheatre, and even ‘Tyson University,’ an educational facility that will teach the art and science of homegrown cannabis.

💡Also Read: Psychedelic Stocks May Be One of the Most Undervalued Opportunities, Here’s How to Play the Thriving New Sector

Tyson Eyes the Caribbean for Next Cannabis-Themed Tyson Ranch

If Tyson’s ambitious plans for the California location weren’t enough, the champ is now eyeing his second Tyson Ranch — this time in Antigua, a small tropical island in the Caribbean’s West Indies.

Antigua has long been a popular tourist destination, but when the Antigua & Barbuda Cannabis Bill of 2018 opened the door for cannabis tourism — bolstered by attractive government incentives — the foreign investment wheels started turning. In Antigua, investors are not restricted in terms of how much they can own or control. Entrepreneurs looking to start a venture, whether nationals or from abroad, can transfer property titles in roughly 40 days — making for a very nimble and business-friendly environment.

After visiting the island twice in 2019, Tyson engaged in talks with the Antigua and Barbuda government regarding the establishment of a ‘wellness centre’ that “will rely upon medicines made from hemp and other organic substances to cure deadly diseases.” The Tyson representatives went on to explain that “a similar centre has been in operation in Costa Rica for seven years and that it has grown because of its 87 percent success rate at reversing many diseases including Alzheimer’s, depression, and other hard-to-cure illnesses that plague humans.”

The newly planned Antigua wellness centre is expected to be located within an existing hotel property that the Tyson firm will either lease or purchase.

“The law governing hemp will be addressed by the Parliament next month, February 2020,” explained the Tyson team in a statement. “The Cabinet declared that its members continue to have an interest in making the Antigua and Barbuda population become aware of the changes in lifestyle that are necessary in order to produce a healthier nation.”

Check out some amazing pictures from Tyson’s recent trip to Antigua, where he had the opportunity to hang out and smoke cannabis with the local Rastafarian community. Looks like an incredible experience for the champ. 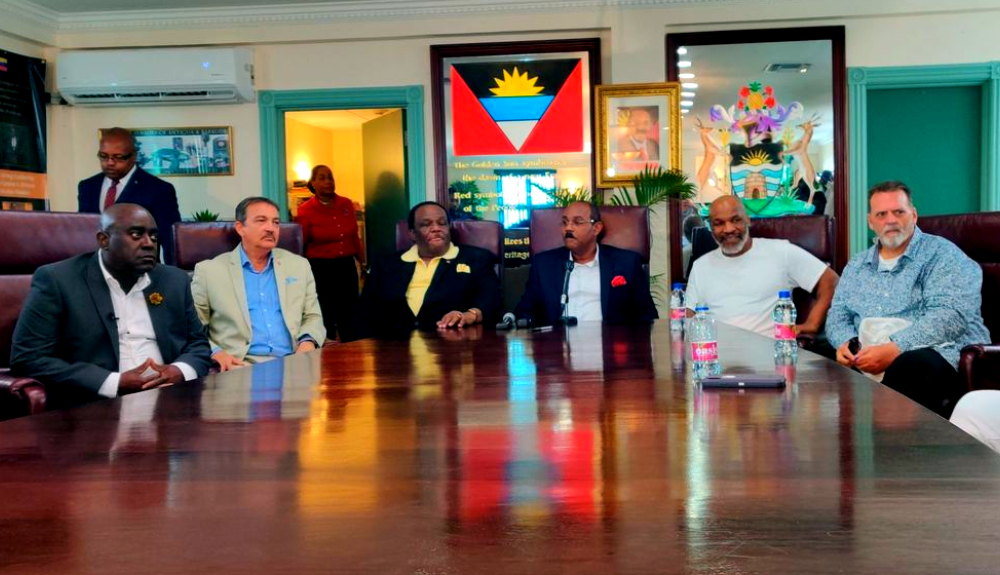 Tyson has never been shy about his views, so nobody was shocked to learn that Tyson enjoyed the occasional joint.

But when he claimed on his Hotboxin’ with Mike Tyson podcast that he smokes USD $40,000 worth of cannabis per month, it seemed like a stretch. Based on current price estimates, that would mean that the former champ smokes 165 grams (or six ounces) of pot per day. Even Iron Mike doesn’t have those kinds of iron lungs! Or does he?

And speaking of being knocked out, Tyson also recently expressed plans to use his growing Tyson Ranch brand to help fuel a reboot of his hugely popular 90s Nintendo game, Mike Tyson’s Punch-Out!!

“Hey, listen, we’re going to start our own Punch-Out!! game and our own Tyson Ranch computer game and bring it back to life, man,” Tyson told Shacknews earlier in May. “Bring back Mike Tyson’s Punch-Out!! I think it’s an opportunity of a lifetime for me by showing that I can be a fighter and an entrepreneur. That’s something I am looking forward to proving to all my critics, and supporters that I can succeed in this field just as I succeeded in sports.”

But while Tyson’s interests are varied, it’s clear that his primary focus is now cannabis — and the positive impact that he can make with it. After claiming that marijuana has changed his life for the better, he told Cannabis & Tech Today magazine, his primary inspiration is “how much good I could do by helping people with cannabis.”

I don’t know about you, but when life starts to feel somewhat normal again following the wild year we’ve had, a trip to a cannabis theme park on a tropical island sounds JUST ABOUT RIGHT.

💡Also Read: 3 Reasons Why Big Pharma Hates the Threat of Psychedelic Medicine and 1 Company That’s Facing Them Head On