(Unless otherwise stated, comparisons are made between Fiscal Q3 2019 and Fiscal Q2 2019 results)

“I’m exceptionally proud of our company and team as Aurora continues to deliver on our domestic and international growth strategy. We achieved solid revenue growth and strong operating results in a quarter proven challenging across the industry.  We are laser focused on building a long-term sustainable business,” said Terry Booth, CEO. “During the quarter, we formally welcomed Nelson Peltz a key strategic advisor.  He has been incredibly engaged, collaborative, and strategically focused on assisting our pursuit of growth in global markets and with mature companies in adjacent industries.”

Glen Ibbott, CFO, added, “Aurora is an extremely active and diversified company, leading the industry in cannabis research, product development, cultivation, global scale, and revenue growth.  With a solid Q3 on all fronts, it’s time to move the yardsticks for the industry again.  The company we have built with purpose through both organic growth and targeted acquisitions has provided a unique opportunity: continue to lead the industry in revenue growth while also progressing to positive operating earnings in the near term.”

The Aurora Sky and Bradford facilities are now operating at full capacity. With this, the Company’s annualized production run rate across its operational facilities is in excess of 150,000 kg per annum, based on planted rooms.

Aurora reiterates its target for Q4 with production available for sale in excess of 25,000 kg. Management intends to allocate a portion of this capacity to its inventory for manufacturing new products. Aurora remains focused on having vapes and certain edibles ready for launch under new regulations in the Canadian consumer market which are expected toward the end of the calendar year.

With production ramping up, the Company continues to scale up manufacturing capacity, with innovation and technologies aimed at reducing time from harvest to market. The Company anticipates that increased processing, packaging and delivery efficiencies in Q4 and beyond will accelerate availability of product.

Supply to Europe and other international markets is expected to increase as more of Aurora’s production facilities receive EU GMP certification. The Bradford facility has recently undergone an audit to obtain EU GMP certification. In Q3, the Company began exports of full spectrum cannabis extracts in Germany. Management anticipates these sales will contribute to growth given the higher margins in extracts.

Oil extraction capacity has been a constraint during the second and third fiscal quarters of 2019. Subsequent to quarter’s end, Aurora expanded its internal extraction capacity to almost 7,000 kgs per quarter currently and will reach almost 16,000 kgs per quarter in fiscal Q1. As well, the Company’s extraction partner Radient Technologies is scaling up commercial production at its Edmonton facility. Consequently, Aurora anticipates production of extract-based products to increase, with the full impact starting to materialize towards the end of fiscal Q4. This increase in internal and external extraction capacity will enhance Aurora’s ability to produce derivative products at scale, which management expects will have a positive impact on both revenues and gross margin.

With Aurora Sky now operating at full capacity, the Company anticipates continued reduction in production and manufacturing costs allowing cash costs per gram to continue to trend lower. Management reiterates its expectation that the average cash cost to produce per gram at its Sky Class facilities will be below $1.

Aurora defines production rate as the capacity of all planted rooms that have been approved by the regulator for sales, using anticipated annualized harvests at maturity based on a historical yield per plant. These targeted yields have been met or exceeded at all of Aurora’s current operating facilities. To view a video overview of Aurora’s production facilities, click here: https://youtu.be/irTfAXbFS38.

On May 14, 2019, the Company filed a prospectus supplement (the “Prospectus Supplement”) to the Shelf Prospectus.In connection with the Prospectus Supplement, Aurora entered into a Sales Agreement dated May 14, 2019 with Cowen and Company, LLC (“Cowen”) and BMO Capital Markets (“BMO”) who will act as the selling agents (the “Selling Agents”) for the sale of common shares of Aurora (the “Common Shares”) by way of “at-the-market distributions” on the New York Stock Exchange in the United States. Subject to the terms of the Sales Agreement and applicable regulatory requirements, Common Shares in the aggregate amount of up  to US$400,000,000 may be issued and sold from time to time at the discretion of Aurora over a period of up to 25 months. The Common Shares will be distributed at market prices prevailing at the time of the sale of such Common Shares and, as a result, prices may vary as between purchasers and during the period of distribution. The net proceeds of such sales, if any, will be used for general corporate purposes, including: (i) working capital; (ii) potential future acquisitions; (iii) debt repayments; and (iv) capital expenditures. The volume and timing of sales, if any, of Common Shares is at the discretion of Aurora.

Aurora expects to use the net proceeds from the prospectus will support its expansion initiatives, global partnership strategy, and to continue the Company’s accelerated growth.

This news release does not constitute an offer to sell or the solicitation of an offer to buy, nor shall there be any sale of these Securities in any jurisdiction in which such offer, solicitation or sale would be unlawful prior to the registration or qualification under the securities laws of any such jurisdiction. 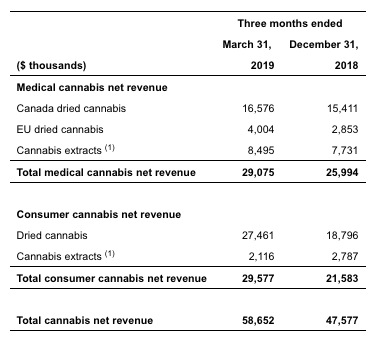 The Company granted a total of 383,000 options to purchase common shares of Aurora to Directors and Officers of the Company. The options vest annually over 36 months and have a weighted average exercise price of $9.35  per common share.

Headquartered in Edmonton, Alberta, Canada with funded capacity in excess of 625,000 kg per annum and sales and operations in 24 countries across five continents, Aurora is one of the world’s largest and leading cannabis companies. Aurora is vertically integrated and horizontally diversified across every key segment of the value chain, from facility engineering and design to cannabis breeding and genetics research, cannabis and hemp production, derivatives, high value-add product development, home cultivation, wholesale and retail distribution.

Highly differentiated from its peers, Aurora has established a uniquely advanced, consistent and efficient production strategy, based on purpose-built facilities that integrate leading-edge technologies across all processes, defined by extensive automation and customization, resulting in the massive scale production of high-quality product at low cost. Intended to be replicable and scalable globally, our production facilities are designed to produce cannabis of significant scale, with high quality, industry-leading yields, and low per gram production costs. Each of Aurora’s facilities is built to meet EU GMP standards. EU GMP certification has been granted to Aurora’s first production facility in Mountain View County, the MedReleaf Markham facility, and its wholly owned European medical cannabis distributor Aurora Deutschland.

Aurora’s Common Shares trade on the TSX and NYSE under the symbol “ACB”, and are a constituent of the S&P/TSX Composite Index. 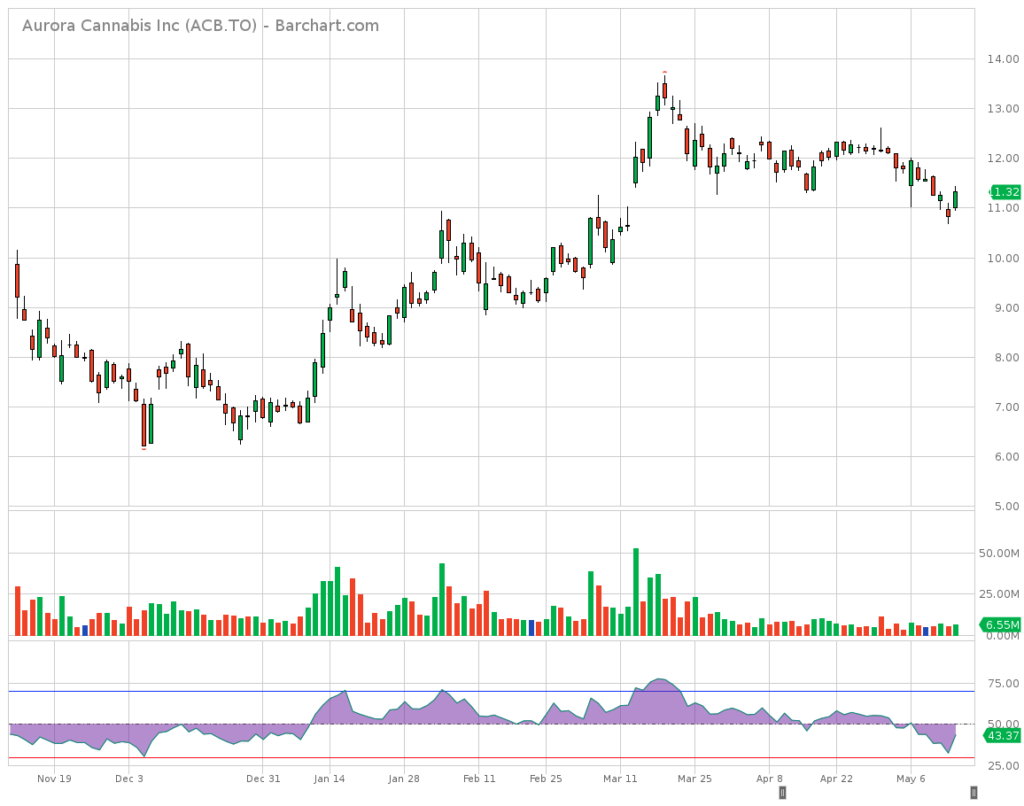 Create your own ACB technical and interactive chart – Barchart

Technical Analysis for ACB by TradingView