It was a rough week for the former high flying Canadian licensed producer (LP) after it was reported that long time Chief Executive Officer Terry Booth was stepping down from his role as CEO of Aurora Cannabis (TSX: ACB) (NYSE: ACB) (FRA: 21P). Booth will stay on Aurora’s board of directors and serve as a strategic advisor to the company.

Michael Singer, Aurora’s current Executive Chairman will temporarily fill the vacant position as interim CEO until the company finds a permanent replacement. Aurora spun Booth’s departure as his retirement and confirmed the company is actively searching for his successor.

“Over the last seven years, Aurora has built an incredible platform and a leading position in the global Cannabis industry. I am proud and humbled to have led that journey with a deeply talented and passionate team of employees. While there is still much work to be done, the timing is right to announce my retirement with a thoughtful succession plan in place and the immediate expansion of the Board of Directors. These changes, along with the financial transformation which we are undertaking, should clearly demonstrate to investors that Aurora has the continuity, strategic direction and leadership it needs to transition from its entrepreneurial roots to an established organization well-positioned to capitalize on a global growth opportunity. In that spirit, and with my full support, the Board of Directors has appointed Michael Singer as Interim CEO effective immediately,” said the soon to be former Aurora Cannabis CEO Terry Booth in his departure statement.

“As part of the succession plan, I will become a Senior Strategic Advisor to the Board and remain a Director. Additionally, we’re welcoming new independent members; Lance Friedmann and Michael Detlefsen who bring a wealth of strategic and hands-on consumer products industry experience to the organization,” added Booth.

In addition to thanking Booth for his years of service and leadership, Aurora’s Chairman and new interim CEO Michael Singer stated, “I look forward to serving as Interim CEO and executing on our short-term plans, which include a rationalization of our cost structure, reduced capital spending, and a more conservative and targeted approach to capital deployment. These are necessary steps that reflect a fundamental change in how we will operate the business going forward.” 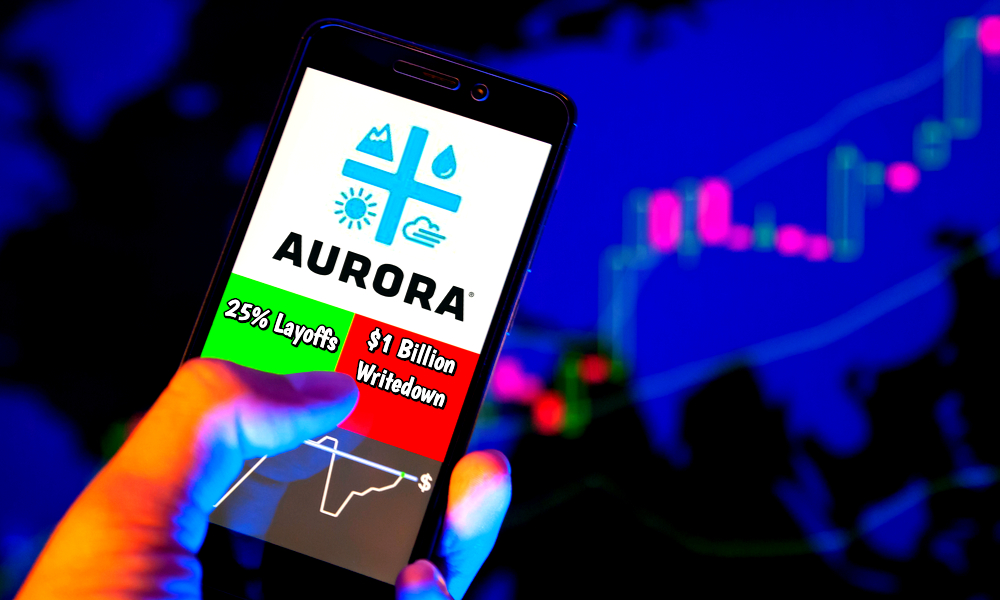 Also included in Aurora’s Thursday evening press release was the company’s fiscal Q2 2020 unaudited preliminary financial results. Aurora, which will release its full Q2 earnings report on February 13, 2020, provided the market with a glimpse of the thermonuclear bomb it’s about to drop.

Aurora anticipates fiscal Q2 cannabis revenues net of excise taxes of between $62 million to $66 million. The company also expects to report provisions for returns, price reductions and future provisions of roughly $12 million with nearly all relating to products sold in prior quarters. With these figures factored in, Aurora projects net cannabis revenues to come in at $50 million to $54 million.

A growing concern for investors and analysts has been the company’s debt and cash reserves. As of the end of 2019, Aurora’s consolidated cash position was $156 million, excluding $45 million of restricted cash.

Just days after Tilray reported slashing 10% of its staff, Aurora also announced the termination of 25% of the company’s corporate positions, the equivalent of 500 full-time employees. According to Aurora’s website, the company employs around 3,400 people in 20 countries across the globe.

“Look, we have let go 500 people and reset all our budgets internally. We expect that we will start to see improvements. We’re not flush with cash, but these changes here will allow us to get to a cash-flow positive situation.”

The layoffs are an attempt to conserve capital and provide the company with greater financial flexibility but some analysts believe it won’t be enough to make a major difference.

Chris Damas, cannabis analyst and author of The BCMI Report weighed in on the issue saying;

“Unfortunately, 10 percent in layoffs is not nearly enough expense cutting for Aurora to turn the corner in terms of operating profitability. It would be like putting a band-aid on a major artery wound when a tourniquet would be required to stem the bleeding.”

“Aurora is in a precarious position as its cash needs are likely to exhaust the resources at hand, including roughly $500 million in capacity on the company’s credit and at-the-market facilities. The rumoured reductions would manifest in roughly C$20 million in annual savings, though this pales in comparison to the C$160 million EBITDA loss we estimate for FY20.”

Following a thorough review of the company’s business operations, Aurora expects to report asset impairment charges on certain intangible and property, plant and equipment of $190 million to $225 million and goodwill write-downs of $740 million to $775 million.

Although impairment charges and goodwill write-downs don’t affect the current year’s cash flow, they do demonstrate the large mistakes made by management in the past.

“The assets being impaired are predominantly associated with our operations in South America and Denmark, as our estimate of the timeline for substantial growth extends in those markets. Our core Canadian cannabis assets are not impacted by these non-cash asset impairment charges,” said Ibbott. “We believe that the long-term opportunity for Aurora remains very compelling, despite a slower than anticipated rate of industry growth in the near-term. We also believe our approach to rationalizing the business and conservatively improving our balance sheet positions Aurora in a more stable position for sustainable growth going forward.”

As expected, Aurora’s stock plunged on Friday in reaction to the multiple negative catalysts disclosed in Thursday’s press release.

Shares of Aurora’s TSX listed ACB stock plummetted 15.2% on Friday to close the day at $2.26 per share. The company’s U.S. NYSE listed stock didn’t fare much better closing Friday’s trading session at $1.70, down 15.05%. Over on the Frankfurt Stock Exchange, Aurora’s German listed shares closed the week at $1.55 per share, down 15.41% on the session.

ACB stock has been trending sideways over the past month following the 2019 market downswing. After Friday’s big drop, the stock will now likely test the previous low of $1.96 and look to form support in the $2 range. Should ACB been unable to hold the $2 level it’s hard to say where the new bottom will be. 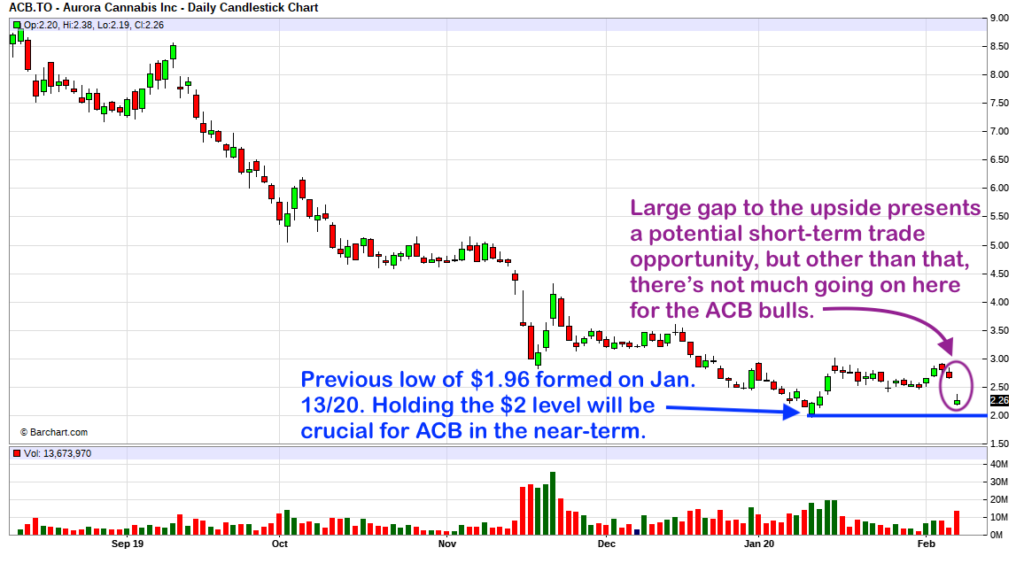