UFC boasts more than 300 million fans worldwide, with programming that is broadcast to over 170 countries and territories, in 40 different languages, to over one billion TV households.  The UFC Performance Institute, the world’s first mixed martial arts multi-disciplinary research, innovation, and training center, opened in Las Vegas in 2017  has served more than 400 athletes over the past two years.  The facility is a global leader in athletic performance research and provides support and educational services to athletes on health, well-being, nutrition, and injury prevention.

The research will be conducted at the UFC’s Performance Institute in Las Vegas, Nevada, in collaboration with UFC’s sports performance team, as well as with athletes who choose to participate in the studies. Clinical studies will focus on pain management, inflammation, injury/exercise recovery, and mental well-being. Aurora’s research will be led by Dr. Jason Dyck, Professor at the University of Alberta and a Canada Research Chair in Molecular Medicine. He also serves as an indendent director on the board of Aurora Cannabis, where he provides valuable oversight for the Company’s scientific efforts.

“Since the day we opened the Performance Institute, our primary goal was to offer UFC athletes the best possible training, nutrition, and recovery services,” said UFC President Dana White.  “This partnership with Aurora is an extension of that goal, and we’re looking forward to collaborating with Aurora to find new ways to improve the health and safety of athletes who compete in UFC.”

UFC®, is the world’s premier mixed martial arts organization and the largest Pay-Per-View event provider in the world. UFC boasts more than 300 million fans worldwide, including 70 million social media followers across all of its digital platforms, and its programming is broadcast in over 170 countries and territories to one billion TV households worldwide in 40 different languages. UFC produces more than 40 live events annually and consistently sells out some of the world’s most prestigious arenas. Since 2001, UFC has been proudly headquartered in Las Vegas, supported by a network of employees around the world. UFC’s current roster of athletes features more than 570 men and women representing over 55 countries. UFC FIGHT PASS®, the world’s leading digital subscription service for combat sports, delivers exclusive live events, thousands of fights on-demand, and original content to fans around the world. UFC was acquired in 2016 by global sports, entertainment, and fashion leader Endeavor, along with strategic investors Silver Lake Partners and KKR, in what is among the largest transactions in sports history. For more information, visit UFC.com and follow UFC at Facebook.com/UFC, Twitter, Snapchat and Instagram: @UFC.

Headquartered in Edmonton, Alberta, Canada with funded capacity in excess of 625,000 kg per annum and sales and operations in 24 countries across five continents, Aurora is one of the world’s largest and leading cannabis companies. Aurora is vertically integrated and horizontally diversified across every key segment of the value chain, from facility engineering and design to cannabis breeding and genetics research, cannabis and hemp production, derivatives, high value-add product development, home cultivation, wholesale and retail distribution.

Highly differentiated from its peers, Aurora has established a uniquely advanced, consistent and efficient production strategy, based on purpose-built facilities that integrate leading-edge technologies across all processes, defined by extensive automation and customization, resulting in the massive scale production of high-quality consistent product. Intended to be replicable and scalable globally, our production facilities are designed to produce cannabis of significant scale, with high quality, industry-leading yields, and low per gram production costs. Each of Aurora’s facilities is built to meet European Union Good Manufacturing Practices (“EU GMP”) standards. Certification has been granted to Aurora’s first production facility in Mountain View County, the MedReleaf Markham facility, and its wholly owned European medical cannabis distributor Aurora Deutschland. All Aurora facilities are designed and built to the EU GMP standard.

Aurora’s Common Shares trade on the TSX and NYSE under the symbol “ACB”, and are a constituent of the S&P/TSX Composite Index. 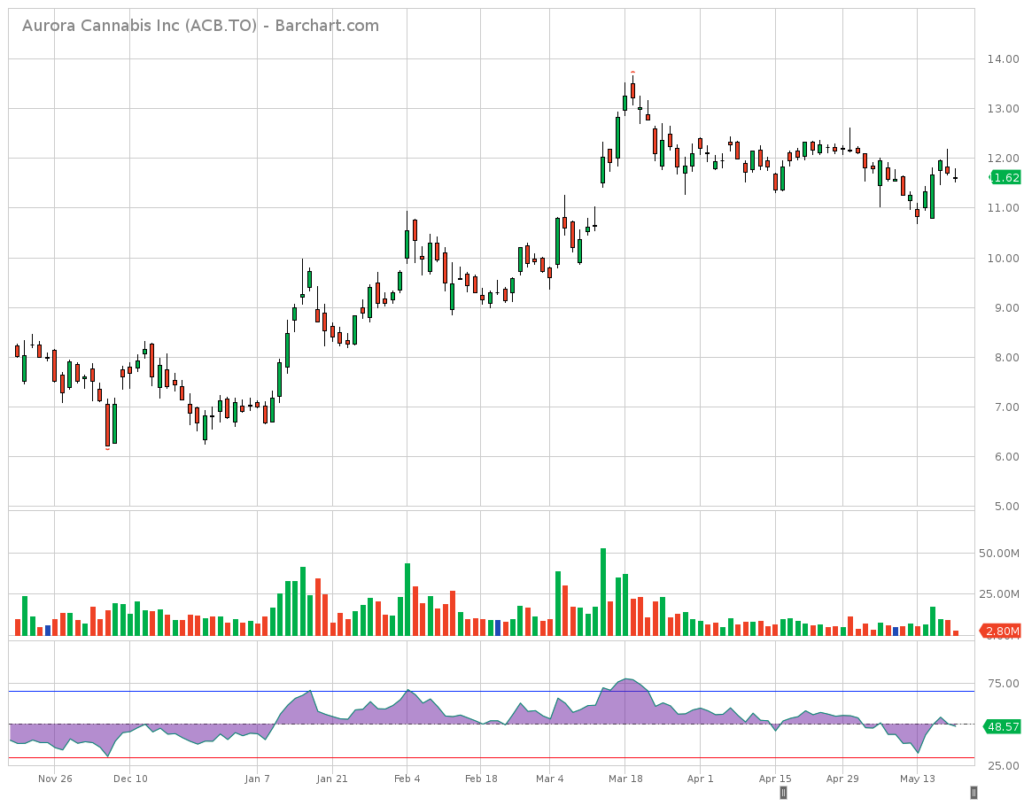 Technical Analysis for ACB by TradingView