Are Psychedelics Right For You? - The Cannabis Investor

Are Psychedelics Right For You?

And there has been a negative perception of one of the most common psychedelics, LSD, in part because of the stigma attached to it as a recreational drug used by the Bay Area counterculture in the late 1960s.

Another bad rap for LSD came from Army researchers at Edgewood Arsenal from 1955-1967, who attempted to weaponize LSD as an “incapacitating agent” and proposed sending a floating cloud of LSD into enemy forces.

But psychedelics credibility as a new tool for mental health has grown by leaps and bounds over the last few years, and that has put it on the radar of people seeking a better way of handling their mental health wellness.

The U.S. Food and Drug Administration’s (FDA) approval of Spravato, an esketamine (ketamine) nasal spray developed by Johnson & Johnson (NYSE: JNJ) owned Janssen Pharmaceuticals in March 2019, was a landmark move that propelled psychedelics into the consciousness of anyone considering a more effective treatment for treatment-resistant depression.

But it came with a caveat, according to Tiffany Farchione, the acting director of the Division of Psychiatry Products in the FDA’s Center for Drug Evaluation and Research. “Because of safety concerns, the drug will only be available through a restricted distribution system, and it must be administered in a certified medical office where the health care provider can monitor the patient,” said Farchione.

Experts in the field warn that the psychedelic experience should not be taken lightly. Not everyone is able to do what psychedelics want you to do, which is let go and surrender to the experience—what researchers call the “surrender state,” or a state of being that is related not only to the personality of someone experiencing psychedelics use but also to the interaction with the environment and the trust with the therapist or guide.

One subject responding to an online questionnaire on ego dissolution from using psychedelics reported “forgetting that I was a male, a human, a being on Earth—all gone, just infinite sensations and visions,” while another stated, “I no longer felt human. I didn’t remember what a human was.” 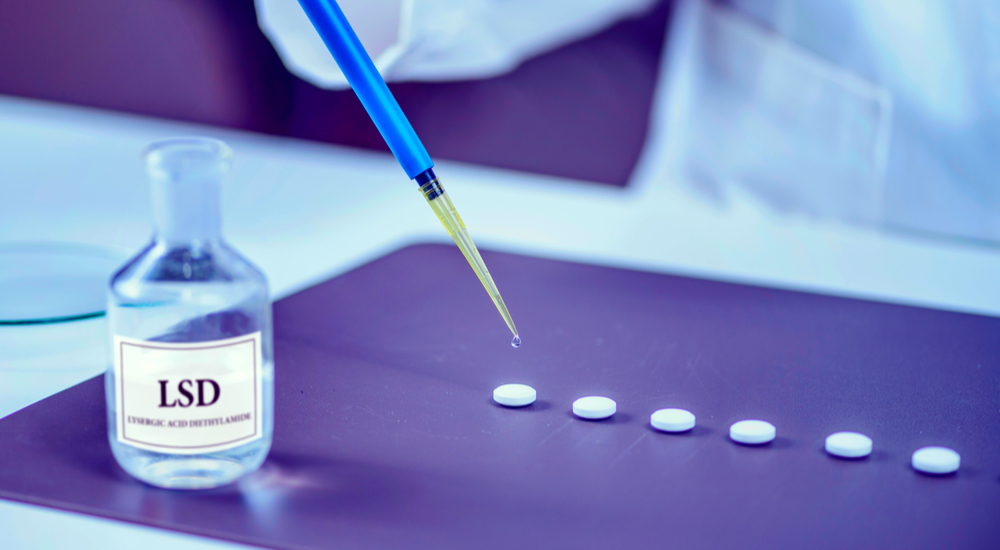 There is a sense among those seeking psychedelics for the first time that the experience will be essentially a sort of drug-induced meditative experience.

There are similarities. Both meditation and psychedelics can create a range of responses, from bliss and joy to fear and terror.

The difference is that meditation is a method of training different cognitive mechanisms related to mind wandering. The subjective effects of psychedelics are more complex and multifaceted than meditation. According to a study, including visual and auditory distortions and complex closed-eye “visions,” profound changes in emotions and mood, heightened sensitivity to internal and external context, and, at higher doses, dramatic alterations of self-consciousness known as drug-induced ego dissolution.

Johns Hopkins researchers seeking to learn more about why individuals use certain drugs published the results of its study on self-administered psychedelics psilocybin and DXM. Dextromethorphan (DXM) is a psychedelic found in cough syrups such as Robitussin, which has also been abused as a party drug. Users chug it to produce a psychedelic effect called “robotripping.”

The Johns Hopkins researchers found that people preferred Psilocybin over DXM. The study measured subjective effects such as visual effects, positive mood, insight, positive social effects, increased awareness of beauty (visual and music), awe/amazement, meaningfulness, and the mystical experience that would encourage the test subjects to try psilocybin again. “If DXM is a fuzzy black and white TV, psilocybin is high definition color virtual reality,” Roland Griffiths, working in Psychiatry and Behavioral Sciences at Johns Hopkins University School of Medicine, wrote about the results of the study.

But the profound experience of psychedelics can backfire, cause anxiety, paranoid thinking or loss of trust towards other people, depending on the dose administered, the personality traits of the person consuming it (set), or the environment in which it is taken (setting).

Researchers acknowledge these issues and say that there is some risk for long term psychoses from using psychedelics. They suggest safety guidelines for participants in their psychedelics trials, including volunteers with a personal or family history of psychotic disorders or other severe psychiatric disorders.

Trust and rapport between the session monitors and volunteers are established before the session, with careful volunteer preparation, a safe physical session environment, and interpersonal support from at least two study monitors during the session.

Researchers at the Liechti Lab at University Hospital in Basel, Switzerland, are working with MindMed (NEO: MMED) (OTCQB: MMEDF) (FRA: BGHM), a neuro-pharmaceutical company developing psychedelic medicines, to address concerns about the downside of the psychedelic experience. MindMed and Liechti Lab’s new clinical study titled “Effects of MDMA Co-administration on the Response to LSD in Healthy Subjects (LSD-MDMA)” will look to find out if a reliably euphoric experience from MDMA can produce an overall positive experience when combined with LSD. The study is expected to take around a year to complete.

President of MindMed, Dr. Miri Halperin Wernli, said in a press release that researchers are looking to “bring the participants outside the bounds of their everyday perceptions, bringing their mind into a very flexible state of mind facilitating new states of consciousness. This will provide the opportunity to step outside their usual sense of self and experience themselves from a radically different and new perspective.”

Researchers are also honing in on why someone could have a “bad trip,” reporting in a study with subjects taking psilocybin that it may be due to glutamate levels in the hippocampus. Glutamate is the most common neurotransmitter in the human brain. Changes in glutamate levels “induces behavioral changes during the psychedelic state,” the study concluded, which can be either positive or negative.

The bottom line is that more and more ordinary people who may have never considered such a thing are willing to try psychedelics. And there are more and more companies emerging to help them.

One is Field Trip Health, a company offering supervised in-clinic psychedelics experiences, using ketamine for psychotherapy. On their website, anyone can fill out a survey online about who they are and what they are looking for in their own mental health improvement efforts to see if they fit the criteria for psychedelics therapy.

The company also provides the first psychedelics application to help create a setting and provide journaling of the experience.

More science is being brought to bear, with more clinical trials about the effects and uses of psychedelics being wrapped up now or on the drawing board at the Usona Institute, WILD 5 Wellness, the Center for Psychedelic and Consciousness Research at Johns Hopkins, and others.

In an effort to widen the scope of psychedelics, a group of psychiatrists and psychedelics researchers are seeking more information about what people want and why through the Global Drug Survey 2020.

“It’s highly probable that as you read this, there are thousands of people, who outside of formal treatment settings and research trials, are currently engaging in some form of self-treatment with a range of psychedelic substances,” they wrote. “They outnumber those taking part in formal treatment trials with psychedelics by a huge margin. So, while we are not encouraging such use, it is happening, and we want to learn from it. Think how much experience is out there and how much we could learn. We’re asking for your help so we can learn more and share our findings with those who are running trials, navigating legislation and planning wider treatment access.”