LEAMINGTON, ON, Feb. 15, 2019 /PRNewswire/ – Aphria Inc. (“Aphria” or the “Company“) (TSX: APHA and NYSE: APHA) today announced that its Board of Directors (the “Board“) has accepted and considered the report of the special committee of independent directors (the “Special Committee“), which reviewed the allegations made against the Company in respect of the Company’s previously completed acquisition of LATAM Holdings Inc. (the “Acquisition“).

In accordance with its mandate announced on December 6, 2018, the Special Committee completed its review of the Acquisition with the assistance of independent legal advisor Lenczner Slaght Royce Smith Griffin LLP, independent forensic advisors Deloitte LLP and independent financial advisors Duff & Phelps Canada Limited. The Special Committee’s work included a review of the Company’s books and records and other documents, meetings with certain financial and legal advisors to the Company and, where available, certain members of senior management and directors of the Board.

The following is a summary of the principal findings of the Special Committee focused on the LATAM assets:

As a result, the Special Committee recommended areas of improvement to position Aphria as a leader in corporate governance and management practices, which the Board has unanimously agreed to adopt.  They include:

“The Board and I are grateful for the Special Committee’s diligence and independence in undertaking its review,” said Irwin D. Simon, Aphria’s independent Board Chair.  “The constructive conclusion to this long process has strengthened the Company.  Though I was not part of Aphria at the time of the LATAM acquisition, the Special Committee’s findings give me and the Board full confidence that it was executed at an acceptable value and is consistent with the Company’s international growth strategy.”

Added Simon, “With this behind us, we are committed to fully focus on our bright future and creating value for all Aphria shareholders.  Aphria is committed to the highest levels of governance and transparency, with a Board that, upon the appointment of a permanent CEO, will be fully composed of independent directors, from a majority previously.  I’m optimistic that the Special Committee’s further recommendations for improving our corporate governance will serve us well in the future.”

In addition, as part of its review of the Company’s operations, the Board affirmed that based on the most recent Health Canada inspection, Aphria’s Leamington facility and operations are in compliance with the requirements of the Cannabis Act and the cannabis products cultivated from this facility are produced in accordance with stringent quality assurance and quality control going beyond “Good Product Practices”.

As previously press released on January 11, 2019, Vic Neufeld and Cole Cacciavillani have completed a responsible transition plan and effective March 1, 2019 will be retiring from the Company (including in their capacity as directors).  Mr. Neufeld and Mr. Cacciavillani will continue to apply their knowledge and expertise as special advisors to both the Chair and Jakob Ripshtein, President.  Mr. Simon will be the interim Chief Executive Officer, working closely with Mr. Ripshtein, until the Board identifies a permanent CEO.  In addition, John Cervini will step down as a director of the Company effective as of March 1, 2019. Mr. Cervini will remain in a non-executive operational capacity within Aphria. The Nomination Committee is undertaking a process to identify suitable candidates to fill these vacancies on the Board. 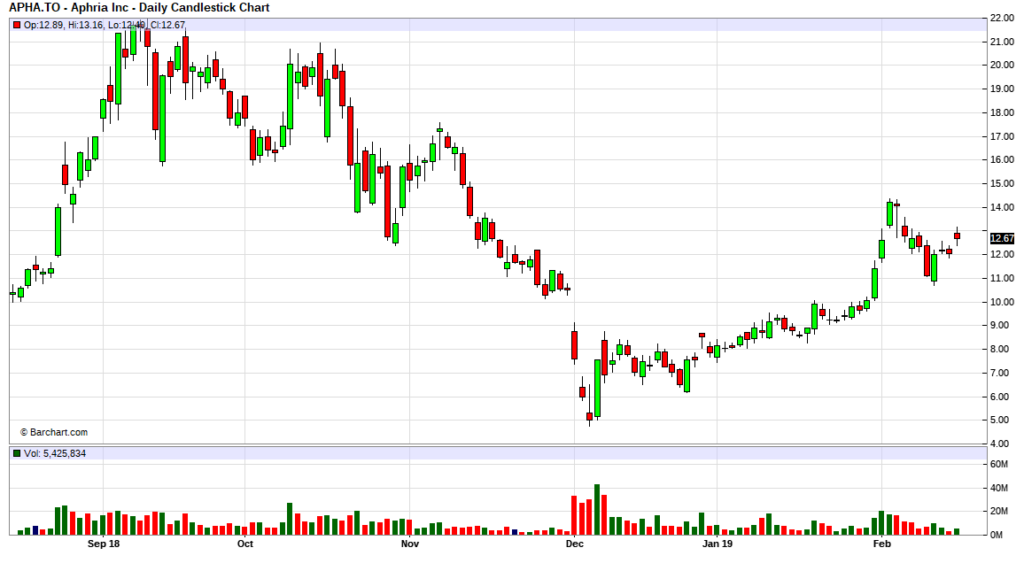