LEAMINGTON, ON, Feb. 6, 2019 /CNW/ – Aphria Inc. (“Aphria” or the “Company“) (TSX: APHA and NYSE: APHA) today announced that its Board of Directors (the “Board“) has rejected the hostile bid by Green Growth Brands Inc. (CSE:GGB) (“GGB“) to acquire all of the outstanding common shares of the Company (“Common Shares“) including any Common Shares that may become issued and outstanding after January 22, 2019, but prior to the expiry of the hostile bid upon the exercise, conversion or exchange of options, warrants, debentures or other securities of the Company exercisable or convertible into Common Shares, other than Common Shares owned by GGB or its affiliates, in exchange for 1.5714 shares of GGB (the “Hostile Bid“).

Based on the 20-day volume-weighted average price of GGB shares immediately before GGB’s announcement of an intention to acquire the Common Shares of the Company, the Hostile Bid reflects a 23% discount to the Company’s share price over the same period. The Board made its recommendation after careful consideration and receipt of the recommendation of a committee of its independent directors (the “Independent Committee“), who were advised by financial and legal advisors.

The Board unanimously recommends that Aphria shareholders REJECT the Hostile Bid and DO NOT TENDER their shares.

To REJECT the Hostile Bid, simply TAKE NO ACTION.

In the Board’s view, the Hostile Bid:

“The Aphria Board of Directors unanimously believes that GGB’s hostile offer is significantly undervalued and inadequate and not in the interest of Aphria shareholders on multiple grounds,” said Irwin D. Simon, Aphria’s independent Board Chair. “Regardless of their brazen attempts to suggest otherwise, GGB is asking Aphria shareholders to accept a substantial discount on their shares, as well as delisting from both the TSX and NYSE, resulting in a vast dilution of their ownership in Aphria. In return GGB offers shares in an illiquid company with limited operating history, minimal assets and no track record in the cannabis industry.  GGB clearly timed their offer to exploit recent lows for Aphria and cannabis stocks overall, with the goal of transferring value to the insiders who control GGB at the expense of Aphria shareholders.”

Simon continued, “Today, Aphria is in a better position than ever to create long-term value for our shareholders, following a positive second quarter and continued progress expanding our production capacity and global footprint. Over the past five years, we have built a strong foundation for a leading global cannabis company in cultivation, manufacturing, research and distribution infrastructure, as well as forging strategic investments and alliances to efficiently scale around the world.

“By virtue of our strong platform and competitive advantages, Aphria has multiple near-term opportunities to profitably grow and create substantial value for its shareholders. These include expanding production and automation to secure long-term cost and scale advantages, expanding in the global medical-use market in Europe, Latin America and the Caribbean, acquisition of increased market share in the Canadian adult-use markets, and developing new products for the burgeoning cannabis health and wellness sector. A hostile takeover by GGB ignores this bright outlook, which is another reason why the Aphria Board strongly urges shareholders to reject the bid.”

A copy of the Directors’ Circular, which sets forth in greater detail the Board’s recommendation and the reasons therefor, is being mailed to all Aphria shareholders and is available on Aphria’s website, SEDA,  and EDGAR.  These reasons include, but are not limited to, the following:

Shareholders are also encouraged to visit AphriaFuture.ca for additional reasons why the Hostile Bid should be rejected.

The Board has received a written opinion from its financial advisor, Scotiabank, to the effect that, as of February 5, 2019, and based on and subject to the assumptions, limitations and qualifications contained therein, the consideration offered under the Hostile Bid for the Common Shares is inadequate, from a financial point of view, to Aphria shareholders, other than GGB and its affiliates.

For the principal reasons outlined above, the Board has unanimously determined that the Hostile Bid is inadequate and significantly undervalues the Common Shares and is not in the best interests of Aphria, Aphria shareholders or its other stakeholders.

To REJECT the Hostile Bid, simply TAKE NO ACTION

If you have already tendered your Common Shares to the Hostile Bid, you can withdraw your Common Shares by contacting your broker or Laurel Hill Advisory Group, Aphria’s shareholder communications advisor and information agent at 1-877-452-7184 (toll-free for shareholders in North America) or 1-416-304-0211 (collect call for Aphria Shareholders outside North America) or via email at assistance@laurelhill.com. 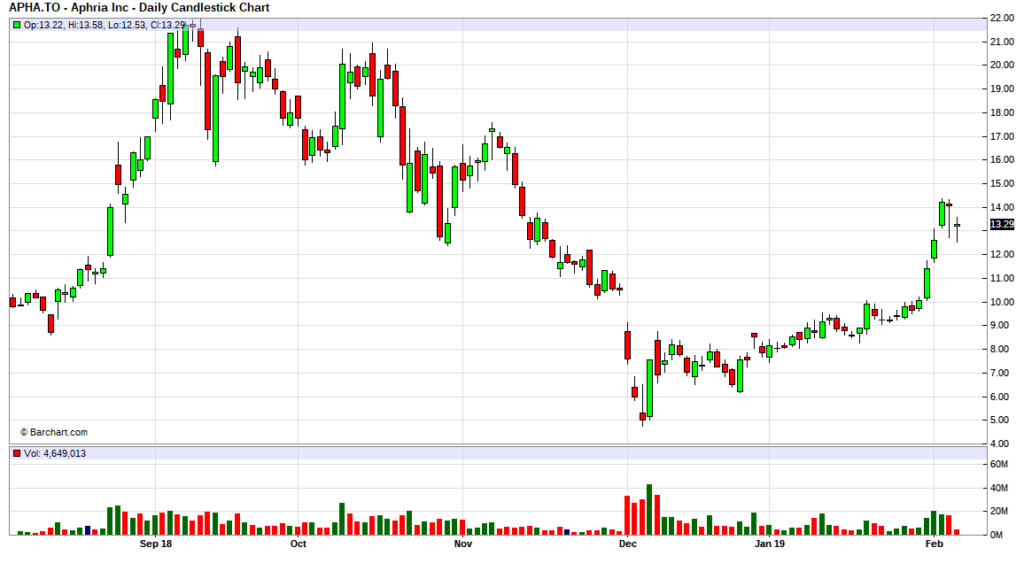