LEAMINGTON, ON, Jan. 11, 2019 /PRNewswire/ – Aphria Inc. (“Aphria” or the “Company“) (TSX: APHA and NYSE:APHA) today reported its results, for the second quarter ended November 30, 2018, and the decision by its Chief Executive Officer, Vic Neufeld, and Co-founder Cole Cacciavillani, to transition out of their executive roles over the coming months. Mr. Neufeld and Mr. Cacciavillani will remain in their current roles until such time. All amounts are expressed in thousands of Canadian dollars, unless otherwise noted and except for per gram, kilogram, kilogram equivalents, and per share amounts. 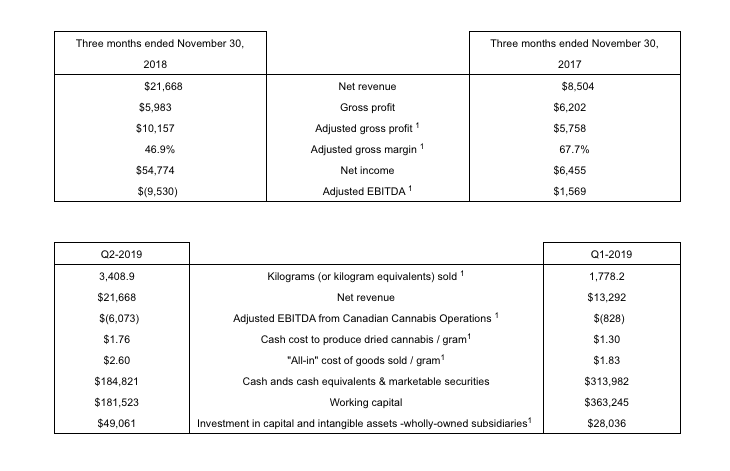 Aphria Chief Executive Officer Vic Neufeld, and Co-founder Cole Cacciavillani, are both nearing the end of their five-year journey with the Company and will transition out of their executive roles over the coming months but remain on the Board. Working closely with Irwin D. Simon, Aphria’s recently appointed independent Chair, and President Jakob Ripshtein, Mr. Neufeld and Mr. Cacciavillani intend to complete a smooth and responsible transition to a globally-minded executive leadership team for the long-term benefit of the Company’s patients, shareholders, customers, and employees.

Aphria Chair Irwin D. Simon commented, “Vic and Cole are consummate entrepreneurs. Thanks to their vision, energy and passion, Aphria has become a global player in an industry that didn’t even exist five years ago. On behalf of the entire Aphria team, I want to express my gratitude to both. I look forward to working with them to further build Aphria’s leadership team and continue driving long-term value for our patients, customers and employees into the future.”

“When the Canadian medical cannabis market opened up five years ago, Cole was growing millions of potted flowers in Leamington, and he understood that cannabis was a natural product extension for the founding team’s decades of experience as greenhouse growers in Leamington,” said Mr. Neufeld. “Now with legalization and globalization, including a huge market opportunity with positive developments in the U.S., Aphria’s next generation of leadership may take the reins. Building and leading a Company like Aphria, which exploded from an idea in late 2013 to our many successes to-date, has been an incredible journey, despite the toll it has taken on health, family and personal priorities.”

“Vic and I have worked tirelessly for decades, building great businesses, but now in our sixties, it is time for both of us to step back from the demands of leading a world-class organization. Endless meetings, travel, deadlines, talent search – the list of executive responsibilities will only continue to grow,” said Mr. Cacciavillani.

“Succession is the plan. Cole and I have informed the Board, and they have agreed, that we will begin the transition process immediately, and at the appropriate time, we will both step down from executive positions at Aphria. We continue to have the greatest pride in what Aphria has achieved, and its future has never looked brighter. From continued technology advancements, to continued support of scientific developments, to amazing adult-use brands, to globalization strategies, and most of all, the hundreds of dedicated passionate team members that have joined Aphria, we are well positioned to be a dominant player,” concluded Mr. Neufeld.

The Board has requested that, following the transition, Mr. Neufeld and Mr. Cacciavillani continue to apply their knowledge and expertise as special advisors to both the Chair and the President, ensuring a smooth transition of institutional experience and strategic advice until a new CEO is appointed.

“This is the first quarter to partially include adult-use sales, helping to drive 63% quarter-over-quarter net revenue growth, as did continued strength in sales to the medical-use market. As expected, gross margins declined, reflecting lower effective selling prices in the adult-use market, as well as temporarily lower yields and higher production costs in the quarter as we moved aggressively to build out production facilities and implement new automation processes.

“A top priority for Aphria is expanding production and automation to secure our long-term cost and scale advantages. The Part IV and V expansions of Aphria One are now complete and awaiting Health Canada approval, while an application for a cultivation licence at Aphria Diamond has been submitted and is awaiting pre-cultivation inspection. Based on this, we now expect to generate first sales from these new facilities later in the calendar year, pending Health Canada approvals, with our annualized harvest reaching 255,000 kilograms, compared to 35,000 kilograms currently, by the end of calendar 2019.

“In the second quarter we also positioned the Company for long-term growth in key global markets with strategic alliances, targeted investments and disciplined acquisitions. We’re excited to have just closed the previously announced acquisition of CC Pharma, based in Germany, which distributes pharmaceuticals and medical cannabis to over 13,000 pharmacies. This transaction positions Aphria to be a leading player in the European medical cannabis market. We’re equally optimistic about our recently announced alliances and acquisitions of highly strategic licenses and operations in Latin America and the Caribbean’s most attractive emerging cannabis markets, including Colombia, Argentina, Paraguay and Jamaica.

“A strong foundation is critical to sustaining Aphria’s leadership in the global cannabis market and delivering long-term profitable growth. To that end, we finished the quarter with a strong balance sheet and sufficient capital to fund our previously announced plans internationally,’ said Mr. Neufeld.

Selling, general and administrative costs (“SG&A“) in the quarter rose to $27.5 million, from $24.1 million in the prior quarter and $7.3 million in the prior year, primarily due to higher headcount and employee-related costs, following the acquisitions of Nuuvera Inc. and LATAM Holdings, and as a result of investing $2.6 million in brand development prior to the implementation of The Cannabis Act. As a percent of net revenue, SG&A declined to 127% from 181% in the prior quarter, reflecting improved operating leverage on the Company’s growing revenue base.

Net income for the second quarter of 2019 was $54.8 million or $0.22 per share, compared to $21.2 million or $0.09 per share in the previous period, and $6.5 million or $0.05 per share for the same period last year. The increase in net income relates to gains on our long-term investment portfolio, primarily our divestitures of positions in Hiku Brands and Liberty Health Sciences.

The Company invites you to join Vic Neufeld, Chief Executive Officer and Carl Merton, Chief Financial Officer, on its analyst conference call this morning at 9:00 am EST to discuss its financial results for the quarter-ended ended November 30, 2018. An audio replay of this call will be available by 11:45 am ET from January 11, 2019 through February 11, 2019.

We Have A Good Thing Growing.

1 – In this press release, reference is made to adjusted gross profit, adjusted gross margin, adjusted EBITDA from Canadian cannabis operations, adjusted EBTIDA loss from Canadian cannabis operations, kilogram (or kilogram equivalents) sold, cash costs to produce dried cannabis per gram, “all-in” costs to produce dried cannabis per gram and investments in capital and intangible assets – wholly-owned subsidiaries, which are not measures of financial performance under International Financial Reporting Standards. Definitions for all terms above can be found in the Company’s November 30, 2018 Management’s Discussion and Analysis, filed on SEDAR and EDGAR.

CAUTIONARY NOTE REGARDING FORWARD-LOOKING STATEMENTS: Certain information in this news release constitutes forward-looking statements under applicable securities laws. Any statements that are contained in this news release that are not statements of historical fact may be deemed to be forward-looking statements. Forward looking statements are often identified by terms such as “may”, “should”, “anticipate”, “expect”, “potential”, “believe”, “intend” or the negative of these terms and similar expressions. Forward-looking statements in this news release include, but are not limited to, statements with respect to internal expectations, estimated margins, expectations with respect to actual production volumes, expectations for future growing capacity and costs, the completion of any capital project or expansions, and expectations with respect to future production costs, and expectations related to the timing to generate sales from new facilities. Forward-looking statements necessarily involve known and unknown risks, including, without limitation, risks associated with general economic conditions; adverse industry events; marketing costs; loss of markets; future legislative and regulatory developments involving cannabis; inability to access sufficient capital from internal and external sources, and/or inability to access sufficient capital on favourable terms; the cannabis industry in Canada generally, income tax and regulatory matters; the ability of Aphria to implement its business strategies; competition; crop failure; currency and interest rate fluctuations and other risks.

Readers are cautioned that the foregoing list is not exhaustive. Readers are further cautioned not to place undue reliance on forward-looking statements as there can be no assurance that the plans, intentions or expectations upon which they are placed will occur. Such information, although considered reasonable by management at the time of preparation, may prove to be incorrect and actual results may differ materially from those anticipated.

Forward-looking statements contained in this news release are expressly qualified by this cautionary statement.