Aphria Announces Pricing of US$300 Million of Convertible Senior Notes

LEAMINGTON, ON, April 17, 2019 – Aphria Inc. (“Aphria” or the “Company“) (TSX: APHA and NYSE: APHA) today announced the pricing of US$300 million aggregate principal amount of 5.25% convertible senior notes due 2024 (the “notes”) in a private placement to qualified institutional buyers pursuant to Rule 144A under the U.S. Securities Act of 1933, as amended (the “Act”), and outside the United States to non-U.S. persons in compliance with Regulation S under the Act. Aphria also granted the initial purchasers of the notes an option, exercisable within a 30-day period, to purchase up to an additional US$50 million aggregate principal amount of notes. The sale of the notes to the initial purchasers is expected to settle on April 23, 2019, subject to the satisfaction of customary closing conditions.

Aphria intends to use the net proceeds from this offering to support its international expansion initiatives, for future acquisitions and for general corporate purposes, including working capital requirements, in jurisdictions where federally and nationally legal.

The notes will be senior unsecured obligations of Aphria and will accrue interest at a rate of 5.25% per year, payable semiannually in arrears on June 1 and December 1 of each year, beginning on December 1, 2019. The notes will mature on June 1, 2024, unless earlier repurchased, redeemed or converted.

Holders may require Aphria to repurchase their notes upon the occurrence of a “fundamental change” (as defined in the indenture governing the notes) at a cash repurchase price equal to 100% of the principal amount of the notes to be repurchased, plus accrued and unpaid interest to, but excluding the repurchase date.

Aphria may not redeem the notes prior to June 6, 2022, except upon the occurrence of certain tax-related events. On or after June 6, 2022, Aphria may redeem for cash all or part of the notes if the last reported sale price of Aphria’s common shares has been at least 130% of the conversion price then in effect for at least 20 trading days (whether or not consecutive) during any 30 consecutive trading day period (including the last trading day of such period) ending on, and including, the trading day immediately preceding the date on which Aphria provides a notice of redemption. Aphria may also redeem for cash all but not part of the notes, at Aphria’s option, subject to certain conditions, upon the occurrence of certain tax-related events. Redemptions of notes, in either case, shall be at a redemption price equal to 100% of the principal amount of the notes to be redeemed, plus accrued and unpaid interest to, but excluding the redemption date.  In addition, following certain “make-whole fundamental changes” (as defined in the indenture governing the notes) occurring prior to the maturity date of the notes or upon the Aphria’s issuance of a notice of redemption, Aphria will increase the conversion rate for holders of the notes who elect to convert their notes in connection with that make-whole fundamental change or during the related redemption period.

The offer and sale of the notes and any common shares of Aphria issuable upon conversion of the notes have not been registered under the Act or any state securities laws, or qualified for distribution by prospectus in Canada, and may not be offered or sold in the United States absent registration or an applicable exemption from such registration requirements, or sold in Canada absent an exemption from the prospectus requirements of Canadian securities laws.

CAUTIONARY NOTE REGARDING FORWARD-LOOKING STATEMENTS: Certain information in this news release constitutes forward-looking statements under applicable securities laws. Any statements that are contained in this news release that are not statements of historical fact may be deemed to be forward-looking statements. Forward-looking statements are often identified by terms such as “may”, “should”, “anticipate”, “expect”, “potential”, “believe”, “intend” or the negative of these terms and similar expressions. Forward-looking statements in this news release include, but are not limited to, statements regarding the satisfaction of customary closing conditions with respect to the offering of the notes, prevailing market conditions, the anticipated use of net proceeds of the offering of the notes, which could change as a result of market conditions or for other reasons, and the impact of general economic, industry or political conditions in the United States, Canada or internationally. Forward-looking statements necessarily involve known and unknown risks, including, without limitation, risks associated with general economic conditions; adverse industry events; marketing costs; loss of markets; future legislative and regulatory developments involving cannabis; inability to access sufficient capital from internal and external sources, and/or inability to access sufficient capital on favourable terms; the cannabis industry in Canada generally, income tax and regulatory matters; the ability of Aphria to implement its business strategies; competition; crop failure; currency and interest rate fluctuations and other risks identified in the Company’s public filings on SEDAR and EDGAR.

Readers are cautioned that the foregoing list is not exhaustive. Readers are further cautioned not to place undue reliance on forward-looking statements as there can be no assurance that the plans, intentions or expectations upon which they are placed will occur. Such information, although considered reasonable by management at the time of preparation, may prove to be incorrect and actual results may differ materially from those anticipated.

Forward-looking statements contained in this news release are expressly qualified by this cautionary statement. 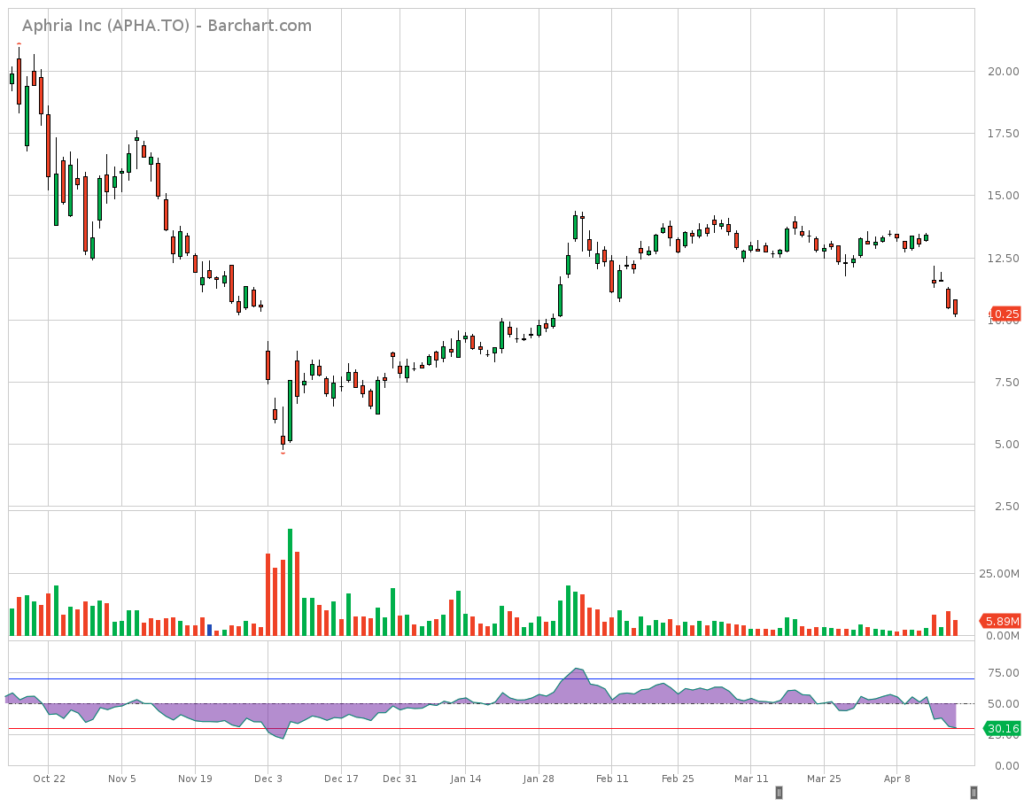 Create your own APHA technical and interactive chart – Barchart