Adapt or Die: Phase 2 of The Cannabis Boom Will Likely Be Led By Mergers and Acquisitions - The Cannabis Investor

Adapt or Die: Phase 2 of The Cannabis Boom Will Likely Be Led By Mergers and Acquisitions

News broke recently of a tie-up that shows the medical cannabis industry in a new light: it is a market where more mature players both gain opportunity and give it back to investors in high-potential smaller companies that could benefit from additional power. The merger hitting headlines sees Aleafia Health, Inc. (TSXV: ALEF) (OTCQX: ALEAF) pairing with Emblem Corp. (TSXV: EMC) (OTCQX: EMMBF).

Aleafia announced in late December that it would acquire Emblem for a 27% premium over its share price at the time. More accurately, every share of Emblem is to be purchased with 0.8337 shares of Aleafia— meaning the more Aleafia’s share price climbs, the better the Emblem Shareholders do on the deal.

It’s a strong play by Aleafia and one that fits the company’s trend of making savvy moves to add to its own ability to deliver excellent products and services to customers and returns to investors.

Aleafia has proven that they can create value with an acquisition strategy as they did with Canabo Medical Clinic. The synergies from that deal in Q1 2018 have come to life in the form of strong outperformance of Aleafia’s stock compared to industry peers. In that case, Canabo gave Aleafia an edge in the realm of research, and it ushered in a new phase of corporate development that led to logical next steps like this acquisition of Emblem.

Emblem pursued a strategy of going it alone and gave Investors severe investing losses to show for it. Over the past 2 years Emblem has lost 70% of its value while Aleafia shares have rocketed by 133%– that’s a 203% underperformance. Something funny Investors should note is that during the same time-frame Canada’s largest companies in the S&P/TSX index have mostly seen losses.

Those against the merger seem to report the only reason is that the offer is too low, because they bought it at a higher price in the IPO. The IPO price Is irrelevant– isn’t a liquid, transparent market the determinant of what the price is? What ALEF has offered, and more? There’s no room for confirmation bias in investing, that’s a sure fire way to lose money.  Emblem’s long-term chart looks to be on a path to lower prices without a rescue. Aleafia could be just what the doctor ordered for this promising but underperforming medical cannabis innovator. 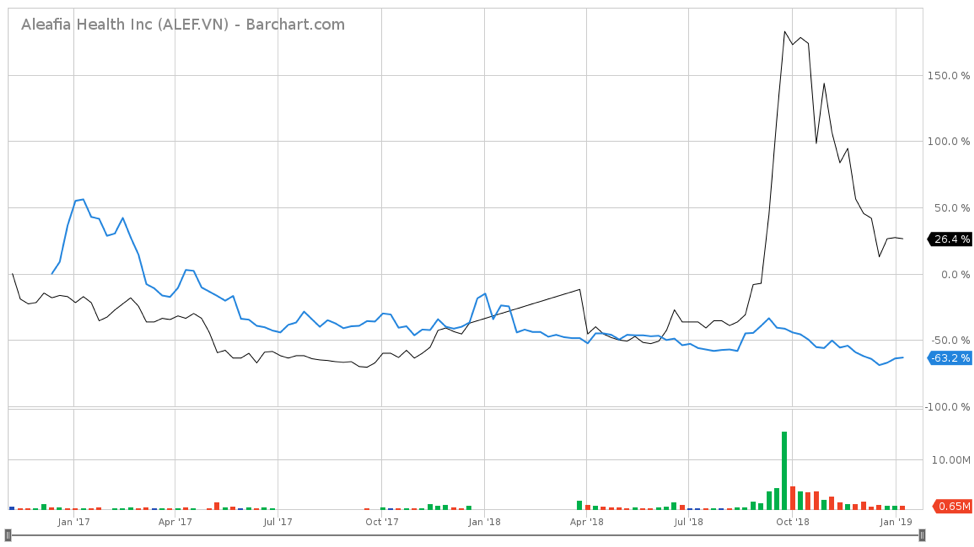 More Than the Sum of Its Parts

The goal of any merger is to establish a new entity that is more valuable than the two original companies would have been when just added together.

Based on Aleafia’s track record of M&A value creation with Canabo, the perfect synergies of these two operators, resulting top 5 operator status and the obvious potential cost savings to operate as one firm, Emblem shareholders would be foolish to not take the opportunity to join up with Aleafia.

By acquiring Emblem, Aleafia in turn gains access to cash, high-value supplier agreements, a product innovation pipeline, and reach deeper into Canadian distribution channels as well as the burgeoning Australian and German markets.

Benefits from Both Directions

Since 2008, mid-cap stocks have fared well, enjoying growth rates that surpass big-cap companies and carrying the spirit and agility to take on smaller companies that make them stronger. As a consequence, the mid-cap guys get more appetizing to big companies inside and outside the cannabis world. We know these stories, from Canopy Growth Corp (TSX: WEED) (NYSE: CGC) pulling in Constellation Brands, Inc. (NYSE: STZ) to the newly announced Tilray (NASDAQ: TLRY) and Authentic Brands Group (NYSE: ABG) distribution deal. The opportunities are strong and the companies are varied in size. Investors who keep their eyes open along the spectrum of maturity are sure to benefit as smart executives pursue growth organically and through acquisition.

Moving Forward, will M&A start to heat up?

Cash-rich names like Canopy Growth (TSX: WEED; NYSE: CGC) and The Green Organic Dutchman Holdings (TSX: TGOD) (OTCQX: TGODF) may look to the landscape for potential targets that are struggling like Emblem was– Namaste Technologies (TSXV: N) would be at the top of that list. Or would-be acquirers may look to medium-sized players like The Supreme Cannabis Company (TSXV: FIRE; OTCQX: SPRWF) and Organigram Holdings (TSXV: OGI) (OTCQX: OGRMF) to merge with in order to jump up in the production rankings.