NEW YORK, April 18, 2019 — Acreage Holdings, Inc. (“Acreage”) (CSE: ACRG.U) (OTCQX: ACRGF) (FSE: 0ZV) announced that on April 17, its subsidiary, High Street Capital Partners, LLC entered into an agreement to acquire 100% of Deep Roots Medical LLC (“Deep Roots”), a vertically integrated cannabis operator in Nevada, for a total deal value of $120 million to be paid in common units and cash. Deep Roots marks Acreage’s entry into Nevada, increasing the company’s total state footprint to 20 (including pending acquisitions) – the largest in the US cannabis industry.  With a population of three million, and tourism that attracts 43 million visitors per year, Nevada is estimated to generate nearly $800 million in legal cannabis sales by 2022, according to Arcview Market Research.

Kevin Murphy, Founder, Chairman, and Chief Executive Officer of Acreage Holdings, Inc., commented, “We continue to deliver on our shareholder commitments to aggressively expand our presence in the West.  We could not be more excited for what we believe will become a leading operation in the state of Nevada, one of the most important states in the cannabis industry.”

Manufacturing & Processing: Housed in the same 40,000 SF building in Mesquite, Deep Roots has a manufacturing facility and a butane extraction lab to produce their distillates and edibles.  The facility has ample space to build a Form Factory to expand its own internal house of brands throughout Nevada as well as other third-party brands it has agreements with.

Wholesale and distribution business: Deep Roots currently sells and distributes its Deep Roots, Chillers, Bluebirds, and Helix Twist branded products, and other third-party brands, into nearly 80% of the retail dispensaries in Nevada, making it one of the most connected wholesale operations in the state.

Retail Dispensary operations: Deep Roots has licenses to operate seven retail dispensaries, one of which is currently in operation, another is under construction, and five additional locations that are currently in development. Of the five remaining licenses to be developed, four are in the greater Las Vegas area and the fifth is in Reno.

Deal Terms:  The total deal is valued at $120 million, including $100 million in common units of High Street Capital Partners, LLC and $20 million in cash.  High Street Capital Partners, LLC will issue up to 4,761,905 common units at a deemed value of $21.00 per unit.  Certain Deep Roots employees will have a portion of their issued common units be subject to a lock-up schedule.  The deal is expected to close in the second quarter of 2019.

Headquartered in New York City, Acreage is the largest vertically integrated, multi-state owner of cannabis licenses and assets in the U.S. with respect to the number of states with cannabis-related licenses, according to publicly available information.  Acreage owns licenses to operate or has management services agreements with license holders to assist in operations of cannabis facilities  in 20 states (including pending acquisitions) with a population of approximately 180 million Americans, and an estimated 2022 total addressable market of more than $17 billion in legal cannabis sales, according to Arcview Market Research.  Acreage is dedicated to building and scaling operations to create a seamless, consumer-focused branded cannabis experience.  Acreage’s national retail store brand, The Botanist, debuted in 2018. 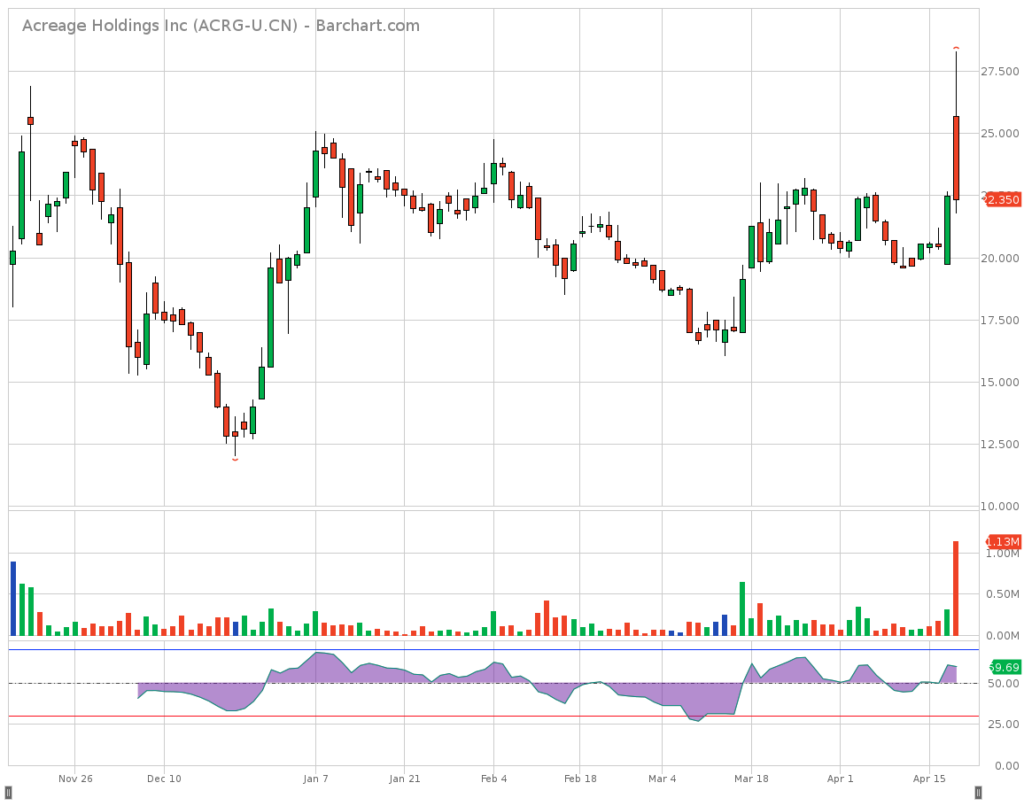 Create your own ACRG.U technical and interactive chart – Barchart

Technical Analysis for ACRG.U by TradingView