Cannabis stocks are off to a mixed start in 2020 but despite the volatility, a lot has happened since the beginning of the new year. This past Friday, Canada’s largest licensed producer (LP) Canopy Growth (TSX: WEED) (NYSE: CGC) (FRA: 11L1) surprised the market in a good way after the company announced its Q3 fiscal 2020 earnings.

Canopy reported a 62% jump in net revenue which came in at $123.8 million easily beating the street’s projection of $105 million thanks to the company’s 140 new cannabis retail stores that opened in the quarter. Canopy also beat Wall Street‘s net loss forecast of negative $0.52 per share after posting a much improved net loss of $124 million or $0.38 per share. Shares of WEED stock soared as much as 20% on Friday which in turn lifted cannabis stocks across the board.

“As we noted in our 4Q19 earnings note, we described our prediction that ‘The Worst is Over’ for OGI. With these 1Q20 results, we reaffirm this prediction,” said Sarugaser.

A few days ago, Bruce Campbell, founder and portfolio manager of StoneCastle Investment also weighed in on Organigram calling OGI “one of the better names in the space.” Campbell believes investors should be watching OGI’s sales figures in Canada’s new Cannabis 2.0 market over the coming quarters.

“If you look at what Organigram has done, they’ve been very good at executing. They have a great production facility as far as producing the cannabis at a fairly low price with some unique technology —they have this three-stack system— but now they’ve moved into some of the 2.0 products, and of the 2.0 products they’re selling, one of them is chocolate, which is apparently just ramping up now,” said Campbell.

South of the border, U.S. multi-state operator (MSO) Curaleaf Holdings (CSE: CURA) (OTCQX: CURLF) received big news last week after it was reported that the U.S. DOJ’s HSR waiting period in regards to the company’s Grassroots acquisition had lapsed. Curaleaf now has the green light to proceed with the deal under U.S. antitrust laws. Once closed, the acquisition of Grassroots will make Curaleaf the largest cannabis company in the world. 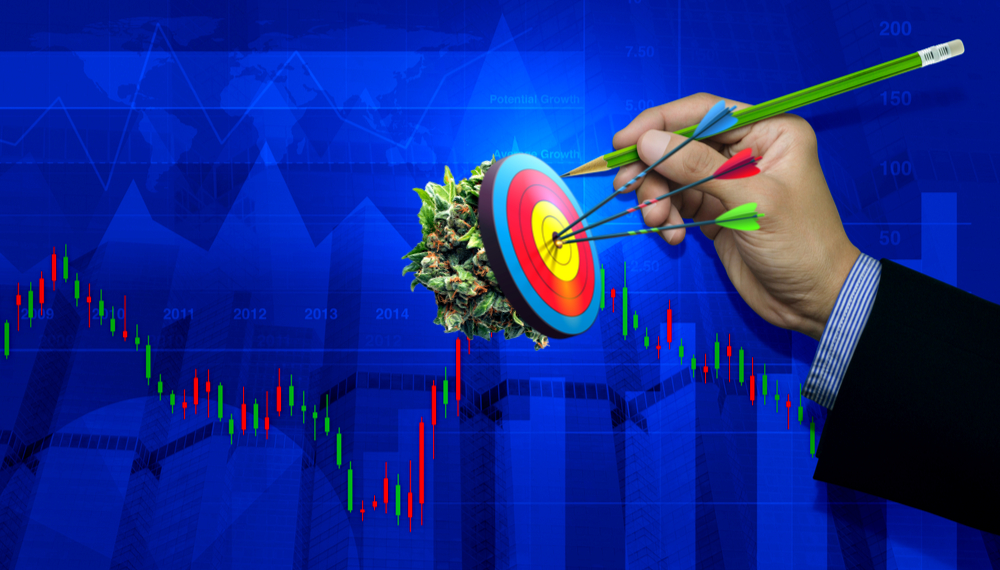 In light of all the recent developments in the cannabis sector over the past two weeks, multiple analysts have released new research updates on the following 7 North American cannabis stocks including updated ratings and price targets.

“Revenue exceeded our expectations of $110.5M while the EBITDA loss was larger than our estimate of $64.1M. The better than expected results were due to the over-performance of medical sales and ‘other’ revenue. Kilograms of medical cannabis sold in Q3 were 2,257kg, a yoy increase of 24% – this marks the end of four consecutive quarters of yoy declines. The ‘other’ revenue line item was $33.4M, up 41% or $9.8M due to strong performance of previously acquired Storz & Bickel, This Works (CBD) and Biosteel Sports Nutrition.”

“The rating cut is due to the recent increase in the share price which was greater than our target increase. Our target is 13x our FY21 P/Sales estimate>”

“Overall, we view the results as neutral to our investment thesis. Aurora maintained its guidance, provided earlier on February 6th, 2020. Aurora expects revenue to be ~$65 million for Q3/FY20e (ending March 31, 2020), which is broadly flat relative to revenue in Q2/FY20, before considering provisions for price reductions and product returns. Aurora anticipates it will generate positive EBITDA primarily by controlling operating expenses.”

“CURA now trades at 5.5x our F2021 EBITDA forecast, representing a 28 percent discount to the 7.7x average for US operating cannabis companies. [Recent] media reports suggesting that closing was imminent helped the stock back above the accelerated uptrend, and momentum continues to be strong. Potential catalysts include the Q4/19 results, closing of the Grassroots and ATG transactions, and additional M&A.”

“Clearly, Trulieve is doing something right in Florida so we travelled to Tallahassee to get an update on the company.”

“We believe management has effectively anticipated market changes in the past and quickly executed (smokable flower for instance). We believe that the next phase in the Florida market will likely be the introduction of edibles which TRUL is currently prepared to commence manufacturing for this product category. Lastly, TRUL’s rapid expansion of its retail footprint has left its competition in its rearview mirror. Although we expect its competition to build more dispensaries within this lucrative market, TRUL’s first moving advantage will likely enable it to secure the best locations and build long-term brand awareness.”

“Historically, we believe FIRE has pivoted its approach in several operational areas (facility build, sales channel focus, out- versus in-source extraction), in our view possibly signalling some challenges for the company to optimize its overall strategic direction. This combined with a management team in transition and shifts in product strategy injects new uncertainty into FIRE’s outlook, prompting us to take a more cautious approach with our forecasts, driving our lower valuation.”

“We believe the most likely scenarios are as follows. The Company may attempt to renegotiate conversion price of the debentures to a level that is lower than $1.20/shr, dependent on the market at that time; Look to pay down the maturing debentures with proceeds from the issuance of new securities, preferably secured debt (assuming sufficient capital is available at reasonable terms); or Alimentation Couche Tard and the Company may decide to mutually agree on the early conversion of the
Couche Tard debentures, allowing Couche Tard to exercise its Tranche A Warrants, for proceeds of $42.9 million, which the Company may then use in part to repay the debentures.”

“While quite speculative, we also note the possibility that Couche Tard electing to convert its debentures and exercise its Tranche A warrants ahead of the maturity date for the June 2020 convertible debentures could see the stock reprice meaningfully higher (Tranche A warrants are exercised at $1.40), which could put the June 2020 convertible instruments in the money.

“Even companies who have obtained excellent distribution, growth sales with a strong gross margin, such as Harmony Hemp (50 per cent-plus gross margin), are capital constrained. With ~$22 million in cash, ABCS is in an excellent position to capitalize on such opportunities. Even though we believe the shares of ABCS are incredibly undervalued, it still trades at a 100 percent premium (5x FY19 sales) to the value at which it just purchased Harmony (2.5x sales).”

“Even with over 12,000 retail locations (not including the professional channel for CBDCLINIC), we believe there is still significant room within the F/D/M channel [for Abacus. We note that just expanding within its existing clients’ stores could grow its footprint to ~60,000. With such potential, ABCS is set to be THE leader within the CBD market, yet its market cap is still sub-$100 million or less than 1.5x our FY20 sales forecast.”

TransCanna is Rapidly Becoming a Leader in the California Cannabis Industry