Now That the Democrats Have Put the Finishing Touches on the Blue Wave, Many Believe Serious Federal Marijuana Reform Could Happen in 2021 and the Bullish Sentiment Has the Cannabis Sector Soaring

While it’s True, a Rising Tide Lifts All Boats; We Believe Red White & Bloom, Curaleaf, Green Thumb Industries and Trulieve Are Uniquely Positioned to Outperform the Cannabis Sector in a Big Way

The January 5th Senate Runoff Elections saw the Democratic Party officially seize control of the U.S. Senate and, as a result, put the finishing touches on the Blue Wave. The Democrats will soon control all three branches of the U.S. federal government making serious federal cannabis reform in 2021 a strong possibility.

As expected, cannabis investors have reacted swiftly to the news, with massive retail and institutional capital flooding into the sector. Cannabis stocks as a group have begun 2021 on an absolute tear. Still, as we saw with the 2018 Canadian Cannabis Boom, the hype will eventually fade, and the winners will separate themselves from the losers.

Investors would be wise to position now in these four leading U.S. Multi-State Operators (MSOs) to give themselves the best chance to earn the maximum return on investment as the U.S. Cannabis Boom will almost certainly dwarf the 2018 Canadian bull run.

Of the four pot stocks mentioned in this article, Red White & Bloom (CSE: RWB) (OTCQX: RWBYF) arguably has the most upside of the group because RWB stock just began its rise, while Curaleaf (CSE: CURA) (OTCQX: CURLF), Green Thumb (CSE: GTII) (OTCQX: GTBIF) (FRA: R9U2) and Trulieve (CSE: TRUL) (OTCQX: TCNNF) have all been trading at or near their 52-week highs for months.

Red White & Bloom is positioning itself to be a top-three Multi-State Operator (MSO) in the budding legal American cannabis and hemp sector. RWB’s operations and investments are predominately focused on major U.S. markets, including Michigan, Illinois, Massachusetts, Arizona and California.

In mid-September 2020, RWB closed its blockbuster acquisition of cannabis powerhouse Platinum Vape (PV), which currently has its full line of premium cannabis products in over 750 retail locations throughout Michigan, California, Oklahoma and soon Arizona.

Red White & Bloom also holds an investment in PharmaCo, a leading Michigan cannabis player. RWB announced in late July 2020 that it exercised a call option to acquire PharmaCo. The PharmaCo deal is pending regulatory approval and could close in a matter of weeks. PV and PharmaCo are both generating substantial revenue, and many expect RWB’s Q4 results to be a game-changer for the company and its shareholders. 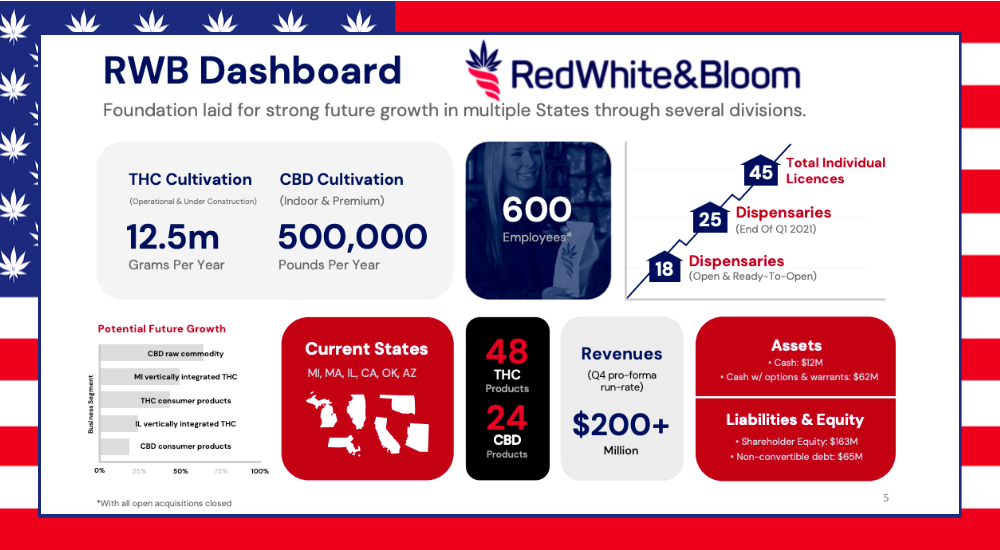 RWB also has an exclusive deal in place with High Times, allowing the company to brand dispensaries and manufacture and sell cannabis products under the most legendary name in cannabis. RWB recently announced its phase one roll-out of High Times branded cannabis products in Michigan and the company holds the Illinois and Florida markets’ rights.

On Monday, shares of Red White & Bloom’s CSE listed RWB stock experienced a massive breakout from its Bull Flag chart formation, rising +27.91% to close the day at $1.10 per share. Shares of the company’s American listed RWBYF stock soared +27.2% to close Monday’s trading session at $0.86. Look for RWB stock to keep rising throughout 2021 as it continues to close the large valuation gap that currently exists between it and its peers CURA, GTII and TRUL.

Massachusetts-based Curaleaf is the largest U.S. Multi-State Operator at the moment. The company currently has operations in 23 states and owns a total of 96 dispensaries, 23 cultivation sites, 30 processing sites and has a total cultivation capacity of over 2 million sq ft. Curaleaf’s operations are focused on highly populated markets that have a limited amount of state licenses such as Massachusetts, Florida, Arizona, Illinois, Pennsylvania, New Jersey and New York. The company says its mission is to improve lives by providing clarity around cannabis and confidence around consumption. Curaleaf’s website states: “as a vertically integrated, high-growth cannabis operator known for quality, expertise and reliability, the company and its brands, including Curaleaf and Select, provide industry-leading service, product selection and accessibility across the medical and adult-use markets.”

Green Thumb Industries (GTI) is another leading U.S. MSO that describes itself as a national cannabis consumer packaged goods company and retailer that promotes well-being through the power of cannabis while giving back to the communities in which it serves. GTI manufactures and distributes a portfolio of branded cannabis products, including Beboe, Dogwalkers, Dr. Solomon’s, Incredibles, Rythm and The Feel Collection. The company also owns and operates two national retail cannabis stores chains by the name of “Rise” and “Essence.” GTI is headquartered in Chicago, Illinois and the company currently has operations in 12 states with a total of 51 open stores, 13 manufacturing facilities and 97 retail store licenses. GTI was established in 2014 and now employs more than 1,800 people. In 2018 and 2019, the company was named as a “Best Workplace” by Crain’s Chicago Business and MG Retailer magazine.

Trulieve is the clear-cut leader in the Florida cannabis market boasting a dominant 51% market share in the Sunshine State. The company’s product line now consists of over 501+ SKUs and is constantly growing. Trulieve says its first-mover advantage in Florida has provided the company with substantial brand recognition and media attention. Trulieve now has 66 stores in Florida and 71 nationwide. Founded in 2015, Trulieve now operates a total of 75 retail stores in six states and boasts an impressive 1.9 million sq ft cultivation space. The company, which has been profitable since 2017, currently employs over 4,700 people.

Trending: World’s First Psychedelics ETF is on the Horizon, Here Are 4 Psychedelic Stocks Certain to Be in the ETF’s Portfolio