The 3 Hottest Stocks For The 2018 Marijuana Frenzy

In the past three months alone, the North American Marijuana Index has soared by about 24 percent indicating investors’ insatiable appetite for a piece of this booming industry. If you happen to have missed out on this rally, here is why you shouldn’t be too worried. 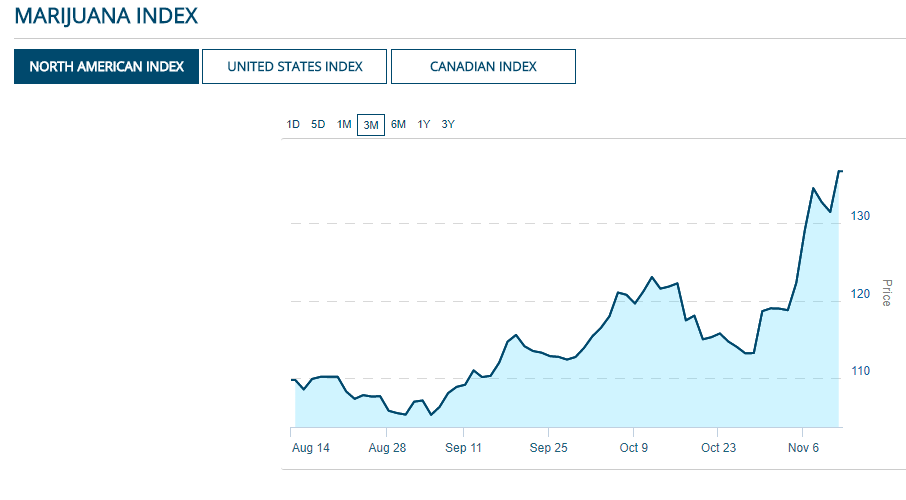 According to the most recent research from Ameri Research, the legal marijuana market was worth $14.3 billion in 2016 and is expected to grow to $63.5 billion by the year 2024, representing a CAGR of 21.1 percent.

Thanks to this impressive growth forecast coupled with record levels of support from the public, there has been an explosion in the number of marijuana startups in the past couple of years. Pew Research estimates that more than 70 percent of the U.S population supports legalizing cannabis with 73 percent of millennials supporting legalization.

Furthermore, an increasingly favorable regulatory environment on the state level continues to play a key role in bolstering the broader marijuana sector. Last week, Forbes reported how marijuana was the biggest winner after the election of two new Governors in New Jersey and Virginia. Both Governors had campaigned with marijuana decriminalization as the centerpiece of their campaigns and it paid off.
So where is the smart money placing its bet on this multi-billion industry? Here is where we see plenty of opportunity at a reasonable price.

A FEW INTERESTING COMPANIES TO WATCH RIGHT NOW AND ALL OF 2018:

MariMed Inc. (OTCQB: MRMD), one of the best-performing Companies in the above-mentioned marijuana index is a relatively undiscovered firm involved in two business areas of the cannabis industry and is operated by a team of seasoned professionals who have major experience in the medical marijuana industry. In an industry littered with “me too” players and “get rich quick” types, it is extremely comforting from an Investment standpoint to see the type of general business pedigree, and more specifically, legal cannabis business experience that is MRMD.

MariMed Inc. (OTCQB: MRMD) has developed or managed 8 facilities in 5 states, which are cultivation, processing and dispensing operations. In addition, the Company also has 5 more facilities, which are under development coming online very soon. The revenue from many of these facilities has not yet started to hit the books yet, so 2018 is shaping up to be very interesting.

MRMD’s acquires land and buildings, in a strategic fashion, and renovates them into world-class, state of the art marijuana cultivation and dispensing facilities which produce and sell clean, safe and all natural cannabis for patients and consumers who care about what they’re buying. MRMD leases these facilities to state-licensed clients and provides ongoing management oversight for all operations. As landlord and manager, MRMD does not “touch the plant” for the purpose of federal laws.

These state Licensed Clients also pay MariMed several other fees in addition to rent. MariMed has considerable expertise in the legal cannabis space in many states (every state has a different set complicated rules of which to navigate). As such, they’ve become experts in winning state licenses for their clients—this earns MRMD fees. MariMed is also a growing and operations expert—they set up grow facilities and retail stores for Clients, as well as manage their general administration and security—this also earns MRMD additional fees.

The second side of the MariMed (OTCQB: MRMD) business is the development of the Kalm Fusion and Betty’s Eddies brands of unique precision dosed cannabis-infused products available in both THC and CBD formulations.

This provides the Company with a strong foot-hold on the higher-margin cannabis “consumables” or “edibles” industry done through a licensing model. We feel this business unit may be a strong short-term business catalyst for the Company.

These brands and products are licensed to MariMed’s clients, facilities managed by the team and other large players with strong distribution channels in the legal cannabis states.

Why Investors Should Care: In MariMed’s model, the Company simply provides licensees with the proprietary ingredients, the formulation process, the branded packaging and the specialized machinery to manufacture the products– The licensees provide the cannabis oils according to the product’s required specifications and the facility.

Once operations are set up, the initial manufacturing is done under MariMed’s supervision, and over time licensee staff is trained and certified by the MariMed team.

When the products are made and sold the licensee pays MariMed up to a 25% of wholesale as a royalty—which is why we say it could be a very explosive catalyst as license and royalty fees are highly profitable to the “bottom line”.

MariMed (OTCQB: MRMD) has lined up strategic licensees and manufacturers in state-licensed facilities across the country which could provide a distribution network for the Kalm Fusion and Betty’s Eddies potentially to thousands of dispensaries. This network will be a valuable asset of MRMD for not only their current brands but other new and innovative cannabis products they may wish to acquire or develop.

We feel MRMD’s branded edible products could eventually be in the majority of the major markets based on their initial reception; this would create a ubiquitous brand, with national recognition, which is the key to success with any consumer brand.

Consumers love them: The initial response from consumers for these products has been overwhelmingly positive– When we discussed the reception with MariMed’s cultivation operator in Delaware, his response was that he cannot keep them on the shelves.

Kalm Fusion and Betties Eddies have already started hitting the stores in several states of the country—they’re in 51 of 53 dispensaries in the state of Illinois, as well as dispensaries in Delaware, Rhode Island, Nevada, and Maine.

Licensees love them: Cultivators and dispensaries love the products because it provides them with new and innovative products which create a competitive advantage, generate more profits revenue and increase customer loyalty.

MariMed, Inc. became a 100% cannabis-focused public company in May of 2017. It continues to rapidly grow with new facilities and extensions of its brands as we finish out 2017. It has amassed a very impressive footprint as mentioned above. We believe that the assets being developed by the Company will generate substantial growth in 2018. Nevertheless, the Company has already been putting up some very impressive financials (see below).

Three other important factors Investors should know before we get into numbers:

We feel that all three of these facts create a very hospitable environment for the Company’s stock.

Corbus Pharmaceuticals (NASDAQ: CRBP) is another interesting player in the cannabis space, more specifically medical cannabis. It is a clinical-stage biopharmaceutical company focusing on rare, life-threatening, chronic inflammatory diseases with a pipeline composed of a novel oral endocannabinoid-mimetic drug.

In the past couple of months, the stock price has been on a sideways trend and the gains made after the news have largely been given up. With a current market capitalization of about $378.6 million and trading at $6.7 per share, we estimate that the upside potential here could be huge if the next phase yields similar results.

This is, however, a high-risk high reward opportunity considering that Corbus is staking its entire future on this single drug.

Emerald Health Therapeutics (OTCQX: EMHTF) is one of Canada’s producers of dry cannabis and cannabis oils for medical use. The stock is up at least 240 percent over the past year thanks to a number of factors but we still consider the current valuation of approximately $310 million to be modest.

This is because the company recently hired a new CEO with a background in drug development having previously worked in a number of biotech companies such as Eli Lily (NYSE: LLY). This move ties in quite nicely with the company’s plans to develop cannabis-based therapies going by this announcement.

In addition to this, the company announced a huge joint venture deal with Village Farms (OTCQX: VFFIF) which would contribute a 1.1 million square feet on 25 acres with Emerald Health contributing $20 million to the deal. The main idea here with the JV is to get production ready by 2018 ahead of the legalization of recreational marijuana sales in Canada which some experts estimate will require 600,000 kilograms of marijuana annually.

Finally, the Canadian government recently proposed a tax of one dollar a gram of legalized recreational marijuana. It said that the tax shouldn’t exceed C$1 ($0.79) a gram or 10 percent of the producer’s price, whichever is higher which should be another driver for Emerald Health if adopted.

MariMed Inc. is a paid client of The Cannabis Investor.