Five days ago, the state of Illinois made headlines when it was announced that a bill to legalize adult use cannabis was passed by the House of Representatives in a 66 to 47 vote.

The bill that would allow adults 21 and older to consume, possess and purchase cannabis from licensed establishments is now heading to Governor J.B. Pritzker’s desk for his signature. Gov. Pritzker made it very clear that he will sign the bill into law making Illinois the 11th U.S. state to legalize recreational cannabis.

“The state of Illinois just made history, legalizing adult-use cannabis with the most equity-centric approach in the nation,” Pritzker said in his Twitter post. “This will have a transformational impact on our state, creating opportunity in the communities that need it most and giving so many a second chance.”

Analysts expect Illinois to bring in somewhere in the neighbourhood of $500 million in new tax revenue from cannabis sales in their very first year. Illinois is a large new market and the right investments could produce substantial returns down the road. As an investor in the cannabis sector, the immediate question that comes to mind is, which public cannabis companies have operations in Illinois?

We did some digging and came up with the following list of U.S. multi-state operators (MSO) that could benefit greatly from the new Illinois cannabis market. Three of the companies we uncovered are currently public while the 4th company is set to IPO in the near future.

With the cannabis sector currently in the midst of another cyclical sell-off, it could be a very good time to consider an investment in these stocks. Like the old saying goes “Buy when there is blood in the streets.” Obviously, you need to do your due diligence first so let’s get started. 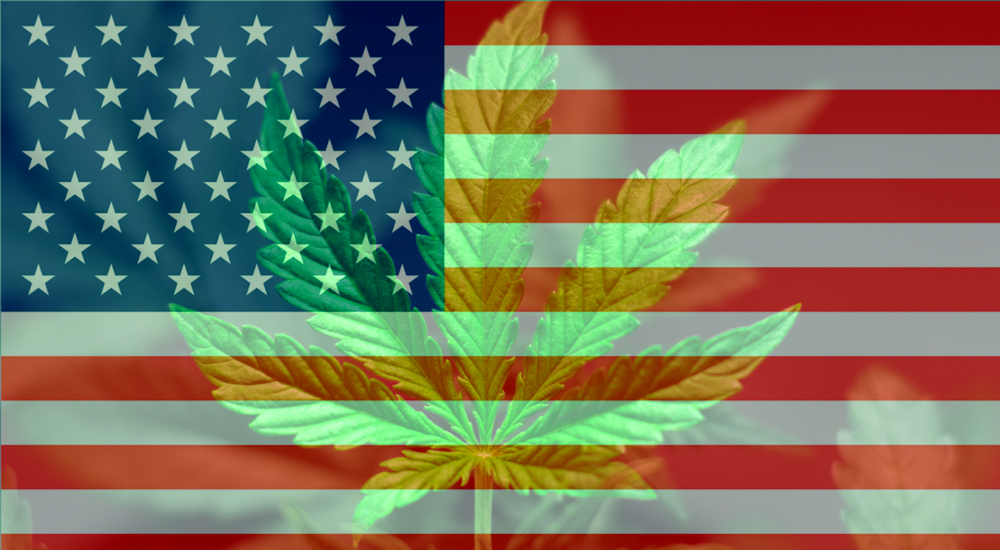 Red White & Bloom is the next major player set to hit the U.S. cannabis scene. The new multi-state operator is currently getting ready to IPO in the near future via their merger with Tidal Royalty (CSE: RLTY.U). As of now, there is no official IPO date but we expect to see the company make an announcement in the coming weeks to update investors. RWB is currently experiencing a strong first-mover advantage in Michigan which recently approved their own adult use cannabis laws. Michigan’s medical marijuana market got off to a hot start pulling in over $42 million in revenue in just its first 4 months. The new recreational market in Michigan is set to increase these numbers and will come online at the start of 2020.

With a strong foothold in Michigan RWB now has its sights set on the Illinois market via their recently announced LOI to acquire the world’s largest indoor premium hemp facility located in Granville Illinois. According to the Brightfield Group: “CBD is growing faster than cannabis in the U.S. and the hemp-CBD market alone could hit $22 billion by 2022. It’s been flying under the radar but is set to explode, having profound impacts on CPG and Pharma.”

Some highlights of the massive hemp facility include:

At the helm for RWB is former CannTrust (TSX: TRST) (NYSE: CTST) CEO, Brad Rogers. Brad is arguably the most successful CEO in cannabis industry history after founding and building up Mettrum for their eventual merger with Canopy Growth (TSX: WEED) NYSE: CGC). Brad then went on to lead CannTrust to the top of the Canadian space.

“We continue with our plan to rapidly expand from our base in Michigan and invest in scaled operations across the United States as we bring together additional components of our Multi-State Operator strategy,” stated RWB CEO Brad Rogers. “We have been making investments in IP, formulations, and brands as well as finalizing terms on a number of other transactions for our CPG rollout later in 2019. We believe these efforts will allow us to expand our presence expeditiously and help position the Company to be one of the largest national players in the rapidly expanding U.S. cannabis market.”

Stay tuned for updates on RWB including their highly anticipated IPO date.

The obvious number one choice for this list is Cresco Labs. The company’s home base is located in Chicago. Cresco Labs has proven themselves as a top MSO in 2019 and the stock has outperformed many of its peers. With a strong footprint already in Illinois, the new adult use laws will allow Cresco to significantly expand their operations across the state.

The company currently operates in 11 states with 22 dispensaries, 56 retail licenses, and 23 production facilities. This footprint easy puts Cresco Labs at the top of any MSO list. Cresco Labs is currently in the final stages of their acquisition of Origin House (CSE: OH) (OTCQX: ORHOF). Once completed Cresco will have roughly 1.5 million sq ft of cannabis cultivation space by the end of this year making the company one of the clear leaders in Illinois. The company recently reported strong Q1 2019 earnings. Q1 revenue came in at USD $21.1 million, up 313% year-over-year. Net loss for the quarter was USD $7.6 million.

Start Your DD on Cresco Labs: 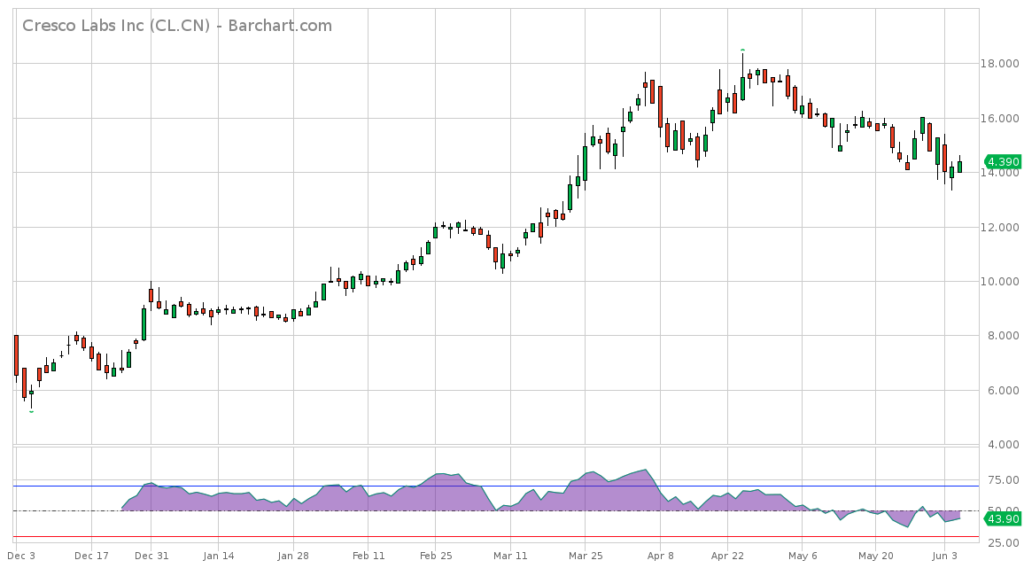 The second MSO on our list is MedMen. MedMen is known by many as the “Apple Store” of cannabis dispensaries. The company currently has 35 stores in operation and is doing business in 12 states. MedMen gained significant exposure to the Illinois market through their acquisition of PharmaCann. PharmaCann holds 4 retail and 2 cultivation licenses in the state serving nearly 80% of the Chicago area.

MedMen recently reported their fiscal Q3 2019 earnings where they reported revenue of USD $36.6 million. The company also reported a net loss of USD $63.1 million for the quarter. If MedMen can tighten things up in the coming quarters the stock could prove to be a bargain at these levels.

Start Your DD on MedMen: 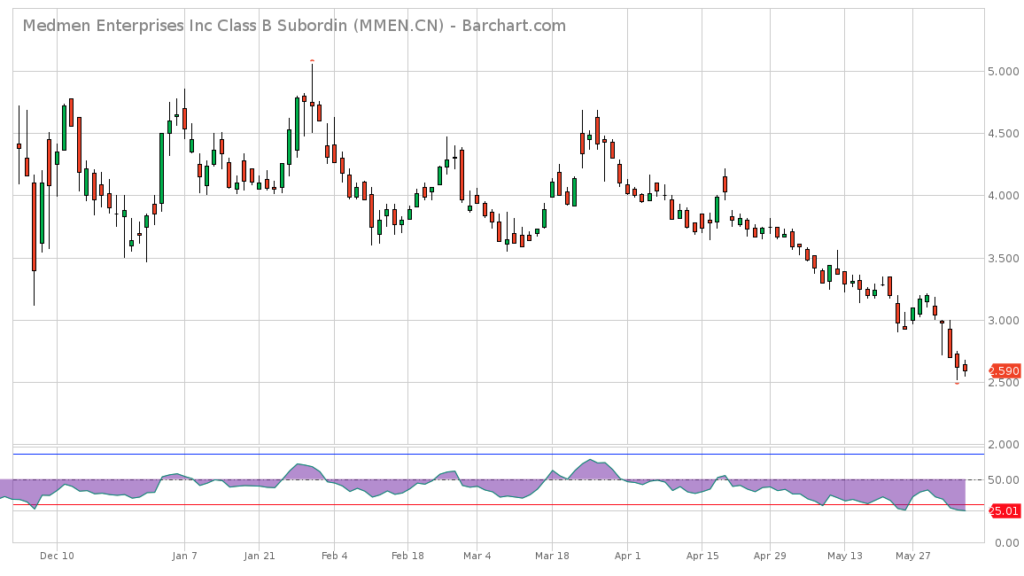 Like Cresco Labs, Green Thumb Industries (GTI) is also based in Chicago. The company does business in 12 states and has 71 retails outlets, 13 cultivation facilities, and a staggering 88 retail licenses. In Illinois alone, GTI has 4 cannabis dispensaries and 2 cultivation facilities. GTI has an additional 76 retail stores across the United States and is currently expanding in New Jersey, Massachusetts, Nevada, Florida, Ohio, Connecticut, and Pennsylvania.

On May 30, 2019, GTI reported record Q1 revenue of USD $27.9 million. This represents an increase of 155% year-over-year. Adjusted EBITDA for the quarter showed a gain of USD $4.9m while their net loss came in at USD $9.7 million. With the company is full-blown expansion mode this type of net loss can be expected. On a positive note, GTI’s net loss is nowhere near MedMen’s and with adult use legalization coming online shortly in Illinois investors can expect to see GTI’s numbers start to improve.

Start Your DD on GTI: 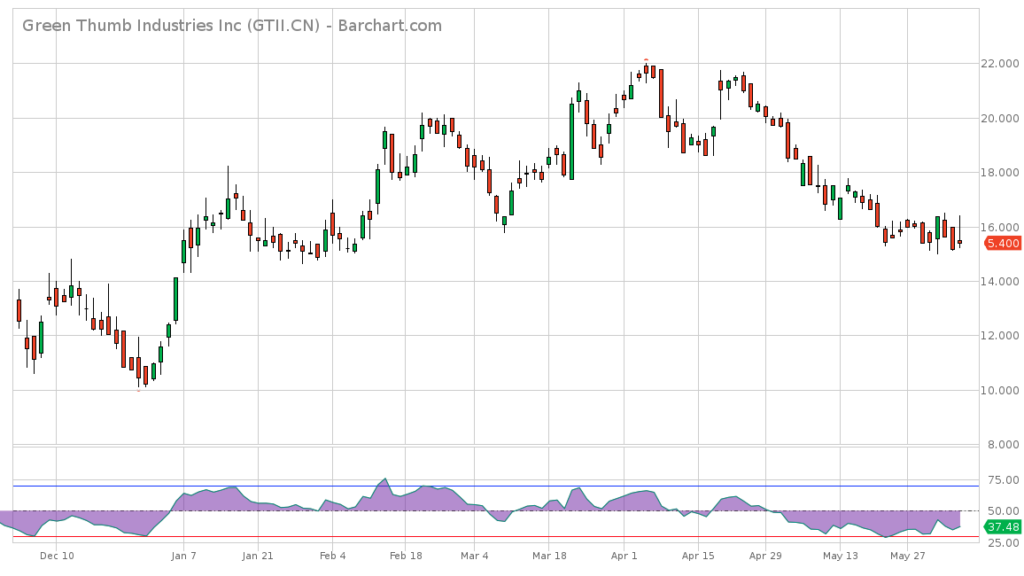