2 Top Ancillary Marijuana Stocks That Will Play an Integral Role in the Cannabis Boom 2.0 - The Cannabis Investor

2 Top Ancillary Marijuana Stocks That Will Play an Integral Role in the Cannabis Boom 2.0

Lately, it seems like every few weeks, the cannabis industry experiences another positive development. Whether it be a state taking a step toward legalization or cannabis companies posting better than expected earnings reports, there’s been no shortage of good news headlines.

The coming months should be no different, with the positive trend expected to continue. Cannabis banking reform is being included in the COVID-19 stimulus bill being put forth by Congress. The governor of New York recently said he wants to legalize cannabis to generate additional tax revenue to help the struggling state. Additional states are expected to join the growing industry by legalizing recreational sales in the upcoming November election.

These steps mean legal cannabis growing facilities are continually being built, upgraded and maintained. The supplies needed to grow indoor marijuana (and other plants) are called hydroponics. The U.S. hydroponics market is expected to grow to $16 billion by 2025, mainly on the back of the growing cannabis market. The two dominant players in the U.S. hydroponics market are GrowGeneration (NASDAQ: GRWG) and Scotts Miracle-Gro (NYSE: SMG) (FRA: SCQA).

GrowGeneration is Lighting the Way

Founded in Colorado in 2014 with a single store hydroponic store, GrowGeneration now operates 27 stores in 10 states, making it the largest hydroponic retailer in the U.S. The company also operates an e-commerce site at GrowGen.pro.

GrowGeneration (NASDAQ: GRWG) spent 2019 growing its business from 15 stores to 25 stores and added two more stores in 2020. Despite all this growth and the resulting costs to incorporate these new stores into the company, management was able to maintain profitability. To most effectively utilize its scale, the company rolled out an enterprise resource planning (ERP) platform.

The ERP allows the company to centralize various business functions, such as HR, accounting and purchasing, removing these costs from the stores themselves. This is one of the main factors that drove store operating costs as a proportion of revenue from 15% in Q1 2019 to 11% in Q1 2020, a 27% reduction. As GrowGen continues to add more stores and fully incorporates its newly acquired stores, store costs will likely fall below 10% of revenues in the coming months.

To improve margins, the company is developing several in-house brands. These brands will be focused on commoditized items such as nutrients and growing containers. While they currently account for only 2% of revenues, management is working to raise this to 10% of revenues by the end of the year. At an estimated 50% gross margin, these products should significantly raise overall gross margin from current levels right around 30%. Also, working to increase profitability is the company’s ever-increasing scale, allowing them to make larger orders at lower prices.

GrowGen has an aggressive growth plan for the next two years. The company expects to open 13 stores before the end of 2021. In addition to going deeper into states like California and Michigan, management plans to enter new markets, including Missouri, Illinois, Arizona, Pennsylvania, New York and New Jersey.

GrowGen’s management has done a tremendous job of balancing business expansion and maintaining profitability. The company is cash-flow positive and should be able to continue to fund its growth strategy with internally generated cash. The company also has nearly no debt on the books. Combine GrowGen’s macroeconomic tailwinds with their aggressive growth plan, profitable operations and pristine balance sheet, and you come up with a company that is poised to become a dominant player in the cannabis industry. Below is a snapshot of GrowGeneration’s income statement and balance sheet from its most recent quarterly earnings. 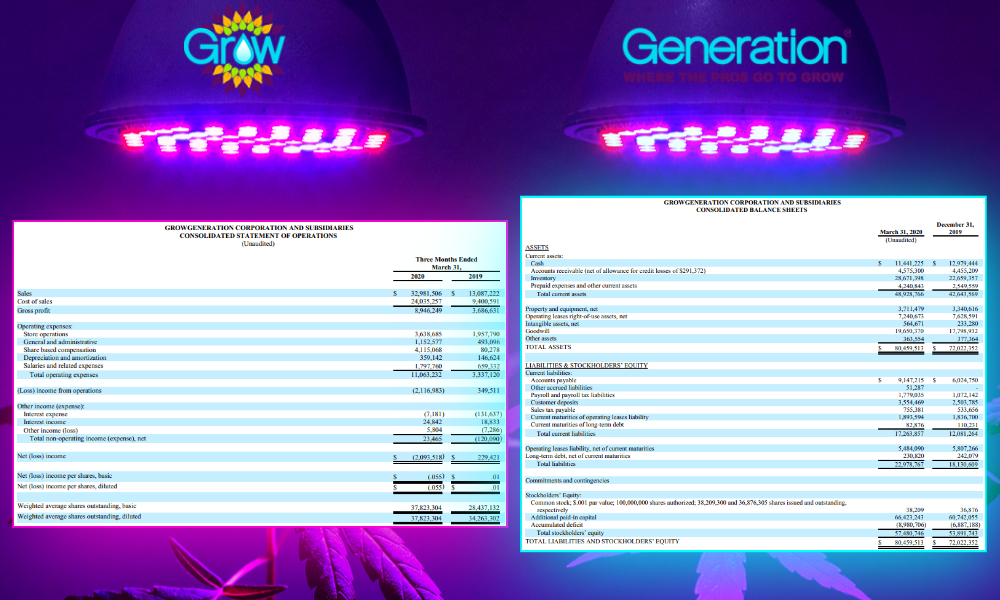 Also Read: This Under the Radar Cannabis Stock Was Actually Profitable in 2019

In business for more than 150 years, Scotts Miracle-Gro (NYSE: SMG) (FRA: SCQA) is a much more mature business than GrowGeneration. The company got its start as Scotts and sold lawn grass seed starting in the late 19th century. Over the next 100+ years, Scotts built itself into one of the leading lawn care companies in the U.S. In 1992, Scott’s merged with the Miracle-Gro Company, establishing the company we all know today.

Today, Scotts is one of the most recognized names in home gardening. The company’s products can be found in most large home improvement and garden supply stores throughout the U.S. Scotts is also the sole U.S. distributor for the ubiquitous pesticide Roundup.

After seeing multiple U.S. states legalize cannabis for recreational use, Scotts decided to get in on the green rush. In 2014, it formed the Hawthorne Growing Company, a subsidiary that would focus on supplying cannabis growers with the hydroponics and other supplies they would need. Since then, Hawthorne has acquired more than 50 different brands in products such as lighting, nutrients and growing mediums. In 2019, Hawthorne generated $671 million in revenue, up from $344 million in 2018, an increase of 105%.

Scotts carries the distinction of being one of the few cannabis-focused companies to not only continually post a profit, but also pays a dividend. The company’s dividend is currently $2.32 annually, which works out to a yield of about 1.5%. Scotts has raised the dividend ~5% in each of the last ten years. The company’s dividend payout ratio is currently below 50%, giving the company plenty of room to continue raising its dividend for the foreseeable future.

Like GrowGeneration, Scotts has an attractive looking balance sheet. The company’s current assets more than double current liabilities and are roughly equal to its total long term debt. Scotts runs a very capital-light structure, with only $16 million in cash on hand, but more than $1.1 billion in accounts receivable.

This capital-light strategy is possible because the company does not operate physical retail locations. Instead, it distributes its products through other companies, including GrowGeneration. The company also sells some of its products online, particularly the Hawthorne segment.

As expected, the Cannabis Boom 2.0 in the United States is boosting the revenues and profits of both GrowGeneration and Scotts Miracle-Gro. Below is a breakdown of key financial metrics for each company. 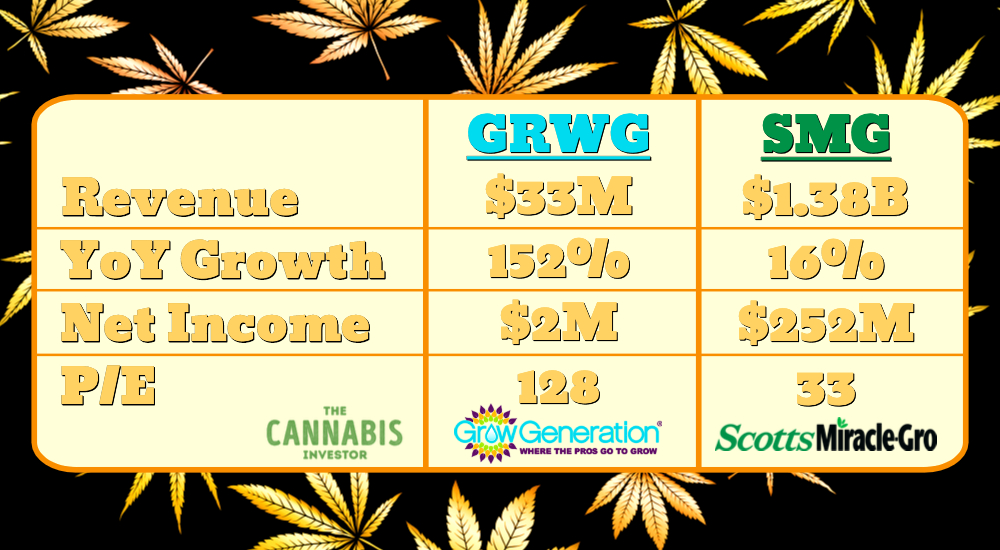 The steady march toward nationwide recreational cannabis legalization in the U.S. continues to progress en route to its inevitable destination. While most investors have been paying close attention to the cannabis producers and retailers, equally as important (and profitable) is the sale of cannabis growing supplies. Since they don’t touch the plant directly, this sector of the cannabis industry has the significant benefit of being legal pretty much everywhere in the world, including all 50 states.

GrowGeneration is a more speculative play on the industry, with its short operating history and relatively small size. The company does offer a significant amount of upside, as there are many new markets for it to enter. Scotts, on the other hand, is a much larger, more established company. While the Hawthorne Company is making leaps and bounds, it still only accounts for half of Scotts’ revenues. What Scotts loses to GrowGeneration in growth, it makes up for with its stability and dividend.

Investors that have a lower tolerance to risk, but still want to participate in the cannabis industry’s massive upside, should consider investing in the top two ancillary cannabis stocks GrowGeneration (NASDAQ: GRWG) and Scotts Miracle-Gro (NYSE: SMG) (FRA: SCQA). Even if your risk tolerance is high, GRWG and SMG are must-have pot stocks for any truly diversified cannabis portfolio.

Also Read: Cannabis Boom 2.0: Here’s Why ‘Some Pot Stocks’ Are Soaring Like We Haven’t Seen Since 2018

The Most Anticipated U.S. Weed IPO of 2020 is Drawing Near

The Wait is Nearly Over, TCI’s Weed IPO of 2020 is Almost Here